All aboard! A SLO-SF train is on the way

A new passenger train route connecting San Luis Obispo County with downtown San Francisco—known as the Coast Daylight—is on track for service within a few years, thanks in part to constant lobbying by local transportation officials. 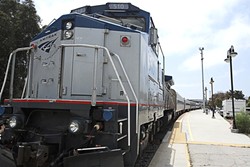 Some $25 million has been allocated from Proposition 1B transit funds to cover the costs of the new route’s required signal improvements and sidings, where passenger trains can wait for freight trains to pass on the single track rail line, according to Pete Rodgers of the San Luis Obispo Council of Governments, SLOCOG.

That’s the agency that lobbied successfully in the early ’90s for passenger trains to connect San Luis Obispo with Los Angeles and San Diego. The Pacific Surfliner, funded by 1990’s Proposition 116, has been carrying local riders south since 1995.

“The Pacific Surfliner corridor is really an untold success story—it’s the second busiest rail route in the U.S.A., after Boston/New York,” Rodgers said.

A special party for passenger trains is planned for National Train Day on May 10 at the San Luis Obispo Amtrak station, at Santa Rosa Street and Railroad Avenue. The date celebrates the completion of the transcontinental railroad in 1869, when the Golden Spike was driven to connect the tracks across the country.

From noon to 4 p.m., participants will be treated to railroad photography, a display of scale model trains, engineer’s caps and folding paper locomotives for the kids, and a volunteer host to help passengers plan their trips. Four trains are scheduled to arrive and depart during the afternoon.

Railroad fan David Weisman serves as a volunteer host most weekends at the Amtrak station in SLO, and he’s seen a marked increase in ridership in recent months.

“Central Coast residents are particularly lucky. Our trains traverse some of the most scenic mileage in the world, whether it’s 120 miles along the cliffs and bluffs of the Pacific Ocean to the south, or the twisting mountain passes and lush farmlands to the north,” Weisman said.

The prospect of reviving the Coast Daylight line, which ran between Los Angeles and San Francisco in the 1950s and ’60s, is “big news,” according to SLOCOG’s Rodgers. State officials are ready to fund up to eight new train sets, consisting of two passenger cars and a locomotive each, to cover the upsurge in passenger numbers, Rodgers said.

“Rail growth is unprecedented,” he noted. “California’s investment has been paid off several times over.”

The state’s total annual cost for all passenger train travel is $80 million. That’s the cost of just one highway interchange, such as the Prado Road interchange, Rodgers said.

Rail fares cover about half the cost of providing the service, with tickets from SLO to San Diego running about $50 each way, and a projected fare of around $30 to travel from SLO to San Francisco.

A California bond measure planned for the November ballot would provide $9 billion in funding for a high-speed rail route through the Central Valley, connecting Los Angeles and San Francisco with a three-hour travel time. But that measure has “nothing in it for the Central Coast,” he said.

SLOCOG is considering formally opposing the measure, and pushing instead for improvements in the coast rail routes.

As Rodgers concluded, “Passenger trains will be increasingly important as traffic congestion gets worse and gas prices rise higher. Plus the older demographic would rather sit on a train and travel more comfortably.”