All aboard for “The Unexpected Man”

The Brickyard Theatre in Atascadero stages dinner theater for charity 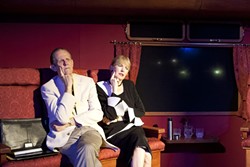 Parsky is ruminating on the bitterness of life—“It’s all so bitter; the curl of my lip is bitter”—but, despite his eloquence and the innate humor of his interior monologue, I’m finding it difficult to agree with him. In the proximity of a can-do couple like Anet and Charley Carlin, sitting in a softly warm courtyard and listening as the clacking of a train competes with the robust chirping of grasshoppers, it’s all but impossible to come down on the side of bitterness, especially when the proceeds of that night’s dinner and show will help fund San Luis Obispo County Medical Alliance’s scholarship for a nursing student at Cuesta College. Parsky may as well be tap-dancing with a sunflower bonnet on his head, because there’s no way this novelist in the twilight of his life is going to convert his audience to cynics.

Yasmina Reza’s The Unexpected Man is the ninth play staged at the Brickyard Theatre in Atascadero, which is, in fact, the Carlins’ courtyard rigged quite professionally with a stage and lighting. Volunteers with laminated signs proclaiming “Brickyard Theatre Shuttle” on their dashboard collect the evening’s guests in a parking lot adjacent to a softball field, and chauffeur them to the Carlins’ house so as not to clutter up the residential neighborhood with surplus vehicles. Additional volunteers prepare dinner for the guests—vegetarian, salmon, or chicken with a cheesecake chaser on the evening of Sept. 7. It’s a well-coordinated effort, and one that has raised somewhere between $75,000 and $80,000 for various county charities to date. Anet predicts that The Unexpected Man will tip the theatre over $90,000. What makes this feat all the more laudable is the fact that it’s been accomplished at a time when most local theaters are happy to survive from one show to another, content to create and share their art. At the Brickyard you’ll generally find theater with an experimental or surrealist flair, performed by actors who disprove the lament that it’s impossible to lure good performers away from the artistic hub of San Luis Obispo.

In this case, those performers are Gailee Walker Wells and Michael Siebrass, who are charged with essentially carrying on simultaneous monologues for 100 minutes without intermission, and with barely a word exchanged between them. The premise upends the tired old notion of a show based entirely on strangers—kindred spirits, of course—meeting one another and either parting company with great regret or plunging on a life-altering course by failing to part company. Upends it in the sense that Martha (Walker Wells) and Parsky (Siebrass) refuse to perform their theatrical duty and instead of conversing with one another, carry on with the rather mad internal dialogue to which no one but themselves is intended to be privy.

Of course, tumbling into a character’s head is a rather dangerous prospect, but Reza’s writing is so expert, so precise and yet meandering, that the adventure is one the audience rapidly embraces. As one might expect, neither Martha nor Parsky acquit themselves as saints. Martha is vain; errs on the side of melodramatic and catty toward her fellow women—justifying a male friend’s wandering eye by explaining that his wife ballooned up—and jealous of masculine attention. And Parsky is unapologetically racist and sexist—demonstrating these twin flaws most demonstrably by his obsession with a friend’s girlfriend, whom he refers to as “the flat-chested Japanese.” Neither character is punished for these particular faults, which might come across as a form of tacit approval in the hands of another writer, but one can’t help but glean that Reza is, perhaps, too mature for petty trials and judgments—that she does, as Anet explains, “write pretty grown-up plays.” Because if we can’t experiment, err, and discard ideas in the privacy and safety of our minds, then what frontiers are left to us?

Once you move past the obvious fact that there’s a very good reason we don’t share our every thought and musing, Parsky and Martha emerge as remarkably eloquent. Martha, in particular, embarks on flights of fancy and remembrance that make a swallow’s thrilling dives and spins look tame by comparison.

“Why is desire so extravagant compared to what actually happens?” she asks sadly. And as she works herself into a frenzy of grief over a male friend who married and no longer makes the time to flirt with her, departing the train compartment in a fit of tears, Parsky, the writer, battles demons of his own.

But Parsky’s not all comedy, though he does carry much of it in The Unexpected Man. He can also be counted on for fare the audience must chew and take time to digest, as when he launches into a critique of a certain kind of laughter used by theater audiences:

“Laughter congratulating itself on being intelligent enough to know why it’s being laughed,” he described. And the audience was notably quieter for several seconds after.

The audience is given the benefit of visual aids; the window in the train compartment has been transformed into a video screen displaying photographs relevant to whatever happens to be the subject of discussion. Penguins, when the monologue turns to Buenos Aires. But mostly people. It’s a mostly comic and visually interesting addition, though at times begins to feel arbitrary and distracting. This is also the case with certain sounds—primarily piano music—which are played to complement the dialogue. Siebrass and Walker Wells are sufficiently competent and engaging to carry the performance—yes, all 100 minutes of it—without this accessory, in particular.

The plot’s kicker—known to the audience and Martha—is that Martha is traveling with a copy of The Unexpected Man, which was written by Parsky. In fact, she’s a loyal and passionate follower of his work, leading to a supposed-to-be-private debate as to whether she should leave the book in her purse or reveal it, and herself, to Parsky. Whether or not she does this, and the consequences or lack thereof, I’ll leave to your imagination. I will say that I was disappointed with the ending, which felt like an abrupt attempt to wrap a bowtie around the entire affair and present it as something it was not. I have it on fact that other members of the audience disagreed with this assessment and preferred the ending as it was. We’ll call their faction wrong, and mine right—although I suspect that Reza would strongly resent the imposition of such starkly didactic terms on a play as unexpected as The Unexpected Man.

And anyway, as Parsky already said, in a kind of apology to readers everywhere:

“I wrote what I was capable of writing. Not what I wanted to.”