All-female bands aren't new. Back in the '30s, jazz acts such as the Blue Belles and the Harlem Playgirls proved that women could successfully enter what had largely been a man's profession. Rock was a little different, and the all-female bands of the '60s—Goldie and the Gingerbreads, the Pleasure Seekers, Fanny—were sort of considered novelty acts.

The '70s saw acts like the Runaways, the Slits, and the Raincoats prove that women could rock just as hard as the dudes, ushering in space for acts like the Go-Go's and the Bangles in the '80s and harder acts like L7 and Bikini Kill in the '90s. So, local all-female band Hot Tina is carrying on a long tradition, proving that penises are optional in the creation of ripping punk rock. 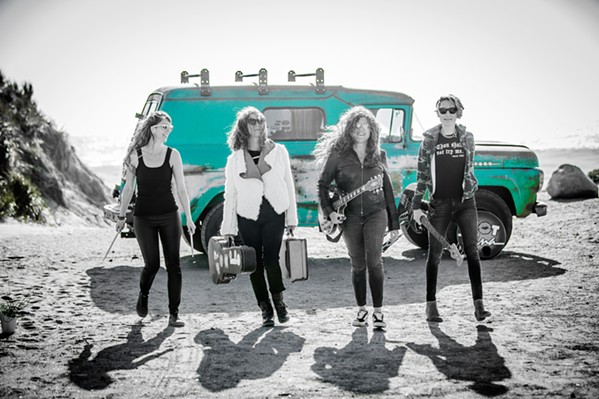 "Some guys do find it novel that we're an all female band," bassist and vocalist Alexandra Wenzl admitted. "We're at a point in our culture where having a woman in a band is not uncommon, but there's often an assumption that the female member is an accessory or the sultry lead singer. We're hoping that with each show we're helping to change that tired old narrative. What's truly novel about Hot Tina is not that we're women playing music, but rather the novelty of a band that writes its own original music and gives every ounce of passion and energy when we play live, whether it's to a bar with three people or a packed show of rock fans."

"In 2013 Shea [Kelly, guitar and vocals] and Rose [Hall, guitar and vocals] were rocking at local bars and parties as half of the good-time rock 'n' roll band the Dirty Pink Slips," Wenzl explained. "I was playing guerrilla street shows in the two piece acoustic-punk performance ensemble Trash."

The three co-frontwomen of Hot Tina knew of each other, but it wasn't until Twang N Bang Records owner Pat Hayes suggested Wenzl and Kelly collaborate on a cover of Wilco's "California Stars" for a show he was promoting at Frog and Peach that the collaboration began.

"Over the pandemic, while most of us were wallowing in self-pity, Tessa was practicing along to the Hot Tina demo she had recorded and emerged from quarantine as a badass drummer that knew all the HT hits," Wenzl explained.

The band has turned into a real sisterhood—four strong women who have each other's backs and share a love for rock 'n' roll.

"Life is full of ups and downs, and Hot Tina is our vehicle to ride those bumps, catch air, and feel that rush," Wenzl added. "Rattling the cages that society puts us all in through meaningful collaboration, high volume, driving riffs, and social commentary is what rockin' means to us. Whether or not we're your bag is not our concern; getting you out of your comfort zone and into our world is. Not everyone's comfortable when a group of women kick ass, but we unapologetically bring the rock whether or not it's what the audience signed up for. We hope through love, loud rock 'n' roll, and sick stage presence we encourage people to rattle their cages too!"

Just for the record, here's Wenzl's best brush-off line for drunk dudes trying to hit on her.

"'I'm sorry, no autographs,' and then I drop the mic and run for the green room."

Billing themselves as "The World's Most Authentic Tribute to Van Halen," the group recreates the band's early years with Ernie Berru as David Lee Roth in the same unmistakable costumes and signature screaming vocal delivery.

"Everybody Wants Some," "Hot for Teacher," "Finish What Ya Started"—you know you want to rock to all those classics!

Folk blues act Wolf Jett with opening act Balto plays SLO Brew Rock on Friday, July 9 (7 p.m.; all ages; free). Wolf Jett calls its sound "cosmic mountain gospel," and they came together in 2019 right before the pandemic struck. Their planned album and booked shows were postponed, but now they're ready to launch!

Beergrass country jammers The Mother Corn Shuckers play the Point San Luis Lighthouse on Saturday, July 10 (3 to 7 p.m.; $35 with a ride, or $20 if you want to kayak or SUP in; my805tix.com). Food and beverages will be available to purchase.

"The historic site will be open for touring, our gift shop will be open, and you'll see our docents in period attire on site for lighthouse storytelling," organizers said. "We provide chairs."

Soulful funk and R&B act Dante Marsh & The Vibe Setters play SLO Brew Rock on Saturday, July 10 (7 p.m.; all ages; free). This is one of the most popular bands in the county, and Marsh is a multiple New Times Music Award winner, including for Best Live Performance.

To Wake You celebrates summer 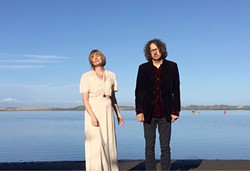 Ethereal folk duo To Wake You just released a gorgeous new single, "Summer (She Can Do What She Wants)," which personifies everybody's favorite season.

"You're in a long Scandinavian winter wondering where summer could be," explained the American husband and Danish wife duo of Mark Davis and Karoline Hausted. "Then you're in the blistering California heat wondering when summer might give you a break. Our pleadings to summer fill a lifetime and span the spectrum. Sooner or later, each of us is bowing down in deference to that which is beyond us. Summer—like the whole of nature—can do what she wants."

This lilting, hooky, and sunny song is exactly want you need! Hear it at ToWakeYou.lnk.to/Summer. Δ