All fire, no smoke for Nipomo 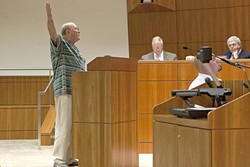 Even if a proposed marijuana dispensary fully complied with county ordinances, it seemed unlikely on Aug. 24 that San Luis Obispo County Supervisors would have allowed it in a community that didn’t want one.

In fact, community members who spoke out against the proposed dispensary said such a facility is unnecessary in a market already saturated with product.

“Anybody in Nipomo, any of our citizens, can get any kind of marijuana they want,” said Mike Murphy, chairman of the South County Advisory Council.

Robert Brody brought his application to open a dispensary before county supervisors on appeal after county planning commissioners turned down his permit application on May 27.

Supervisors unanimously rejected his appeal, saying the dispensary fell inside a 1,000-foot buffer zone to a nearby gymnastics studio, was unwanted by the community, and may not meet current medical marijuana guidelines in California under Proposition 215 and SB 420.

Brody, a stout 65-year-old with a Woody Allen quality to his voice, argued that his facility met county standards, would be safe for the community, and above all provides “safe access” to medical marijuana users in the area. Currently, local medical marijuana cardholders must travel outside the county or rely on a few delivery services.

“I’m asking you to give the people in your community the opportunity here to purchase it safely,” Brody told supervisors.

Safety turned out to be the biggest community concern, though no one seemed able to definitively say marijuana dispensaries are unsafe.

“I think we all read the newspapers, and we see what happens in other communities,” Sheriff Pat Hedges warned supervisors. But when pressed for studies linking crime and medical marijuana, he couldn’t cite examples.

“The illusion that it gives [is] that this type of activity in the minds of kids is OK,” Hedges continued.

Supervisors noted that a potential crime element is associated with dispensaries, but most questioned the fuzzy nature of medical marijuana laws in California and whether a “dispensary” is allowed.

“There’s still a lot of controversy in the law,” Supervisor Jim Patterson said.

County Counsel Warren Jensen advised that California’s laws don’t allow for dispensaries, only collectives and collaboratives. But Brody later clarified that though he had referred to his facility as a dispensary, it would be a tightly regulated collective.

“Medical Marijuana permits are being given out indiscriminately,” resident Rebecca Prewett said. “You can get one for PMS, and that’s ridiculous.”

Following the decision, Brody told New Times he had no intention to apply in another part of the community—and was doubtful others would, either.

“Based upon the overwhelming uninformed community people, there’s no way at this point we would consider coming into this area regardless of safe access and what the voters want,” he said. ∆