Local middle and high school students got a glimpse into the drama of our justice system recently when they participated in a series of mock trials concerning defendant “Cameron Awbrey,” a restaurant owner accused of human trafficking and false imprisonment of his employee “Lin Stark,” an immigrant from the fictional nation “Tanterra.”

Dressed accordingly in professional attire, each team featured prosecuting attorneys, defense attorneys, pretrial attorneys, witnesses, clerks, bailiffs, victims, and defendants. Volunteer professional attorneys and judges oversaw the series of competitive trials and rendered verdicts, and schools competed against each other twice, mounting a defense in one round and a prosecution in the other.

School teams could also bring in student journalists and courtroom sketch artists to chronicle the proceedings. On this page, you’ll find New Times’ selections for the first place courtroom drawing winners from middle and high school as well as the first place winner of the journalism contest.

Stark, a Tanterran immigrant, pressed charges of human trafficking based on the “abuse” she faced by Awbrey while working at restaurant Taste of Tanterra, according to prosecution attorney Jacob Nichols. He also alleged that Awbrey had purposefully locked Lin into her apartment on the night of March 9, 2016.

Defense attorney Fannie Osran argued in a passionate opening statement that there was “too much reasonable doubt” in this case to find Awbrey guilty of either charge. Stark, she stated, “had exactly the same freedoms we all have,” unlike a human trafficking victim, and she added that “prosecution cannot prove specific intent of my client on either charge.”

Stark, four months prior to Awbrey’s arrest, had accepted a job at the Taste of Tanterra as a first-time restaurant employee, needing a job to support her family in Tanterra. Awbrey initially told Stark that “money would be tight” in the beginning, and gave her room and board, utilities, and a salary averaging $425 a month.

Prosecution argued that this salary, including room and board, was barely over $2 an hour for Stark’s 90-hour workweeks. Defense countered that this was due to Stark’s slow work pace and “inexperience” in the restaurant business, as she was a salaried employee.

Stark calmly attested to her bad work environment. “I was suffering, mentally and physically ... Cameron yelled and even threatened to fire me, which would mean my deportation.”

Expert witness Addison Frey stated that Stark’s case was more consistent with that of an “overworked employee … not a human trafficking victim.” As a recent immigrant to the United States, “there may have been a cultural barrier that led her to misinterpret Cameron’s criticisms as yelling,” she explained.

On the evening of March 9, Stark asked Awbrey to take a break from work. The resulting argument ended when Awbrey slammed the self-locking door leading to Stark’s apartment and yelled that they had both better get comfortable, as neither of them could take a vacation.

This door, prosecution pointed out, was a fire hazard, and Stark was missing the key to unlock it. They argued that intent to punish Stark was shown by Awbrey’s statement through the door. Stark was locked in for the rest of the evening and a portion of the morning. 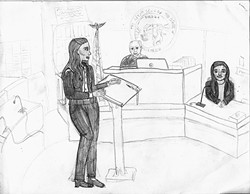 Awbrey stated on the stand that, “Yeah, I was angry, I shouldn’t have slammed that door, I’m really sorry now. But I truly thought Lin had her key to the door.”

Prosecution also brought up other quotations by Awbrey to show intent of human trafficking. In a verbal altercation with arresting officer Hayden West, Awbrey stated that, “Everything under [the restaurant’s] roof [was hers].” Prosecution argued that this statement was referring to Stark, and Awbrey treated Stark like property.

Defense attorney Madison Miller argued in her closing statement that, “Prosecution is using quotations out of context to misrepresent the facts. These statements have other plausible interpretations, and the ones pointing to my client’s innocence must be accepted by the court.”

In a pretrial argument, defense attorney Sophie Blanc brought forth a motion to remove the statement by Awbrey to officer West, stating that in the context of the statement, there was a violation of Awbrey’s Fourth and Fifth Amendment rights. The motion was denied.

Glen Starkey is New Times’ senior staff writer. He can be reached at gstarkey@newtimesslo.com.