All three 'Back to the Future' movies screen on Sept. 26 at Fremont Theater for a Special Olympics fundraiser

This Saturday, Sept. 26, Special Olympics hosts a fundraising event at the Fremont Theater where the Back to the Future trilogy will be screened in its entirety beginning at 4 p.m. Doc Brown’s DeLorean time machine will also be on display. 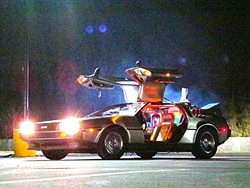 In 1985, co-writer and director Robert Zemeckis (Forest Gump) and executive producer Steven Spielberg (Saving Private Ryan) teamed up to bring Back to the Future to the big screen. It earned $383 million worldwide, making it the highest-grossing film of the year, spent 11 weeks at No. 1, and raked in a raft of awards.

The mind-bending plot revolves around Marty McFly (Michael J. Fox), who accidently travels 30 years back in time to 1955 in his friend Doc Brown’s (Christopher Lloyd) 1985 DeLorean time machine. You see, Marty meets Doc late one night in a mall parking lot to see him test the machine, with a “flux capacitor” powered by plutonium Doc stole from Libyan terrorists. But before Doc can test the machine, the Libyans appear and gun him down, and Marty, in his attempt to escape, jumps in the time machine and ends up in the past.

Marty meets his future father, George McFly (Crispin Glover), whom he saves from an oncoming car, which instead knocks Marty unconscious. When he comes to, he’s being tended to by his future mother, Lorraine (Lea Thompson), who becomes infatuated with Marty instead of George, who would have been hit. Now that Marty has interfered with the past, the future has potentially been altered, so Marty goes in search of the 30-year-younger Doc to figure out how to get Marty’s parents together and send Marty back to the future.

One of the reasons the films were so successful is their inventive and intelligent exploration of time travel conundrums. If Marty has prevented his parents’ romance by traveling back in time, he’ll cease to exist, and indeed, he sees his image fading away on a family photo. But if he ceases to exist, he can’t have gone back in time and disrupted his future.

As now-deceased film critic Gene Siskel said, “Nobody says anything that doesn’t become important to the plot later.”

The film’s got great topical humor, too. As Marty comes to, he asks Lorraine, “Calvin? Wh  … Why do you keep calling me Calvin?”

“Well, that’s your name, isn’t it?” she responds. “Calvin Klein? It’s written all over your underwear.” 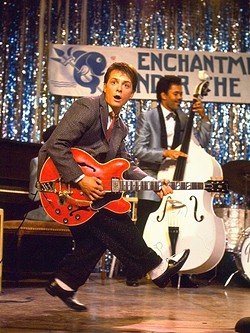 To give you an idea of the film’s importance in pop culture, President Ronald Reagan even referred to it in his 1986 State of the Union Address, saying, “Never has there been a more exciting time to be alive, a time of rousing wonder and heroic achievement. As they said in the film Back to the Future, ‘Where we’re going, we don’t need roads.’”

The two subsequent sequels continue to follow Marty and Doc’s adventures. In part II, they travel into the future to 2015, an alternative 1985, and a 1955 where Marty must repair the future while avoiding himself from the original film. In part III, Marty travels back to 1885 to rescue a time-stranded Doc. All three films are a hoot, and Special Olympics is a great cause. Whether you’re seeing the films for the umpteenth time or bringing your kids for their first Back to the Future experience, there’s no place better than the big screen at the Fremont to witness the fun.

“If my calculations are correct,” says Doc of his time machine, “when this baby hits 88 miles per hour, you’re going to see some serious shit.”