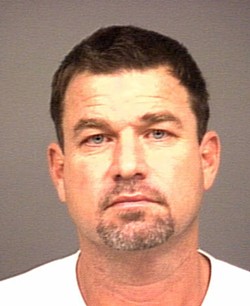 The woman allegedly assaulted by Arroyo Grande Councilman Edward Arnold, Jr., said in a restraining order filed Dec. 25 that Arnold threatened to kill her and blamed her for the breakup of his marriage.

She states in the document she once had sexual relations with him and refers to his estranged wife as her girlfriend.

In the documents, the alleged victim said, “Ed Arnold and I had a few sexual encounters. And Ed Arnold stated that he was obsessed with me.”

She also described the attack in detail, alleging Arnold bludgeoned her from behind with a club, covered her mouth to keep her from screaming, threatened to kill her, and brought—but didn’t use—zip ties to aid his attack.

Kathryn Arnold also filed a restraining order against her husband.

New Times was unable to contact Edward Arnold, Kathryn Arnold, or the alleged victim for this article. Arnold has told other media he will refute the allegations in court.