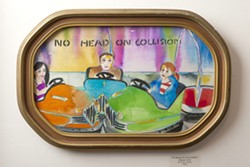 Watercolorist Tracy Taylor never goes to art shows, she said, though she attends county fairs quite regularly. But after seeing photographer Barry Goyette at the Mid-State Fair last year, she made an exception. She got dolled up and went to his next photography show, hoping for a glimpse of carousels, fortunetellers, and carnies through Goyette’s trained eye.

To her great dismay, there wasn’t a single fair picture at Goyette’s show, something she immediately brought to his attention.

“I remember she walks up to me in the middle of the show, and she’s like, ‘Where’s the fucking fair stuff?’” Goyette recalled.

Taylor’s indignation led her to propose a collaborative art project based on the Mid-State Fair, and Goyette accepted. The resulting “Tilt-a-Whirl,” hanging at the Steynberg Gallery, offers viewers a glimpse of a strange slice of Americana. While Taylor’s watercolors mimic the optimistic artifice of the fair experience, much of Goyette’s photography depicts the tough, leathery nomads—carnies—who build the fair from the dust up every summer.

It’s a fantasy land with a gritty underbelly: Games are rigged so you never really win, but before you realize this, you’ve shelled out three rounds’ worth of cash to play them, dazed by the flashing lights, tempted by the prospect of a goldfish in a Ziploc bag or a plush, human-sized platypus. In the background, children obliviously squeal their way over the top of a glittering Ferris wheel or rocket across the sky aboard the Hammerhead, their lives in the grease-smeared hands of a few nameless migrant workers. These people fascinated Goyette.

“Based on what I could see,” Goyette said of the carnie social sphere, “there are three or four cultures in there.” First, there’s the classic “lifer” carnie who’s been working the fairgrounds forever, he said.

“I met a woman there who’d been out there for 53 years,” he elaborated. Several others he met had been working three or four decades. Those are the carnie we recognize, he said.

But this group, he added, is a dying breed, largely giving way to immigrant labor. While some of the new carnie generation is Mexican, many are eastern European, hailing from Georgia or the Ukraine.

The ticket takers are often younger people, a contrast to the “rougher” ride operators.

“You see a lot of guys who have done some time,” Goyette said, “a lot of mental issues, and alcohol or drug issues.” The people who run the games, he said, are “not really part of the main show,” though they reel in a pretty mean profit through hustling crowds. Goyette said of one man he photographed, Gary, “You watch this guy work, and it’s masterful.”

While most fair workers he met greeted him with smiles, Goyette was taken aback by the dark past many carnies shared, coupled with “a severe lack of self-esteem,” as one of his subjects put it, for whom “fair” must be an ironic term.

“He said, ‘As a class of workers, we are discriminated against. Honestly, if we go off the fairgrounds, we’re in danger. We’ll get beat up by locals, because they’re fearful of us,’” Goyette said.

It’s strange to think that the same people who might entrust the ride operators with their children’s safety would treat them with such disrespect. Taylor and Goyette’s show underscores this peculiarity.

On one wall are Taylor’s happy watercolors of prized pigs, goldfish, bumper cars, and corndogs. Sometimes pigeonholed as a “cute” artist, Taylor said the preciousness of her paintings is a trait she can’t escape: “Even if I’m hating on the world, I paint beautiful pictures. If I could do it differently, I would. I’ve tried.”

On the second wall are large black-and-whites of fair workers, faces smudged, their scars a roadmap of their past.

“I didn’t expect to see the damage,” Goyette said. “That’s something that’s really apparent to me. And you don’t know what it’s from, whether it’s from mental issues and drugs or life. But everybody out there seems to have a little bit of that in their past.”

Then, the mood changes again, to one of glazed excitement. The photographs are an over-stimulated general absorption of a lot of colorful, shiny things—without much focus on any one of them. Close your eyes and try to recall the last fair you attended. This is what your memories look like: happy and vague.

Fittingly, on the other side of this wall are grimier, more realistic photos. A wary little girl on a ride eyes its operator with disdain, a shot that, Goyette says, defines the carnie’s struggle.

Originally, a third artist, Heidi Harmon, who works in trash and found objects, was also going to be part of this show. But Harmon dropped out shortly after the trio’s initial visits to the fair, something Goyette attributed to a clash of personalities.

But really, the entire show clashes gloriously. Goyette and Taylor couldn’t be more dissimilar, both as artists and as individuals. December makes images of the sticky, hot Paso fair all the more surreal, all the more ridiculous. And it turns out ex-cons make the merry-go-round go round. Who knew?