'Alpha' is a charming but flawed film for adolescents

Albert Hughes (Menace II Society, From Hell, The Book of Eli) helms this adventure story set 20,000 years ago in the last Ice Age, about a young man named Keda (Kodi Smit-McPhee), who, after a steppe bison hunting expedition with his clan goes awry, finds himself alone and struggling to survive. After he encounters a lone wolf, he begins to forge the bond that will develop canines into man's best friend. (96 min.) 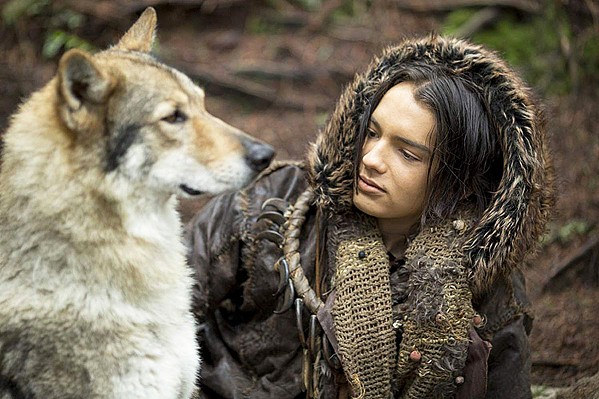 Glen This mostly charming fantasy adventure that imagines the first human-canine partnership will definitely appeal to adolescents. Its protagonist, 22-year-old Australian actor Kodi Smit-McPhee, looks about 15 or 16 years old, and it's a coming-of-age story about the transition from boy to man. After opening with the hunting expedition and its ensuing mayhem, the story cuts back in time to the moment Keda proves himself worthy of his first hunt and the ritual initiation that follows. We witness clan life, which is rough but romanticized in the same way we romanticize Native American tribal life. In fact, the film's language is a North American Indian dialect, subtitled in English. Keda is the son of Tau (terrific Icelandic actor Jóhannes Haukur Jóhannesson), the clan's leader, but unlike his strong father, Keda "leads with his heart, not his spear," as Keda's mother, Rho (Natassia Malthe), worries. She's concerned about her son's safety during his first hunt, and rightfully so. On the long journey to the hunting grounds, the clan is imperiled by saber-tooth tigers, among other predators, and the hunt itself is extremely dangerous as the herd of horned bison can easily trample and maim. During the trip, we learn more about clan life and its beliefs and rituals. The second half of the film, which is slower in pace, is about Keda's alliance with Alpha (Chuck), the wolf, and their struggle for survival as Keda fights to make his way back to his clan. There's some beautiful cinematography, but there's also a lot of computer-generated graphics, mostly of the prehistoric wildlife, which sadly is pretty clunky and pulled me out of the story. The tale itself is saccharine sweet and too sappy overall. Finally, having read some about the theoretical roots of the human-canine alliance, the story itself feels contrived. I'm usually a sap for films like these, but in this case it never suspended my disbelief.

Anna Alpha hits the mark as far as a coming-of-age story goes, but I too was distracted by the CGI, and the slow plodding second half of the film felt repetitive. That being said, the bond between Keda and Alpha is endearing, and while it certainly doesn't ring as a true telling of man's first bond with dog, it presents a harrowing fictional account. The tribe's annual buffalo hunt takes place on the precipice of a huge gorge and is by all accounts very dangerous for even seasoned hunters. Then we travel back to a week earlier, when Keda's spearhead-making skills prove him ready to join the men on the hunt. While he may be able to make a fine spear, his ability and willingness to use it to kill has yet to develop. Things go awry on the top of the gorge, and Keda is by all accounts thought dead. His heartbroken father and tribe start their journey home, and when Keda awakes he must do the same all on his own. He manages to fend off a group of wolves, injuring the one he will soon form a bond with. After this point, the film starts to feel repetitive as Keda and his new companion battle life in the wild through trials and tribulations, as winter approaches and across vast expanses of land. It does have some beautiful scenery—the sweeping landscapes are particularly gorgeous—but there just wasn't enough there to pull this film out of mediocrity for me.

Glen Most of the second half of the film is Alpha and Keda's exploration of each other's boundaries and Keda establishing that he's the superior in the relationship. They're continually searching for food. Sometimes Alpha is the one feeding Keda, but that doesn't stop Keda from disciplining Alpha to wait her turn to eat. I suppose this was meant to add realism, but Keda came off as a bully and ingrate. On the way to the hunting trip, Keda is tattooed with a star pattern that's meant to guide him home, and much is made about him following this map back to his clan, the trail marked by stone cairns supposedly stacked by the clan's ancestors. This depiction of the hunter-gatherer lifestyle is certainly interesting, which made the first half of the film more engaging. The trip home frankly gets tedious and repetitive, and the film's ending doesn't quite deliver the feel-good accomplishment I was hoping for in a bildungsroman about a soft-hearted boy finding the inner fortitude to survive a long, treacherous journey and reunite with his clan as a man. The film's been getting better reviews than I'm giving it—84 percent on rottentomatoes.com—and audiences seem to like it too (79 percent), so if this sounds like your kind of film, it's probably worth a trip to the theater. I think the big screen will do better justice to the cinematography than the small, but honestly, the film has too many flaws for me. I'd say at most it's worth a rental at Redbox.

Anna I agree that this film may come off better on the big screen, but it doesn't deliver enough for me to warrant the price of a ticket to the theater. I'm a little surprised by the fairly high marks on Rotten Tomatoes, especially that critics are giving it high praise. It feels too sweet and sappy for me, and again, some of the CGI was pretty off-putting. If it's meant for middle school aged kids with a penchant for adventure, maybe it does hit the mark as far as storyline goes, but for me it fell flat, and the slog through the snow Keda and Alpha endure gets boring pretty quick. At one point Keda and Alpha go their separate ways after Alpha's pack comes upon them. While she protects Keda from her fellow wolves, ultimately she rejoins her family, and Keda continues on alone. He doesn't fair well without his companion though, and when he falls through the ice, Alpha comes to the rescue and rejoins his journey home. The ending definitely had my eyes rolling and while I won't give away the final reveal, let's just say it's far too easy of a choice and much too ludicrous a reality for the filmmakers to make. This film isn't all bad, but unless you've got some preteens you're looking to inspire, save this one for when it shows up as a rental or on your streaming service of choice. Δ