In the mid-’90s, the alt-country genre developed via the likes of Uncle Tupelo, Whiskeytown, and the Drive-By Truckers, among others, and the Old 97’s were right in there with them.

Formed in Dallas in ’93, the self-described “loud folk band” started playing bars but toured the country following the release of their debut album, Hitchhike to Rhome. I didn’t really come upon the band until their 1997 release Too Far to Care, their third LP, which opened with “Timebomb”—still one of my all-time favorite songs. 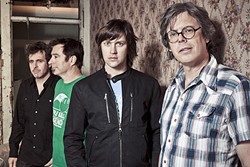 “I got a timebomb, in my mind Mom./ I hear it ticking but I don’t know why./ I call the police, but they don’t like me./ I hear ‘em whispering when I walk by./ I got a landmine in my bloodline./ I’m not immune to getting blown apart./ She’s like a claymore, that’s what she’s there for./ She’s waiting ‘round here to get blown apart./ Having her on my brain’s like getting hit by a train,/ She’s gonna kill me. Oh Celeste, oh Celeste.”

This Saturday, March 25, Good Medicine Presents and Numbskull Productions will bring the Old 97’s to the Fremont Theater (7 p.m.; all ages; $21 presale at Boo Boo’s or ticketfly.com, or $25 at the door).

Amazingly, these many years the band has retained its original line-up: Rhett Miller (guitar and vocals), Murry Hammond (bass and vocals), Ken Bethea (lead guitar), and Philip Peeples (drums). Their name comes from the train song “Wreck of the Old 97,” and all told they’ve released 11 studio albums, most recently Graveyard Whistling last month.

The new music is just as hooky, jangly, raucous, and well-written as ever. Miller explained that this follow up to their previous album Most Messed Up—which he called a “wheels-off account of life as a musician, life on the road”—is more about the “aftermath.” One standout track is “Good with God,” which Miller co-wrote with Brandi Carlile. 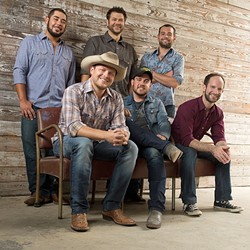 According to Miller via the band’s website, “[The album] grapples with spirituality and mortality. Our songs normally hide deeper meanings in the subtext, but they’re more on the surface for this record.”

He set about responding to the life-on-the-edge themes of Most Messed Up, considering titles such as The Hangover and The Aftermath before settling on Graveyard Whistling.

“That felt like the theme to me—dealing with knottier ideas, taking a lighthearted approach to something much bigger. The trick Old 97’s have held on to is to take a song that may have a darker theme and present it as something to be screamed along to in a club. I don’t want to sing sad songs in a sad way. You don’t even realize there’s a tombstone sticking out in the middle of it until the eighth or 10th listen.”

Through it all, the four are still a band in the truest sense of the term: “I think our longevity can be attributed primarily to our friendship and ability to overcome those moments when egos want to overtake and obliterate everything in their path,” Miller said. “We’re just very lucky to be able to do this for a living. It’s insane and beautiful and we never, ever take it for granted.” 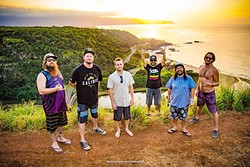 Ha Ha Tonka, which released their new album Heart-Shaped Mountain earlier this month, will open the show. In press materials, they call the new recording an “album about love and growth. At a time when divisiveness fills the headlines, Ha Ha Tonka is fighting the good fight and building narrative tributes to friends and loved ones, memories past, and prospects of the future. They five-part harmonize on intimate familiarities—the nascent stages of relationships, deep and lasting bonds, maturation, fear, and loss.”

You should also mark your calendar for country act the Josh Abbott Band, playing a Good Medicine show next Thursday, March 30, at the Fremont Theater (7 p.m.; all ages; $20 presale at Boo Boo’s or ticketfly.com or $25 at the door). They’re touring in support of their fourth album, Front Row Seats.

Peace, love, and unity—those are the themes you’ll hear in the music of So-Cal reggae act Fortunate Youth, who are currently touring in support of their new self-titled album. They're slated to play SLO Brew this Thursday, March 23, with opening acts Josh Heinrichs and Iya Terra (10 p.m.; 18 and older; $15 general admission or $30 for admission and a signed album on ticketweb.com).

Fortunate Youth has spent the last seven years touring nearly non-stop, which helped propel their albums to No. 1 on Billboard’s reggae chart. They’ve also raised more than $50,000 for charities ranging from Cancer Awareness to helping children who have lost music programs due to underfunding.

The space between nostalgia and longing

Snowapple returns to the Steynberg Gallery this Wednesday, March 29 (7:30 p.m.; all ages; $15 tickets; call 547-0278 for reservations), touring in support of an extended version of their album Tracks—“a themed album with brand new songs about traveling between nostalgia and longing,” according to the trio. “They are folk songs, soulfully sung, and they always keep the rhythm of a train that takes you from the Baltic plains to the African savannah.”

The trio features three gifted multi-instrumentalists from Amsterdam, and much of their music is about their own extensive travels as well as the travels of others: “for instance, the fatal wandering through the Sahara of Isabelle Eberhardt, or the one way journey that someone makes leaving his devastated country.” 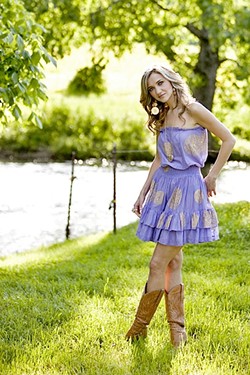 Humboldt County-based Diggin Dirt plays Frog and Peach on Thursday, March 23 (10 p.m.; 21-and-older; free). Formed in 2011, they’ve been delivering everything from roots rock reggae to Afrobeat to heavy funk to appreciative audiences. “We search the earth for the dirtiest of grooves to make you dance and enjoy every bit of life,” the band said in press materials. “You gotta dig that dirt!”

Acclaimed singer-songwriter Sarah Darling plays Eberle Winery this Friday, March 24 (7 p.m.; $20 tickets at eberlewinery.com). She recently released her third album, Dream Country, as well as her new single “Where Cowboys Ride.” She’s had more than half a million downloads worldwide and two No. 1 videos on CMT and GAC. Her biggest hit, “Home to Me,” led to performances on Conan O’Brien, Fox & Friends, and opening spots for Carrie Underwood and Kacey Musgraves.

Berkeley-based singer-songwriter and multi-instrumentalist Simon Lunche was just 9 years old when he formed his band The Blondies, which he helmed for nine years before going solo. He’s also Gibson Guitars’ youngest endorsed artist in the famed guitar manufacturer’s 114-year history, and his velvety voice has been compared to Jeff Buckley, his music to The Beatles. He plays Linnaea’s Café this Friday, March 24 (7 p.m.; all ages; pass the hat). 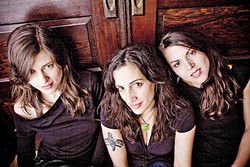 Beloved folk act and Red House Records recording artists The Wailin’ Jennys play this Saturday, March 25 (7:30 p.m.; all ages; $38 to $56 tickets at 756-4849 or online at calpolyarts.org), at Harman Hall of the SLO-PAC, in support of their new album Bright Morning Stars. The trio started serendipitously when three singer-songwriters got together for a one-time-only performance at a tiny guitar shop in Winnipeg, Manitoba. Now they’re loved worldwide.

The Byrom Brothers dance concert happens this Saturday, March 25, at Mongo’s starting at 9 p.m. Monty Byrom has written songs for Eddie Money, The Stray Cats, The Knack, and David Lee Roth among others. He also fronted Billy Satellite, New Frontier, and the Academy of Country Music-nominated Big House.

Get your dose of hot swinging jazz this Sunday, March 26, when the Basin Street Regulars hosts the Midnight Rose Jazz Band for two sets as well as the outstanding Cabrillo High School Jazz Band playing intermission, in the Pismo Vets Hall. There’s an open jam starting at 11 a.m. (bring your instrument), followed by the dance concert beginning at 1 p.m. ($10 admission at the door).

Get out and sing!

On Saturday, March 25, the brand new Templeton Harmony, “an all ages—no audition community choir and service group,” will form at 1 p.m. at the Templeton Park Gazebo.

“Love to sing? Want to sing with others? Never sung in a choir? Want to help those in need? Then this is the perfect opportunity to sing and shine!” organizers said.

There is no cost to join Templeton Harmony; the only commitment to participate is agreeing to work with the group on one or two community service projects each year. For more info, call Matt’s Music at 237-0054 or email matt@mattsmusicandmore.com.