Alt debutantes from Down Under

I don’t pretend to know the minds of teenage girls (or the minds of grown up women, for that matter!), but I imagine a lot of gals would happily trade their lives for the lives of 23-year-old twin sisters Lisa and Jessica Origliasso. 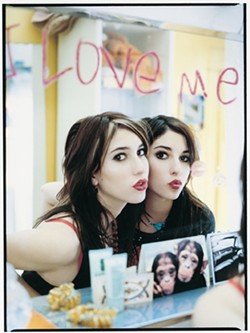 For the past two years or so, the Brisbane, Australia-based sisters have enjoyed a fairy-tale career that began with the release of The Secret Life Of, their debut album that sold 300,000 copies in Australia and paved the way for Hook Me Up, their sophomore record that’s soaring to multi-platinum sales levels, thanks to several top five singles.

The twins seem to have the world media a-twitter. Teen Vogue called their debut album both sweet and vicious. The record debuted at number three on Billboard’s Heatseekers chart. The Veronicas were named a “Breaker Artist” by AOL and called “Australia’s rockingest twins” by Blender. The girls were also praised by Entertainment Weekly “for making most of their female pop-rock rivals seem like jugheads.” The New York Post called them “the real thing.”

On top of that, they were soon being hailed as glamour girls of the first order, appearing in Calvin Klein’s Choice campaign and being feted by Teen Vogue and Jane magazine. They recorded the title song for the WB show Related and appeared as themselves in an episode that aired in 2006, the same year their debut album’s first single 4Ever was featured in the Amanda Bynes comedy She’s the Man.

“These last few years have been crazy,” said Lisa on the band’s Web site. “We recorded two amazing records, toured the world with our bad-ass band, and had a taste of superstardom in Australia. We actually have our own clothing line! Can you believe that? Now it’s time to really turn up the heat. And are we ever looking forward to it!”

Check out The Veronicas on Tuesday, July 8, during this 8 p.m., 16-and-older show. Presale tickets cost $12 at Boo Boo’s and the venue. Local girl band Jade will open.

Do your patriotic duty … to listen to live music

If you still can’t decide what to do with your Fourth of July, it can’t be due to a shortage of choices. There’re plenty of events on both July 4 and 5. 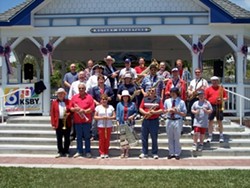 Paso Robles’ Denner Vineyards (5414 Vineyard Dr.) is hosting a pig roast and barbecue with all the fixin’s by Chef Charles Paladin Wayne from noon to 4 p.m. Music by jazz act The Pat Cormick Group will run from 12:30 to 4 p.m. Tickets cost $30 for Comus Club members or $35 for the general public. Get tickets online at dennervineyards.com or call 239-4287.

The Arroyo Grande Village’s Annual 4th of July Celebration will again be presented as part of the Village Summer Concert Series. The free concert starts at 1 p.m. at the Rotary Bandstand on the Village Green in the Historic Village of Arroyo Grande. The Village Band, under the direction of Gary Thompson, will present a program of stirring patriotic and popular music, while the South County Historical Society sets the mood with traditional red, white, and blue decorations, period costumes, and a barbecue.

Pozo Saloon hosts a four-band rock’n’roll extravaganza starting at 5 p.m. with Sexy Time Explosion at 5 p.m., followed by more dangerous rock’n’roll by The Supersuckers, Nashville Pussy, and headliners The Reverend Horton Heat. Gates will open at 4 p.m., and tickets are available at local Vallitix outlets, including Boo Boo Records, the Mustang Ticket Office at Cal Poly, the Mid-State Fairgrounds; or online at vallitix.com. Don’t get cute and bring any fireworks with you. It’s dryer than a tinderbox out there. 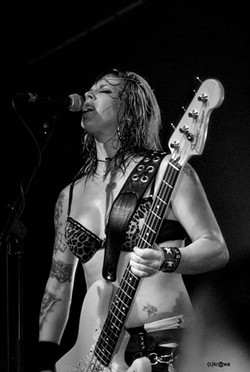 If you’re in Cayucos watching the fireworks, instead of piling into your car and nudging through bumper-to-bumper traffic, head over to the Cayucos 4th of July Reggae Party at O’Neills Coffee House (aka—Club “O”; 72 S. Ocean Ave.; 995-1968), for a $4 reggae show featuring Ras Danny, DJ Katchafire, and Morning Rise Sound. The show starts right after the fireworks end.

The First Annual Firecracker Boogie features blues/rock/soul act Dr. Danger along with Skye Ferguson, Nicky Shane, and many other guests during a barbecue fundraiser for the North County Humane Society’s Shelter at Biddle Park, between Arroyo Grande and Lopez Lake. Festivities commence at 1 p.m., with barbecue and cold drinks available while they last. There is a $2 park entry fee and event organizers will be passing the hat frequently for contributions to the survival of this important local resource.

Head to the Americana Picnic in the evening, from 6 to 10 p.m. at Eagle Castle Winery, where you can continue to celebrate Independence Day in style. Nosh on fried chicken, potato salad, coleslaw, watermelon, apple pie, and beverages. Live, good old-fashioned rock’n’roll and blues will be provide by The Cliffnotes, a six-piece act fronted by Cliff Stepp. The cost is $25 for Cellar Club members or $30 for non-members. Call the Tasting Room for reservations at 227-1428.

The San Luis Obispo Downtown Association and the City of San Luis Obispo host a special concert in Mission Plaza from 6:15 to 8:30 p.m. this Thursday, July 3, to celebrate the 25th anniversary of Farmers Market, an event designed to keep dangerous no-good-nics from cruising through downtown SLO. Prior to the Farmers Market, local high schoolers liked to pile in their parents’ station wagons and drive in endless loops around Higuera and Marsh Streets à la American Graffiti, so to put a stop to it, the city closed off Higuera and started the market. Now these flirtatious kids must engage in their shenanigans on foot! Perhaps some of them will walk over to the Mission to see the House Red Band, which plays vintage rock, soul, and blues classics. Lead vocalist Mary Welsh purportedly has a smoky richness in her voice that will remind listeners of Bonnie Raitt. In addition to the concert, there’ll be a cooking demonstration on Broad Street, nine barbecue locations, and more than 80 food and specialty booths.

Don’t forget that your friends at Downtown Brew and GALA are bringing SLO’s only drag show and pride dance to town this Thursday, July 3, from 9 p.m. to close. This is the first event of GALA’s Pride Week and begins with four fantastic female impersonators hailed as the Glamour Boyz. Presale tickets cost $20, available online at slopride.com.
The third concert of the Grover Beach Sizzlin’ Summer Concert Series runs from 3 to 6:30 p.m. on Sunday, July 6 when The Cinders Blues Band plays Ramona Garden Park (993 Ramona Ave.). The Cinders play straight-forward, slightly raw blues in an effort to create an unpretentious honest sound. Beer, wine, food, and Doc Burnstein’s ice cream will be sold with all profits returning to support the concert series. 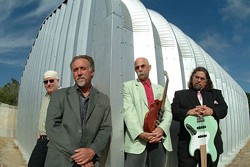 The West Coast Songwriters Contest continues at The Clubhouse at This Old House on Sunday, July 6 when Mark Lancaster headlines the 6:30 p.m. singer-songwriter event that will also include Redzuan, Jack Casey, Deborah Kirk, Joe Koenig, Larry Allen, Bill Vincent, Rob Hutchings, and Stephendipity. Lancaster was the Best Song Winner for the month of August 2007 for his song “Trust.”

CJ Boyd is a really cool experimental music artist who brings an electric bass and/or upright bass, loop pedal, and harmonica on stage to create quiet, emotive instrumental tunes. Waves of bass loops provide the base upon which Boyd layers harmonica drones via improvisational exploration. He performs at 8 p.m. on Wednesday, July 9, at Linnaea’s Café. There’s no cover and all ages are welcome.

Downtown Brew is gathering up four of your favorite local acts for a show next Thursday, July 10, when Cuesta Drive and Dogman Joe open for Criticnue and Still Time. The all-ages, 7 p.m. show costs $10 in advance (at Boo Boo’s and the venue).

A working name assembled from the surnames of its two-man team, Jackson Conti hurdles generations and genres as it swings like a summer cocktail—sweetly simple with intoxicating fun. Ivan “Mamao” Conti is a Brazilian percussionist extraordinaire, fueling the rhythms of Brazil’s most famous artists (Milton Nasimento, Gal Costa, Jorge Benjor). But it was his early ‘80s group, Azymuth, that filtered into the record crates of left-field producer Madlib (aka—Otis Jackson Jr.), who eventually crafted his own renditions of Azymuth’s classic songs. After an encouraged encounter between the two, Madlib left Brazil with an hour and a half of Conti’s solo rhythms. In a similar nature to his jazzy Yesterday’s New Quintet outfit, Madlib constructs an ode to jazz samba and bossa nova from Conti drumming. Flip flopping between seductively soothing jazz (“São Paulo Nights” and “Papaia”) to up-tempo festival shakers (“Nao Tem Nada Nao”), Sujinho is the sound of fluttering summer high life. Drink umbrella not included.

As the album cover suggests, Sigur Rós have discarded everything to run amok. And running wild means they’ve escaped the confines of their usual Icelandic recording studio for New York, London, and Havana, Cuba, and they've stepped away from the somber, transcendental epics of previous albums for songs that are direct and vibrant. “Gobbledigook” kick starts the album (translated as “With a Buzz in Our Ears We Play Endlessly”) with flailing tribal drums and its invented frivolous lyrics at happy play. “Inní Mér Syngur Vitleysingur” is Sigur Rós buoyant celebration, minus their typical four-minute build up. But for fans of their monumental bravado, look no further than nine-minute “Ára Bátur.” With voice and piano opening the track, it slowly builds to glacial heights with the help of the 90 members within London Sinfonietta and London Oratory Boys Choir. As arresting as it is inspiring, Sigur Rós continues to astound. Now if someone can only get them out of the offices more often.

Glen Starkey is supporting our troops by not joining the military, where his presence would surely destroy morale. Thanks him at gstarkey@newtimesslo.com.