Alt-rocker Pete Yorn was an immediate favorite of mine when he first released Musicforthemorningafter, his 2001 debut. I wasn’t alone in my appreciation of the New Jersey-born singer-songwriter; Rolling Stone called him one of “10 artists to watch” in 2001. He’s been on the West Coast for a long time now, and he tours a lot, so it’s sort of amazing that his Sunday, April 26, SLO Brew gig (7 p.m.; all ages; $25) is his first in our area. In fact, when I spoke to him on the phone, he admitted he’d never even been in SLO Town. 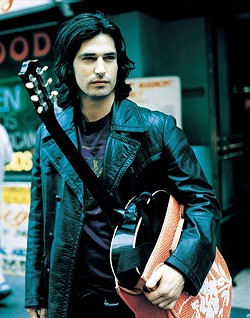 “Never even driven through,” said Yorn, whom I asked to tell me about his early years at LA’s Largo, where he met film producer Bradley Thomas (Kingpin, There’s Something About Mary), who tapped Yorn to score the film Me, Myself & Irene. He was signed to Columbia in 1999 based on the quality of his demos and scored a film in 2000 before he even released his first record!

“Largo happened when I first arrived in LA right after college in 1996,” Yorn said. “Largo was a really exclusive singer-songwriter haven, and a friend of mine, Adam Cohen, son of Leonard Cohen, knew the club owner [Mark] Flanagan and gave him my demo. He loved it and he gave me a night there. I really have to thank Adam Cohen for that and Flanagan for believing in me, because that’s where I met Bradley. This was a place where Aimee Mann and Elliott Smith played. It kind of taught me—prepared me—to do what I’m doing on this tour, the quiet thing, how to work a room. I’d bash it out, but some artists playing there, you could hear a pin drop, and watching people play and make their performances dynamic—it was an education. I also met some cool people, like Paul McCartney in the kitchen.”

For his first album, he played most of the instrumentation, and the record quickly reached gold status, based largely on the success of the breakout single “Life on a Chain.” Yorn followed up with Day I Forgot in 2003, which scored the radio hit “Come Back Home.” Then, in 2006, he released Nightcrawler, sort of the end to his morning, day, and night trilogy. It was on his extensive Nightcrawler tour where he developed his You & Me Acoustic series.

Before every evening’s full band show, Yorn would play a record store show, which was recorded, and people could immediately buy a copy of the set—34 such EPs were released in 2006.

“This tour is a lot like those You & Me Acoustic sessions, with just me and my acoustic guitar presenting it the way I want. I played with a full band doing big shows for 15 years, and I want to do a reset and scale back. I’ve never done a tour like this where I’ve really tried to simplify.”

OK, I had to ask Yorn about his 2009 album Break Up, which he recorded with Scarlett Johansson! The album went platinum in France, and why in France, and who gets most of the credit for its success, her fame or his talent?

“First of all, Scarlett is a really beautiful person inside and out, just one of the coolest people I’ve met, so the record has that going for it. I’m really proud of that record. I think it’s held up over the years, and the production feels really cool. It doesn’t feel niche at all, like it could have been made this year. The thing is, we knew going in we were never going to tour with it, so maybe if we’d been able to tour we might have got it out to a few more people.”

Yorn’s most recent endeavor is The Olms, a collaboration with JD King. Will he perform songs from that album in his concerts, or is he mostly playing songs from his solo albums?

“Everything—some old songs in the set for sure; everything is fair game. I’ll take requests, but yeah, I’ll do some new stuff. I’m working on a new solo record and putting the finishing touches on that. It will come out very soon. And JD and I are halfway through a new Olms record.”

I saved my most prickly question for last. Aside from the Scarlett collaboration, Yorn’s first album was his biggest seller but only climbed to 111 on the U.S. charts. His subsequent albums charted much higher but didn’t sell as well. What accounts for this? Was this the work of online music piracy?

“I don’t know. It’s funny, but I used to lament how I wish I’d gotten into the music business 10 years earlier. Right after my first record, that’s when the record biz started to collapse. But what are you going to do about it?”

The music plays on, and Yorn closed our conversation by saying, “I’m looking forward to the show.”

Pozo Saloon’s annual Pozo Stampede is huge this year, featuring nine acts over two days. On Saturday, April 25, the event kicks off with Callie Bobsin (2 to 3 p.m.), a Cholame resident who’s made a name for herself in country music circles. She’s followed by Maddie & Tae (3:30 to 4:30), a country duo featuring Madison Marlow and Taylor Dye, whose debut single “Girl in a Country Song” reached No. 1. Frankie Ballard (5 to 6 p.m.) brings his country singer-songwriter music next to stage. Songs like “Tell Me You Get Lonely,” “A Buncha Girls,” and “Helluva Life” put him on the map. Jerrod Niemann (6:30 to 7:45) is up next. His albums Judge Jerrod & the Hung Jury (2010), Free the Music (2012), and High Noon (2014) have produced six Top 40 Hot Country songs. The first day closes out with headliner Kip Moore. The former Abercrombie & Fitch store manager had the best selling debut by a male performer in 2012 and ’13 with Up All Night. 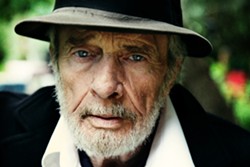 The show continues on Sunday, April 26, when Santa Margarita native Jade Jackson performs (1 to 2 p.m.). She’s currently working with Social Distortion’s Mike Ness, who’s producing her new EP. Parmalee (4 to 5 p.m.) follows Jade. The country band features brothers Matt and Scott Thomas, their cousin Barry Knox, and childhood friend Josh McSwain, and they’re signed to Broken Row Records and best known for the singles “Carolina” and “Close Your Eyes.” Eli Young Band (5:30 to 6:45 p.m.) is up next, with their hits such as “Crazy Girl,” “Even If It Breaks Your Heart,” and “Drunk Last Night.”

The really big news is, of course, Stampede headliner Merle Haggard (7:15 to 8:30 p.m.). The iconic country performer, along with Buck Owens, helped create what’s become known as the Bakersfield sound. He’s also known as part of the outlaw country music. Now 78 years old, Haggard is one of country music’s elder statesmen. He’s had, by my count, 38 No. 1 hits, a few of which are “Mama Tried,” “Okie from Muskogee,” “Everybody’s Had the Blues,” and “I Think I’ll Just Stay Here and Drink.”

By all accounts, Tina Malia has an incomparably beautiful voice, which has been hailed as “captivating,” “mesmeric and soul-transporting,” “pure sunshine,” and “stunning.”

On Thursday, April 30, as part of her world tour and run-up to the release of her new album Bridge to Vallabha this summer, she’ll appear at SLO’s The Monday Club (8 p.m.; all ages; tickets at tinamalia.com), where she’ll present her “collection of world sacred songs performed in various languages including English, Sanskrit, and Hebrew,” according to her publicist.

“My sonic imagination is truly diverse and expresses itself through world, kirtan, and dream pop musical styles,” Malia said in press materials. “For me, regardless of genre or language, it all has the same intention: permeating the heart. Very simple. For two hours, no one at the show—whether Christian, Hindu, Muslim, Sikh, Jew, or Buddhist—has a label. We simply all are souls. The musicians playing with me have the ability to take the music anywhere we want to take it. So, I couldn’t be happier that musically everything will be fully accessible to anyone who wants or needs to experience the Beloved.”

On Saturday, April 25, at Mongo’s (9 p.m.; 21-and-older; $5), check out the Kenny Taylor Band when he performs for a live video shoot. The singer-songwriter finds inspiration in the music of Dave Matthews, Ben Gibbard, and John Lennon.

Hot on the heels of Neil Young’s surprise show (Sorry if you missed it! I didn’t hear anything about it until 90 minutes before the show!) and Jeff Bridges at the Fremont, Good Medicine Presents has got another fun one for you, and this one’s free! On Sunday, April 26, Hot Buttered Rum headlines a show with opener Próxima Parada out on the lawn overlooking the Pacific at the Cliffs Resort (1 to 5 p.m.; all ages; free). Hot Buttered Rum is an amazing progressive bluegrass band with an incredible range, awesome stage presence, and killer show! Bring a lawn chair and enjoy!

Vina Robles Amphitheatre hosts Mexican-American singer Roberto Tapia on Sunday, April 26 (7 p.m.; all ages; visit vinaroblesamphitheatre.com). Born in San Diego, Tapia was raised in Culiacán, Sinaloa, Mexico, where he adopted the regional style of music. After five albums, he released his breakout hit album, El Muchacho, in 2012, which reached No. 1 on Billboard’s Top Latin Album chart. He’s also one of three coaches on La Voz Kids, a Spanish-language version of The Voice for children airing on Telemundo.

I’ve been reading surf and psychedelic rock icon Merrell Fankhauser’s biography, Calling From a Star, and it’s pretty incredible, digging into Merrell’s early years, music career, and all the notables he’s rubbed shoulders and shared stages with. It’s also got tons of cool photos, and you can buy it on amazon.com.

After my wife and I reviewed the film The Wrecking Crew, about a famed group of L.A. session musicians, Merrell emailed me about his own experiences with them: “Carol Kaye played on my 1968 version of ‘Everybody’s Talkin’’ and ‘Tampa Run.’ Jim Gordon of Derek and the Dominoes was on drums, Larry Knechtel of Bread on piano, and Al Casey, who played guitar with Duane Eddy, and I were on guitars. I did several other sessions with Carol in 1968 with other artists, and some songs that ended up on my HMS Bounty album! I also did a couple sessions with Tommy Tedesco. Most of this is in my autobiography! Your review made me a little nostalgic!”

Thanks, Merrell! He’s also devoted this month’s Tiki Lounge TV show to recently departed local entertainment icon Rick Martel. It airs through April on Charter channel 19 at 11:30 a.m. seven days a week and on Charter channel 2 Tuesdays at noon, Fridays at midnight, and Sundays at 7:30 p.m. It features Merrell, Rick, and Paul Lassonde singing “The Highwayman.”