Are you on www.MySpace.com, the Internet's social networking site that began as a grassroots thing only to be sold off to big media ($580 million to Rupert Murdoch's Newscorp/Fox News)? Well, a new green, grassroots company wants to lure you away and onto MyCounterSpace.com. To get the ball rolling, the Grover Beach company is having a concert at Mongo's on Saturday, April 7, at 9 p.m.

I'm not especially familiar with Savage Republic, which grew out of the '80s Los Angeles post-punk scene, but according to the Allmusic Guide, "Savage Republic grafted tribal percussion, industrial drones, and raga-like guitar lines together to craft an idiosyncratically moody sound with flashes of both desolation and eloquent grandeur." The group apparently uses oil cans, metal pipes, and 55-gallon drums as percussion instruments, lending an industrial edge to their sound.

In addition to the Mongo's show, there's a free in-store show at SLO's Boo Boo Records at 6 p.m. the same day.

MyCounterSpace, Inc. President Cathryn Sells and Pace's idea is simple: "Take an independently owned and operated networking site that generates its money through socially responsible and green advertising. Brandish the name and concept through trade shows like Bioneers and GreenFestivals that take place in San Francisco, Chicago, and D.C. to get the name out and established."

Voice On Tape and MYELLO from Olympia, Wash. will open the Mongo's show. Catch the next wave of social networking. Hiya! Take that, big media! 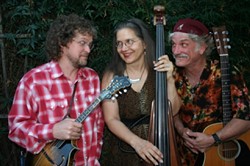 # Northwestern gloom, and frankly, his web site does a better job than I can describing this alternafolky's music: "After three albums recorded piecemeal on four-tracks and computers in three states and on two continents, David finally sat still in an old farmhouse and spent two years recording his fourth record. The result is the new album, Sharp Teeth, a potent discovery of moral ambiguity and unavoidable human disconnect that suggests some sort of modern American folk music in the Southern tradition deathly slow like life in the South, haunted by religion but unable to find answers in its Bible."

Malik Thorne reviews Daniels' new album at the end off this column.

Arbouretum mixes focused guitar plucking and sluggishly plodding rhythms with searching lyrics that look but never find. On Rites of Uncovering, Arbouretum's Thrill Jockey debut, frontman Dave Heumann describes the music as "a sense of religiosity that is not tied down to a particular moral or ecclesiastical approach, but rather proto-religious feelings such as awe in the face of something greater."

Like Daniels, this is quiet, contemplative. You may come out of this concert a bit more somber but none the worse for wear.

Birth of a band or hunger is the mother of necessity
"When all ya do is be a musician, ya gotta wear a lot of hats if ya wanna eat," said Billy Foppiano, he of many bands, including the Croon Dogs. Now the ripping guitarist has formed yet another group: Dustbowl Aristocracy.

# "This little group was born at the Atascadero State Hospital, where we were doing a rehearsal-less concert for the Sexually Violent Predators," he continued. "I'm bent over snaking cords out on the floor, and some of our 'audience' start streaming in. 'Oh good, it's you again!' some of them opine. I hope they haven't been thinking about me too much! Anywho, we had such a good time, we got together for some rehearsals, and worked up a list of weird, dingbat tunes, some original, some under the radar, some over the top! So we're going to have an actual concert, and we hope to have CDs of the event available later." 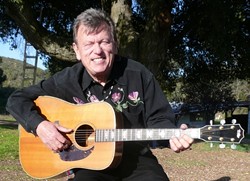 # that made its name by podcasting and being nominated for the San Diego Music Awards as "Best Pop Band of 2006." The trio will roll into Frog and Peach on Thursday, April 5, to support its new album Birthday Suit. Learn more about the band at www.myspace.com/bill.

"Travis style picker" Don Lampson will perform his original music along with the songs of other popular guitar players at The Porch in Santa Margarita from 7:30 to 9:30 p.m. on Friday, April 6. Call 438-3376 for more info.

An "Evening in Paris" is the title of the next Main Street Big Band dance concert on Friday, April 6, at 6:30 p.m. in the ballroom at Centennial Park, located at 600 Nickerson Dr. in Paso Robles. Ages 18 and older are welcome. Free refreshments will be served, as always. Tickets are available at the door for $7 ($6 for Paso Robles Senior Center members $5 for Cal Poly and Cuesta College students). For more info, call 237-3988.

Mr. Rick's in Avila Beach hosts blues/surfabilly guitarist "Sleepy Guitar" Johnson and his outfit on Friday, April 6, at 9 p.m. The band recommends that you "put on your dancin' shoes."

A variety of ripping blues styles await on Friday, April 6, when the Jerome Washington Express makes a stop into the Old Cayucos Tavern at 9 p.m. and then another stop on Saturday, April 7, at 10:30 p.m. in the Frog and Peach. Fans of blues guitar, don't miss it.

# Numbskull Productions present Isis with openers Jesu and Zozobra at Downtown Brew on Saturday, April 7, at 7 p.m., for a 16-and-older show. Isis describes itself as "a monolithic, breathing, dense, incredibly spiritual musical experience that, while rooted in heavy metal and the punk/hardcore aesthetic, relies just as heavily on ambience, atmosphere, and tone as it does complexity, aggressiveness, and raw emotion." Advance tickets are $15.50 at Boo Boo's and ticketweb.com.

Hard rocking Axia releases its new album on Saturday, April 7, at Hoover's Live. If you like your rock'n'roll anthem-like and stadium-ready, Axia is your band a throwback to '70s powerhouses. See them at 8 p.m. for $5. Hear some tunes and get the band's upcoming concert schedule (they've got a flurry of shows over the next couple of months) on www.myspace.com/theaxia.

The Red Barn Community Music Series has more acoustic music lined up for you when Inner Faces plays on Saturday, April 7, at the Red Barn in the South Bay Community Park. The trio mixes jazz, rock, classical, and bluegrass sounds into their own brand of string music. Formed on the Central CoastÜin 1990, they've played the Live Oak Music Festival, San Luis Obispo Mozart Festival, National Public Radio, and numerous coffee house venues. The concert's at 7 p.m., but as always there's an old time jam and potluck supper beginning at 6. A $10 donation is requested at the door.

Temple Beth David presents a celebration of Jewish music on Sunday, April 8, 2 p.m. ($20 call 541-0760 for info). Stanley Stern and the Beth David Klezmer Band will be joined by singers, dancers, and storytellers to offer an afternoon of Klezmer tunes, Ladino melodies, Yiddish theater songs, and more.

Hop on board on Wednesday, April 11, when Long Beach Shortbus, a band comprised of members of Sublime and The Long Beach Dub Allstars, pulls up to the curb at Downtown Brew for an 8 p.m. show opened by Starving Millionaires and Bayonics. 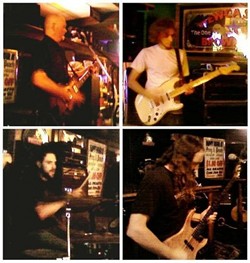 # Shortbus tours in support of Flying Ship of Fantasy, a new 18-track album in the Long Beach tradition of drugs, sex, and skank'n'roll. This is an 18-and-older show $16.50 in advance at Boo Boo's or www.ticketweb.com.

Kings Of Leon Because Of The Time Mamas, hide your daughters. These wayward sons of a preacher man return, opening their third full-length with a seven-minute slow-boiling thumper titled "Knocked Up" before outfitting their album with 12 more nuggets of muscular greasy rock. From the Southern roots of their Kentucky upbringing, The Kings Of Leon could easily shadow-puppet the long-hair gospel of the Allman Brothers a sound that filled much of their ear-catching debut. On Because Of The Time, however, there's an expansive growth in the sheer size of the sound and influences. "Charmer" catches Caleb Followill's grave drawl inflect into biting yelps a la the Pixies' Black Francis, while "My Party" adds punching drum rolls and angular attacking guitars to the post-punk leanings of Gang Of Four. Now armed with a stadium-filling loudness (thank touring partner U2), The Kings Of Leon indulge in it with a newly manned gusto. 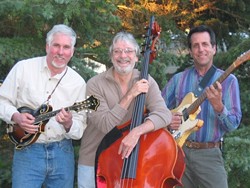 # David Karsten Daniels Sharp Teeth
While the gnashing teeth of the album cover may be off-putting, David Karsten Daniels' album broods only in lyricism: an uncertainty in human relationships and religious ambiguity, the daytime nightmares of a metaphysical mind maybe far too deep.

Either way, what he's captured on his Sharp Teeth is rich with majestic arrangements and instrumentation that suggests his study of composition and free improvisation. With a crooning emotive timbre, he digs into each song with a simple opening approach, until the color of orchestration transforms them into more fascinating structures. The bee-humming strings on "Minnows" build until a clamorous release, exhaling a chorus of voices, cymbal crashes, and upper-register guitar picking. "I saw Jesus and the Devil, they looked just the same," he quips, turning the phrase into a song of understandable religious questioning. From start to finish, this is a worthy album waiting for discovery.

# Cobra Skulls Draw Muhammad
It's a showdown of words on Cobra Skulls' terrific new EP Draw Muhammad and, despite the title, it's not America versus Radical Islam. Rather, it's the Skulls versus American policies that threaten the Constitution, exploit Third World peoples, and destroy cultures in the name of nation building with little ditties about romantic games and America's preoccupation with body image thrown in for good measure.

In "The Decider," lead singer Devin Peralta wails, "The president said it's up to me to die for my democracy/ and meanwhile he'll reserve the right to come into my home at night/ and say 'tell me what the fuck have you been reading'/ Well I can't relax, my phone is tapped, I can't get on the Internet/ without somebody watching over me// My freedom's changed, it's not the same/ we're all to blame, and my flag means nothing."

The rhythms are machinegun quick and the energy relentlessly intense, not unlike the most aggressive songs by NOFX and Bad Religion. If you're into politic punk, Cobra Skulls are the band to watch. Their incendiary lyrics are guaranteed to light a fire under your ass.

Glen Starkey's as easy at the TV Guide crossword. Drop your best pickup line on him at gstarkey@newtimesslo.com.