Always a Salieri, never a Mozart: Wine Country Theatre's 'Amadeus' shows another side of music history

History favors the winners and the conquerors, but it’s the messy stories of the defeated and the almost-but-not-quite geniuses that beckon, hauntingly echoing the tale of our own lives. 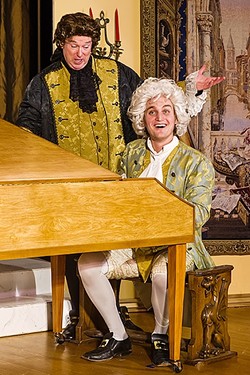 While Wolfgang Amadeus Mozart is a household name, his rival composer Antonio Salieri is not. But it’s Salieri’s story of jealousy and bitter resentment that gets a closer look in Wine Country Theatre’s production of Amadeus (showing through Dec. 4 at the Park Ballroom in Paso Robles).

“It’s a play worth doing,” said  Cynthia Anthony, Wine Country Theatre executive director and show producer. “We thought it would be an intriguing show.”

The play Amadeus by Peter Shaffer was also made into a movie in 1984 and brought the legendary composer into the cultural zeitgeist for many. The show opens and the fourth wall is immediately broken with Salieri’s venticellos (or little winds) who bring him news from court (like Game of Thrones’ Varys with his little birds), gossiping with the audience about how the former court composer for Austrian Emperor Joseph II is not well, how he is heard to scream “Mozart!” late into the night. The trend continues with Salieri (John Laird) talking with the audience like one might talk to a priest at confession about his guilt over Mozart’s (Ayrton Parham) death. The musical genius died of syphilis, but the venticellos whisper that rumor has it Salieri poisoned him when he realized the young man’s talent far eclipsed his own. 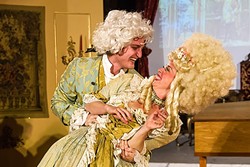 “There’s a big misconception that the show’s about Mozart, but it’s not,” Laird said. “Salieri is a devout Catholic and he makes a deal with God: ‘I’ll be good and then you’ll make me amazingly talented.’ He recognizes Mozart’s talent and it just pisses him off. So his actual battle is with God and he decided to get revenge on God through Mozart.”

A minimalist set with antique chairs, a chandelier, and projections onto the stage of grand theaters and ballrooms, along with period gowns and pompous wigs take us back to old Vienna in the late 1700s, when Salieri had a cush, carefree life as a revered composer at court until musical prodigy Mozart enters the scene. While everyone recognizes his talent, no one takes him that seriously, writing him off as a goofy kid who uses too many notes in his operas. But only Salieri can see just how great Mozart is, and it makes his own mediocrity painfully unbearable.

Parham plays the legend on the spectrum of everything from obliviously enchanted with music and life to dark and brooding at a world that can’t yet understand his greatness. He literally can’t seem to stand still. While Salieri is frustrated with a talent that he can see, but not attain, Mozart is haunted by his own demons, like constantly seeking approval from a father who made him play music blindfolded as a child and struggling to survive despite his talent.

“As the show goes on, his pain is more on display,” Parham said. “The audience’s idea of what he is will be different by the end of the show.”

To Mozart’s face Salieri acts like a friend; behind his back he wages a quiet war, blocking Mozart from advancing in the court at Vienna and even going so far as to scheme to sleep with his wife Constanze (Sabrina Pratt). The two stand in stark contrast, with Salieri always dressed in somber black and Mozart sporting garish hues of pink and blue.

While Salieri is supposed to be the villain in this play, he’s likeable, even relatable for the majority of it. For who hasn’t reached, grasping at greatness only to find it unattainable? The show’s antihero has these simultaneously chilling and comforting words to offer.

“As far as your mediocrity,” Salieri says to the audience, “I absolve you.”

Ryah Cooley is contemplating life while listening to Mozart’s requiem at rcooley@newtimesslo.com.