Always something there to remind me ...

The '80s are back this Saturday!

Looks like it’s time to bust out your parachute pants, leg warmers, neon, male eyeliner, and colorful cloth hair weaves, because Options Music Festival is back with another installment of That ‘80s Thing. This time around, you witness the New Wave goodness of Berlin with Terri Nunn, A Flock of Seagulls, Naked Eyes, and Dale Bozzio, the original singer for Missing Persons. 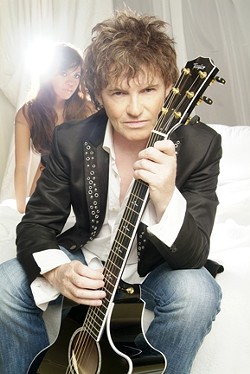 Like last year, the fundraiser for Options Family of Services—which helps adults with disabilities—takes place at the Alex Madonna Expo Center from 7 p.m. to midnight on Saturday, Oct. 27. General admission is $39, with reserve seating available for $59 from Vallitix at 1-888-825-5484 or at valllitix.com. Cabanas are also available by contacting Jacqueline Delaney at 588-8200 or jdelaney@optionsfs.org. You must be 21 or older to attend. Doors open at 4:30 p.m. with music by DJ La Violette.

Synth pop act Berlin formed in 1978 and earned its ’80s street cred with tunes like “The Metro,” “Sex (I’m A …),” “No More Words,” and from the film Top Gun, “Take My Breath Away.” A Flock of Seagulls was a Liverpool band that made its way to the States and hit it big with “I Ran (So Far Away),” “Space Age Love Song,” “Wishing (If I Had a Photograph of You),” and “The More You Live, the More You Love.” Naked Eyes, another British New Wave act, struck gold with their covers of the Burt Bacharach/Hal David standards “(There’s) Always Something There to Remind Me” and “Promises, Promises.” Missing Persons, formed in L.A. in 1980, was known for “Mental Hopscotch,” “Destination Unknown,” “Words,” “Walking in L.A.,” and “Windows.”

If this is anything like last year, it ought to be a blast. Attendees donned their finest ’80s gear and partied like they were in their 20s. Parking can be tight at the Expo Center, so carpool if you can!

So. Damn. Awesome. That’s the only way to describe Storm Large and her bawdy, theatrical, absurdly entertaining show, which mixes cabaret-style songs and hilarious and poignant stories of her own colorful biography into a must-see show. She returns on Monday, Oct. 29, to SLO Brew for an encore performance (7:30 p.m.; 21-and-older; $16 presale or $18 at the door). I think my favorite moment from her last show was when she sang “Hopelessly Devoted to You” from the Grease soundtrack, calling it the most romantic song ever, and asking us to imagine that she’s singing it to Danny (John Travolta) as he’s duct-taped head down to a toilet. Trust me, you don’t want to miss this one!

Before that, though, SLO Brew has a mess of other great shows cooked up this week, starting on Thursday, Oct. 25, with Goddamn Gallows (7:30 p.m.; 21-and-older; $8 presale or $10 at the door). Calling their music “twanged-out, punk rock gutterbilly,” they perform on washboard, accordion, mandolin, and banjo. The Dead Volts will open.

On Saturday, Oct. 27, local indie rockers PK hit the club. They gained notoriety with a couple EPs and a nod from Rolling Stone magazine, and in 2010 released the full length CD Into the Roaring. They continue to be a band with plenty of buzz, and I can’t figure out why they haven’t transitioned from clubs to arenas. From Indian Lakes opens the show.

Reggae act Collie Buddz returns to the club on Sunday, Oct. 28 (7 p.m.; all ages; $25). Hailing from Bermuda, Buddz incorporates hip-hop and soca into his infectious, danceable sound. The Holdup, New Kingston, and Los Rakas open what should be a really big show!

Get your shriveled black heart ripped out of your chest by Altercation on Tuesday, Oct. 30 (8 p.m.; all ages; $8 presale or $10 at the door), with opening acts Wintersfear and Depths of Chaos. This HELLoween Bash is going to be a headbangers’ delight.

Wolfgang Gartner is Grammy-nominated; had eight No. 1 tracks on Beatport; did remixes and collaborations with Britney Spears, Timbaland, and Black Eyed Peas; and debuted at No. 70 on DJ Mag’s prominent annual “Top 100 DJs” list, the world’s leading DJ poll and a who’s who collection of today’s biggest names in the electronic/dance genre that attracts more than 350,000 votes, with more than 10 million people viewing the results yearly.

So it’s hard to believe he was born Joey Youngman, lived in Los Osos, and attended Morro Bay High School! I mean, come on! He’s become one of the biggest names in electronic dance music! How did he do it?

“One of my mantras is that I have a responsibility to advance the genre,” he said in press materials. “If I’m capable of doing something I’ve never done before, I feel like I have to use that ability, because there are not many people who do—or can. I have to push myself real, real hard to do it.”

Now touring in support of his Casual Encounters of the 3rd Kind EP, he’s bringing his Love & War Tour to The Graduate on Tuesday, Oct. 30, and Wednesday, Oct. 31, for a special homecoming double header (Tickets are $30 on wantickets.com). The EP contains his house jam “Girl on Girl” and its heavier counterpart “Girl on Boy,” the latter of which currently sits at No. 16 on the Beatport Top 100 chart. He also just released Back Story, a retrospective catalog release featuring some of his biggest tracks to date, including “Wolfgang’s 5th Symphony,” “Montezuma,” “Undertaker,” and more.

“This is a collection of some of my older works, and a story of how I got to where I am today musically,” he said. “Everything here was produced between 2008 and 2010 and released independently on my label Kindergarten, and represents a creative coming-of-age. I still play many of these tracks in my sets as they've stood the test of time and still move audiences today.

Miss Shevaughn & Yuma Wray are touring through the area in support of their new album We’re From Here, appearing at 8 p.m. on Thursday, Oct. 25, at the Frog and Peach. Also known as Erin Frisby and Chris Stelloh, the duo is perpetually on the road, which sort of explains their new album title. Without fail at every show, someone would ask, “So, where are you from?,” which would always lead to a bit of stammering, “Well, Miss Shevaughn was born in Arkansas and grew up in Louisiana, Yuma grew up internationally. We met in D.C. then again in Chicago … .” We’re From Here is their simple answer to that complicated question—an album about the classic American road trip story, “unfolding both the personal and family histories as well as the musical influences informing both songwriters.” Haunting and beautiful, this is a lovely album from two talented performers.

Reggae act Project: Out of Bounds plays the Frog and Peach on Friday, Oct. 26, at 10 p.m., bringing their progressive reggae-fusion to town. “In a musical age where success is manifested through kissing ass and blasting social media sites, P.O.B. is the band that lets their art speak for itself,” says their bio. “Their music is creative, edgy, and hip. They usually sneak under the radar right before sucker punching the crowd with an explosion of energy. They have accumulated a fan-base of true music aficionados that don’t buy into hype. Yes, this is a band for the true music fan, not just the reggae fan.”

For the last few years, surfer dude, yoga master, and all around cool cat Christopher Hawley has been touring through the area, but the L.A. rocker always seems to play solo up here. Well, on Friday, Oct. 26, that changes when he brings his band the Christopher Hawley Rollers to Sweet Springs Saloon at 9:30 p.m. “It's a rare, full-band SLO-area show, and it will feature a combination of L.A. and SLO Rollers,” Hawley said. “Anthony Roselli is joining us, and he and I have been collaborating live on my tunes, mostly in the SLO area, for almost 10 years, and he's a great singer songwriter in his own right. This run up the coast precedes the release of the fifth album by the Christopher Hawley Rollers, and we'll have a few copies left of Meditations, the current album, which features Bill Payne from Little Feat on keys and John Steward from Fishbone on drums.”

Chris Proctor plays the Coalesce Bookstore on Friday, Oct. 26, at 7 p.m. ($20; 772-2880) and Castoro Cellars on Saturday, Oct. 27, at 7:30 p.m. ($20; 238-0725) with Brooks Robertson. Proctor is a “U.S. National Fingerstyle Champion” and acclaimed composer of original music on the steel-string guitar. Robertson utilizes his superb technical abilities to play bass, rhythm, and melody simultaneously. If you’re a fan of guitar music, these are two guys you won’t want to miss.

Jake Shimabukuro has taken ukulele music to places no one ever thought it could go, drawing comparisons to the likes of Jimi Hendrix and Miles Davis. On Saturday, Oct. 27, at 7 p.m., Shimabukuro returns to the area for a performance in the Performing Arts Center’s Cohan Center. PAC Outreach Services and Cinema Paradisio are presenting this show as a dual fundraiser for the Performing Arts Center’s Outreach program and Guitars in the Classroom. As for Shimabukuro, his most recent album Peace Love Ukulele debuted at No. 1 on the Billboard World Album Chart. On it, Shimabukuro effortlessly mixes jazz, rock, classical, traditional Hawaiian music, and folk music that is guaranteed to blow your mind. As Pearl Jam’s Eddie Vedder, who’s no stranger to the ukulele himself, said, “Jake is taking the instrument to a place that I can't see anybody else catching up with him.” Student and adult tickets for the performance range from $20 to $55 (756-4849).

The Matt Slocum Trio returns for a special concert on Saturday, Oct. 27, at Cuesta College with special guests Aaron Wolf and Inga Swearingen at 8 p.m. in the CPAC Experimental Theater at Cuesta College. Slocum is considered one of the most highly regarded drummers and composers working today, and his trio includes pianist Vardan Ovsepian and bassist Darek Oles. Add in saxophonist Wolf and vocalist Swearingen, and you’ve got a show jazz fans shouldn’t miss! Tickets cost $15 for general admission and $10 for students, seniors, and SLO Jazz Federation members.

The great swamp blues guitarist and harmonica player Kenny Neal headlines the next SLO Blues Society show on Saturday, Oct. 27, at 8 p.m. in the SLO Vets Hall. This naturally gifted musician can pretty much make any instrument he picks up sound good, and he travels with a band comprised of mostly family members. His music “celebrates both the joys and acknowledges the losses of life. It’s a very personal soundtrack that everyone can identify with; musically, a laid-back Cajun rhythm, augmented by funk, zydeco bounce, and soul, Acadiana style,” according to his press materials. Burning James and the Funky Flames open the show. Tickets are $17 for Blues Society members and $20 for the general public, available at the door. You must be 21 or older to attend, and free dance lessons are offered at 7:30 p.m. This is the weekend before Halloween, so feel free to wear a costume!

Award-winning singer-songwriter Dulcie Taylor will headline Sculpterra Winery as part of Steve Key's Songwriters at Play showcase series on Sunday, Oct. 28, at 1 p.m. Joined by George Nauful on guitar and vocals, Taylor will present music from her three Mesa/Bluemoon Records releases, including her newest, Free of This Sorrow, which reached No. 1 at Amazon for Top-Rated Americana. Go online to songwritersatplay.com for the complete line-up of acts this week.