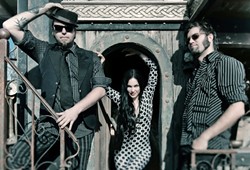 In “Revival,” Beats Antique begins with what could be described as gothic cartoon music, with weird xylophone sounds and a creepy melody, but then it’s suddenly interrupted by a ringing phone, then a creepy voice saying in French “The dance is dead,” and then it’s onto a pumping electronic beat and various sounds that Danny Elfman might use. In other words, good luck predicting where Beats Antique will go next. The relentlessly creative trio’s live show mixes samples, percussion, tribal fusion dance, and performance art, which have made them a favorite on the electronic dance festival circuit (Coachella, Lollapalooza, Bonnaroo, and Red Rocks). Think Bollywood meets a Drum ’n‘ Bass show at an underground circus.

David Satori is a California Institute of the Arts graduate who formed the experimental instrumental group The Funnies while in college. The Afro-beat band was notable for touring in a vegetable-oil-powered bus.

Zoe Jakes was a jazz and ballet dancer who turned to belly dance in 2000, and now mixes tango, popping, and Indian dance into her repertoire. She toured for several years with the Yard Dogs Road Show.

Tommy Cappel first met Zoe while both were members of Extra Action Marching Band, and Satori and Cappel first collaborated when Satori brought Cappel to drum at a Burning Man after party.

All three are artistes, dig me?

This is a highly entertaining live act, and it will be the perfect capper to a five-act extravaganza this Sunday, Aug. 31, at Vina Robles Amphitheatre, when Beats Antique, Matisyahu, Ozomatli, Makua Rothman, and Zongo All-Stars perform (doors at 4 p.m., show at 5; all ages; $45.95).

The opener, Zongo, is a local Cali-Cubano act with a tight new debut CD. They recently won Best Local Band in the New Times Best Of Readers’ Poll for the second year in a row.

Ozomatli should be familiar to local music fans. They’ve played several times at SLO Brew, and the L.A.-based septet mixes Latin and Chicano rock, hip-hop, funk, and world fusion. Their music often contains political activist themes, and, when they play it, always feels like a street party.

Matisyahu is a rap, reggae, and alt-rock artist who was born Matthew Paul Miller, but goes by his Hebrew name. He used to rock the Hasidic Jewish style with the long hair at the temples, and the beard, and the hat, but lately he looks more like a Matt Miller than a Matisyahu. Still, his upbeat sound is filled with joy.

This show was sort of a late add for Vina Robles, but it may be the sleeper hit show of the season! I hope they clear the flat area in front of the stage for dancing instead of filling it up with seats. People are going to want to move to this music!

Naturally the biggest and most important show at SLO Brew this week is the New Times Music Awards (Conflict of interest? Me?) on Thursday, Aug. 28, but you can read all about that in Art Bash!

Instead I’ll tell you about SLO Brew’s other important shows, like Night Riots, a local band I’d vote most likely to have mainstream rock success. After all, they’ve already been featured in Rolling Stone as one of the top unsigned bands. MTV called them one of the “most criminally overlooked artists of 2012.”

“We’ve been doing weekend warrior shows all over California and Arizona along with a KROQ residency at Hemingway’s Lounge in Hollywood every Tuesday in August,” Night Riots bassist Matt DePauw said. “Keeping very busy. We’ll be playing our final show of this tour at SLO Brew, and we’re very excited for another rad home show. Also, we’ve been working hard in the studio and will be releasing a new track in the next week or so followed by an EP in October.”

The Holdup, a DIY act that formed in 2008, quickly grew a fan base, recorded an EP, almost instantly sold a thousand copies, and attracted the attention of the independent record label, Dub Rock Records. With a bit of a boy-band vibe, The Holdup mixes hip-hop, reggae, dub, soul, pop, and rock. Vokab Kompany reminds me a little of the vibe put off by Fun Loving Criminals.

Groundation mixes roots reggae with elements of jazz, funk, salsa, soul, and transcendental dub. Their name “alludes to the decades-old communal Rastafarian ceremony of ‘Grounation,’ a ritual based on the meditative powers of music,” according to their bio. The group formed in 1998 in Sonoma State University’s jazz program.

And if you still haven’t had your fill of reggae, head back to SLO Brew on Wednesday and Thursday, Sept. 3 and 4, when Tribal Seeds plays both days (7 p.m.; all ages; $20 presale or $23 at the door) with New Kingston and The Expanders. Reggae icons such as Bob Marley, Steel Pulse, and Midnite have influenced Tribal Seeds. Brooklyn-based New Kingston features three brothers led by their father. The Expanders have been around since 2003,  and play vintage reggae in the style of The Ethiopians, The Gladiators, and The Mighty Diamonds.

Nine time’s the charm, right? The world famous (or at least regionally famous) Twang N Bang festival is back this Sunday, Aug. 31, at the Frog and Peach. Yep, this is Twang N Band IX, and it’s bigger and better than ever!

“This year’s Twang is massive,” organizer Patrick Hayes said. “We’re having two stages, one indoor and one on the patio. Eighteen acts are currently signed up to play, and I expect to add a few more before the show.”

“That lineup has everything from folk singers to newgrass to punk to twangy rock to straight-up country and just about every stop in between,” Hayes noted. “Music should start at 1:30 p.m. and it’ll go all day and night. Best part is that it is free.

“Though we’ve expanded a bit to add in friends from other towns, Twang N Bang remains mostly focused on getting a whole slew of local bands together with some common threads in their music to play one big ole show to showcase how strong and diverse our local scene is, even within the confines of a sub genre,” added Hayes.

Come support your local music scene, which is clearly vibrant, diverse, and awesome!

This Friday, Aug. 29, California roots rock collaborators, The JD Project, bring their infectious rock and singer-songwriter sounds to Concerts in the Plaza in front of the SLO Mission from 5:30 to 7:30 p.m. It’s free, it’s fun, and the community loves these concerts!

Reggae rockers the Street Urchinz play Frog and Peach this Friday, Aug. 29, at 10 p.m. You can also hear ska, punk, soul, and classic rock mixed into their bright and upbeat sound. This is a party band, baby!

Santa Margarita resident Paul Steven Silva lists The Band, the Eagles, and Cat Stevens as influences, and sure enough, the singer-songwriter has a soulful, breezy sound like his music heroes. This week he plays Linnaea’s Café on Friday, Aug. 29 (8 p.m.), as well as Luna Red on Sunday, Aug. 31 (3 to 5 p.m.). Check out his sounds at reverbnation.com/paulstevensilva.

This just in from Burning James & the Funky Flames: “Attention People of Earth! This is a BIG week for the Funky Flames. First of all, we will be celebrating our friend Terry Lawless (of U2) at four gigs this week. Terry is leaving us to get back on the world stage with his Irish friends, and this is your last chance to see the Funky Flames with Terry. And we have been burning it up!” See them Friday, Aug. 29, at 6 p.m. in the Avila Bay Athletic Club; Saturday, Aug. 30, at 3:30 p.m. at Brews & Bites in the SLO Mission Plaza; later that same night at 9 p.m. in Old Cayucos Tavern; and Sunday, Aug. 31, at 2 p.m. at Dusi Winery (though Lawless won’t be at this final gig, and it’s billed as Burning James & Friends).
Head to Linnaea’s Café this Saturday, Aug. 30, at 8 p.m. to hear the soulful father and son duo Young Ireland, who may be joined by Cuesta Ridge guitarist Patrick Pearson as well as the Bob Liepman of Shadowlands on cello and mandocello. Good stuff!
Michael-Ann returns for two dates this week: Saturday, Aug. 30, in A-Town’s Avion & Claw (7:30 p.m.) and Sunday, Aug. 31, at Paso’s The Pour House (5 p.m.). The L.A.-based singer-songwriter delivers emotionally wrought songs sung in a melancholy alto.

Paso’s Bianchi Winery begins its new Lakeside Concert Series this Sunday, Aug. 31 (and every other Sunday), from 1 to 4 p.m. with The Jammies playing classic rock, funk, reggae, and blues. “Wine will be available by the glass or bottle, and guests are welcome to bring low-back chairs and picnics to kick back, relax, and enjoy the afternoon,” said organizers. The rest of the line-up includes Diego Mondragon (Sept. 14), Acoustify (Sept. 28), The Dave Miller Band (Oct. 12), and The ComeUnity Band (Oct. 26). For more information or to reserve a V.I.P. table, please call 226-9922, Ext. 33.