Bert & Bertie (Dance Camp) direct this screenplay by Lucy Alibar (Beasts of the Southern Wild) based on her 2010 play Christmas and Jubilee Behold The Meteor Shower. Set in 1977 rural Georgia, the story focuses on klutzy, unpopular "bedwetter" Christmas Flint (an utterly charming Mckenna Grace), who's fascinated by outer space and desperately wants her voice recorded on NASA's Golden Record, which will be shot into space on Voyager, but to do so, she'll need to join the local Birdie Scout troop and win the regional jamboree talent show. When she's rejected by the local troop run by Miss Massey (Allison Janney), she recruits other misfits to form their own Troop Zero, with Christmas' dad's secretary, Miss Raylene (Viola Davis) as troop mother. (94 min.) 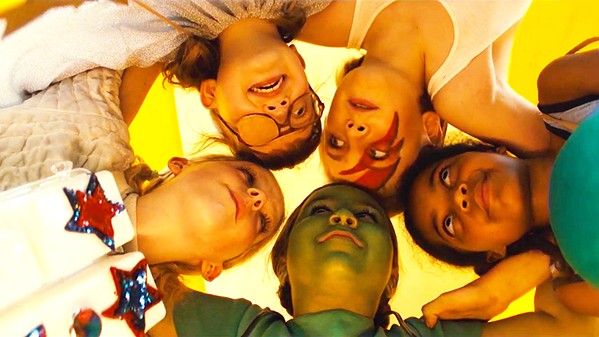 Glen If The Bad News Bears (1976) married Revenge of the Nerds (1984), Troop Zero would be their baby. It's a sweet-as-honey story about a group of misfits who didn't know they needed each other but who forge deep bonds of friendship. Christmas Flint is endlessly teased by her peers. Her only friend is Joseph (Charlie Shotwell), an effete boy whose sexuality is questioned. When Christmas begins to recruit members of her troop, her pickings are slim. One-eyed Jesus lover Anne-Claire (Bella Higginbotham) is game, but bullies Hell-No Price (Milan Ray) and Smash (Johanna Colón) take more convincing. Eventually the idea of stealing the thunder from the goody-goody Birdie troop filled with their school's snotty and self-important girls and led by Miss Massey is enough of a draw to bring the five kids together. But before they're allowed to attend the regional jamboree and have their shot at getting on the Golden Record, each troop member needs to earn a merit badge. Predictably, comedy ensues as the misfits struggle to find something to excel at. The film's a bit paint-by-numbers, but it's charming as can be.

Anna Christmas has had to come to terms with losing her mother, and a big part of her fascination with space and aliens is tied to her tentative hope that maybe her mom is up there somewhere looking down on her. Her dad, Ramsey Flint (Jim Gaffigan), is a small-town defense attorney who has a heart of gold and the nickname of Boss, whose generous ways have left the family dirt poor. He's a sort of overgrown kid himself, and Miss Raylene is a heavily hesitant participant in their lives. Raylene's ambitions got squashed by small-town America, and the begrudged responsibility she feels toward Ramsey and Christmas has her with one foot out the door. The rag-tag group of kids in Troop Zero is where the real charm lies—they aren't the popular kids or the well-to-dos. They are, in fact, the subject of ridicule by those perfectly plaited, uniformed young ladies. This film is so endearing. I laughed, I sobbed, and maybe it's just the timing of my viewing that made it so poignant, but it really is about the tribe that is around you and loving each other—warts and all. It's also about finding hope in the hopeless or hard moments in life. I loved this movie.

Glen It's very sweet, and you're right: These kid actors really sell it. Likewise, their various characters are well written and developed. Mean kid Hell-No is basically masking her own fear of rejection. Pudgy Smash thinks she'll only get attention from acting out. Zealous Jesus freak Anne-Claire is kind to the point of being a punching bag. Joseph is just trying to be accepted for what he is, whatever that turns out to be. Christmas, however, wins them all over with her earnestness, sweetness, and hopefulness. As great as Davis and Janney are as the competing troop mothers, they take a backseat to these adorable kids, for whom I was rooting to succeed. Best of all, the ending strikes just the right note of realism and justice. Loved it!

Anna I, too, loved the ending—what should be momentous and beautiful is ridiculed and abhorred by all the "normies" around them. Troop Zero has a real moment of either bowing down to the opinions of others or saying, "We're going to be ourselves whether you like us or not!" What a reminder of life on the playground when you are an "other." We all weren't molded to fit into the same box, and it's sweet to watch this group of kids learn that lesson. I've been recommending this film left and right since we watched it. It's the feel-good, "might make you cry but in a good way" sort of movie that gave a much-needed break from the uncertainty of life as we know it right now. I have no doubt that this is one I will watch again and again. Make the time for this one, it's so worth it! Δ