Creators Raphael Bob-Waksberg and Kate Purdy helm this animated fantasy-drama about Alma Winograd-Diaz (Rosa Salazar), a troubled young woman who, after a near-fatal car accident, discovers she has a new relationship with time and space. Soon her dead father, Jacob Winograd (Bob Odenkirk), begins appearing to her and telling her she's a shaman whose special abilities can find out his murderer. Is she insane? It's animated using the rotoscoping technique. (Eight 23 min. episodes) 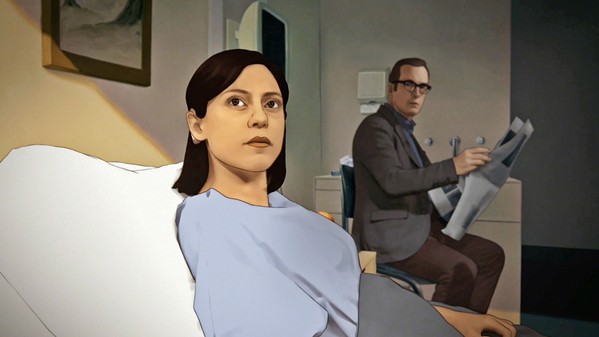 Glen Alma doesn't play well with others. She and her younger sister, Becca (Angelique Cabral), love each other, but they're very different. Becca is about to marry Reed (Kevin Bigley), the frat-boy-esque scion of the wealthy Hollingsworth clan, and Alma knows she'll never love her boyfriend, Sam (Siddharth Dhananjay), enough to want to settle down. Alma's mother, Camila (Constance Marie), definitely doesn't understand her daughter, and we learn that mental illness ran in Alma's deceased father Jacob's family. Aside from getting tequila-drunk, Alma doesn't have much ambition, and the only thing she's good at is her job in a preschool, but after a car accident leaves her questioning reality, even that job becomes too much for her. This first season is basically Alma navigating her existential crisis as she tries to discover who she is and why she's here. It's very funny and engaging! Another season has been greenlit, and I'll definitely watch.

Anna Stylistically I am a big fan of the rotoscoping technique—it is such a smart way of muddying the waters between fantasy and reality and taking the audience on a journey. Not only are the characters and storyline of Undone fascinating, but it's just such a treat visually. Alma is both frustrating and magnetic—her quick wit and frankly hilarious antics contrast with the dull repetition she feels her life has slumped to and her bleak outlook in general. We learn pretty quickly that Alma's childhood was molded by several big events, including her father's death—times she can't help but travel back to in her mind and certainly still feel unresolved. Her mother and sister love her, though many times they can't stand her. She's a loose cannon near the shores of their glassy lake; who knows when she'll blow it all up again. I'm all in on this series! Bring on season two!

Glen The rotoscoping technique allows for an easy transition between reality and fantasy. Sometimes I thought, "What's the point?" Then something dramatic would happen like Alma's car accident, a reversion into her past, or a trip into outer space, and I would realize the animation was essential to the story. This is a tale of relationships, personal growth, and metaphysics. Alma's father's research was based on what he believed was the malleable nature of time and space. When he returns to teach Alma to master, for instance, telekinesis, it's not through actually moving something with her mind but by using her newly discovered control over space and time. And her powers aren't even new; she just never manifested them until her father showed her they were there. It's pretty heady stuff, and the end of season one calls into question everything Alma thinks is true. Season two is teed up nicely. I can't find a release date for it, but it's definitely happening!

Anna Alma's relationship with her father, both before and after his death, is complicated. She's the older sibling, so she has more memory and connection to him than sister Becca. She's no stranger to abandonment issues and seems to have almost a sense of pride over her unattached life. The walls she's built up in self-protection can't help but crumble as her reality falls further and further away. It's so easy to think of both our lifetimes and time in general as a linear story; Undone has a lot of fun messing with that narrative and throwing us for loop after loop. Watching Alma's story unfold in a series of flashbacks and fast-forwards means that even at the end of season one we are still learning about our main character. We binged this, which is a great way to watch, but I wouldn't mind going back in time myself and slowing down my watch: There is a lot to enjoy here. Δ