Amber Cross plays Southern Station on Aug. 25, in support of her new CD 'Savage on the Downhill'

Savage on the Downhill, the newest album by local Americana singer-songwriter Amber Cross, finds her in more of a country and Western vein than previous folk and gospel efforts. Cross's voice can sound plaintive, mountain-fresh, and straight out of Appalachia, and here the Maine-born-and-raised pastor's daughter moves through a variety of roots genres that share one thing in common—exquisitely crafted and crisply picturesque lyrics.

"Echoes" conjures up simple country home life with a married couple caring for her parents and raising their kids, but it asks, what happens when the grandparents are gone and the kids are grown?

"Mamma's coming down the hall in her slippers/ and she's looking for a cup of tea she swears she made/ Dad's been up and out since four this morning/ He tried to lay back down but the quiet woke him up again/ The kids we raised became our pride and joy, love/ For 18 years our lives were not our own/ Tell me again just why are we still together?/ Lying next to you I never felt so alone// At the foot of the stairs we hear the echoes/ of the children that we raised up, gone, and grown/ Out of the stillness comes a question begs an answer/ With just you and I will this house still be a home?"

In her liner notes, Cross explained her new album's genesis: "During the dry winter of 2015, I drove to Elko, Nevada, for the National Cowboy Poetry Gathering. I was curious if my songs might find a home in the Western music scene. One afternoon, I heard Chuck Hawthorne perform and was so moved by his singing and words that I introduced myself and we exchanged CDs."

Hawthorne put Cross in touch with his producer, Ray Bonneville, a Canadian blues and roots musician and producer, who agreed to work with Cross. The two met to record in Austin, Texas, enlisting songwriters Gurf Morlix and Tim O'Brien, among others.

O'Brien, a well-known country and bluegrass musician, praised Cross' "no bullshit style of singing," and indeed Cross's voice is a rare thing. Likewise, her songs are narrative slices of country life that come from years of being an outdoor gal.

On the album's title song, she paints a picture of a tracker moving through the brush, being careful not to bury the barrel of her Savage rifle as she slides down a steep ravine.

"I can feel you out there, moving through dark/ Feeding on my fear like the scavenger you are/ Did you think I'd stay here in your nightmare dream/ This is the last time that you will ever bother me// With my Savage on the downhill so as not to break my fall/ I move along the cattle trail across the canyon wall/ I may hawkeye on a sparrow, I'm onto your game/ I know which way the wind will blow before it begins to change."

The song also works as a metaphor about a wise woman who refuses to fall for a predatory suitor. Such is the depth of Cross' lyrics.

She's working on setting up a fall tour, but as a new mother with a young toddler, she hasn't been able to promote the record as she normally might. She is, however, playing at Southern Station in Santa Margarita this Friday, Aug. 25 (6 to 8 p.m.; all ages; free). There are some good eats to be had up there—chicken and waffles! Woo hoo!—and bring some extra dough to pick up a copy of Savage on the Downhill. It's a keeper.

Phat horns at the beach Early this month, Trombone Shorty and Orleans Avenue played The Late Show with Steven Colbert, and it was off the hook! His new single, "Here Come the Girls," has been getting a lot of radio traction—a hard charging, horn-driven second-line-style anthem from a New Orleans band that keeps getting better and better.

This Friday, Aug. 25, you'll get two truly amazing horn-driven acts playing an Otter Productions Inc. show at the Avila Beach Golf Resort when Trombone Shorty and St. Paul and the Broken Bones perform (gates at 5 p.m., show at 6; all ages; $35 general admission or $65 to $95 for advanced reserve seating available at all Vallitix locations including Boo Boo Records, vallitix.com, or by calling (888) 825-5484). This promises to be a really amazing show.

Numbskull and Good Medicine Presents have really been working overtime this summer to deliver great shows, and they have a series of four coming up this week that's pretty incredible.

It starts this Friday, Aug. 25, at Morro Bay's The Siren, with Fan Halen (8 p.m.; 21-and-older; $15 presale at ticketfly.com or $18 at the door), known as "The World's Most Authentic Tribute to Van Halen." Apparently, Ernie Berru is basically David Lee Roth's doppelganger! Derek Fuller as Edward Van Halen perfectly covers Eddie's every riff. It'll be like a trip back to 1984!

Next up on the hit parade is Reverend Tall Tree at Presqu'ile Winery on Saturday, Aug. 26, with Proxima Parada opening (doors at 5 p.m.; all ages; $20 at ticketfly.com). Reverend Tall Tree shouts, moans, stomps, shuffles, and hollers their way through their blues, soul, and American roots music. Expect "powerful mid-century blues and soul performers of the golden era of blues and soul," according to their press materials.

So good so far, but hold onto your hats because Good Medicine and company are just getting started. On Sunday, Aug. 27, the amazing Chicano folk-rock act Los Lobos plays a Boys & Girls Club of North SLO County benefit concert at Tooth & Nail Winery (5:30 p.m.; all ages; $42 presale at ticketfly.com or $45 at the door), with the mesmerizing one-man band The Suitcase Junket opening the show.

Los Lobos is one of the most storied bands to ever emerge from the fertile LA music scene. Ostensibly a rock act, they were also inspired by the sounds they heard around them—Tex-Mex, zydeco, country, R&B, soul, and traditional music such as cumbia, boleros, and norteños. Their first mainstream album How Will the Wolf Survive? is still a classic and led to them recording the soundtrack for the Ritchie Valens biopic soundtrack for La Bamba.

My favorite of their many excellent albums may still be Kiko (1992), but they honestly don't make mediocre records. Everything they've done is a gem in its own way, including their most recent, Gates of Gold (2015). 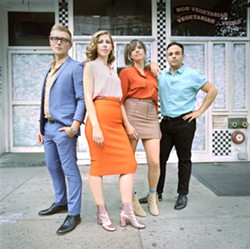 And the week's coup de grace, at least in my opinion, is Lake Street Dive at Tooth & Nail Winery on Tuesday, Aug. 29 (6 p.m.; all ages; $30 presale or $35 at the door). The last time they played the area was a show at the SLO Performing Arts Center, so seeing this band in the intimate outdoor space of Tooth & Nail is going to be incredible.

Formed in 2004 in Boston from musicians who met at the New England Conservatory of Music, this genre-jumping quartet really hit its stride in 2010 with the release of their eponymous third album. They started getting national attention when in 2012 they made a commitment to touring. They write amazing, hook-laden songs that sound like The Beatles wandered into Motown and delivered amazing '60s soul and rock chart toppers. This band's music is irresistible. 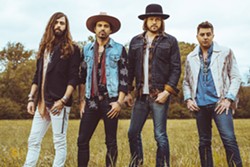 Vina Robles Amphitheatre kicks off its weekend with local radio station KJUG FM 98.1's Back to School Bash featuring Eli Young Band, Drake White and The Big Fire, and A Thousand Horses this Saturday, Aug. 26 (7 p.m.; all ages; $35 to $59.50 at vinaroblesamphitheatre.com). This country music extravaganza will feature plenty of radio-friendly hits!

On Sunday, Aug. 27, hear the voice of Elsa from Disney's Frozen when Tony Award-winning singer Idina Menzel performs at Vina Robles (8 p.m.; all ages; $53 to $105). She's been called "the Streisand of her generation" but is well known for playing Elphaba (aka the Wicked Witch of the West) in the hit Broadway Musical Wicked and for singing Frozen's Oscar-winning song "Let It Go."

A half a century ago, local poet Francesca Nemko was a singer, and now she is again. "I'm now singing as well as poetizing," she said. "I started a couple of years ago, after a long break of about 50 years, and have been testing the waters in different contexts." This Sunday, Aug. 27, she'll perform at Unity Concert Hall (2 p.m.; all ages; $10 suggested donation). "I'm working with guitarist/vocalist Mike Swan and between us we cover a variety of songs from the Great American Songbook, such as those made famous by my personal idols, such as Nat King Cole ('Nature Boy'), Frank Sinatra ('You Make Me Feel So Young'), Tony Bennett ('The Best Is Yet To Come'), plus some originals by Mike." Sounds like fun! 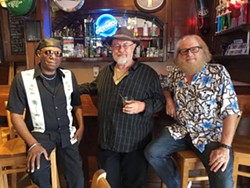 Gary Steinmann, former member of classic local acts such as Al Millan and the Robots, Rancho Deluxe, and The Richard Green Band, has been a part of the Blues Masters Jam Session since 2009, and this Wednesday, Aug. 30, he'll be at Mongo's Saloon in Grover Beach for the eighth anniversary Blues Masters Blowout, "hosted by the original trio that started the whole thing: Craig Louis Dingman, Rick Pittman, and me," Steinmann said. Over the years and in its various locations, the jam has attracted players such as James Scoolis, Daryl VanDruff, and others. Come celebrate this long-running music treasure! "Lots of past and current participating musicians will be on hand to raise the roof and kick out the, well, jams," Steinmann added. Δ