America in the raw 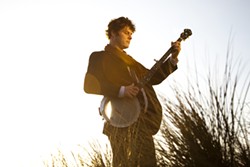 What does an avant garde saxophonist and composer do when he decides to honor the American folk tradition? He creates a banjo-driven album, of course, one that leads off with a cover of Aretha Franklin’s Ronnie Shannon-penned tune “You Ain’t Never Been Loved (The Way That I Love You).”

If this all sounds impossibly odd, you simply don’t know Mark Growden, who’s made a career of odd, first scoring instrumental pieces for dance and theater companies before creating place-based albums like his last, Saint Judas, which explored love and redemption amid the Oakland milieu.

Lose Me in the Sand returns Growden to his boyhood home: “I grew up in an old logging town, less than a hundred people, on the Sierra Nevada/Cascade Divide.” On it, he covers, or as his bio notes “uncovers,” icons’ songs such as Bruce Springsteen’s “I’m On Fire,” which he slows down, tweaking the lyrics as he changes “Can he do to you the things that I do” into “Does he do to you the things I don’t do.”

He’s at his most beguiling on a track like “Killing Time,” one of his own songs, that’s clearly drawn from his own childhood: The mill’s been closed down fifty odd years now/ We made wooden crates in a time of cardboard/ There ain’t that much left but a big slab of concrete/ A millpond and a jailhouse with an old iron door/ And the pines just sigh while the clock testifies/ You can’t kill with a shotgun/ But you can try/ Now days if you’re lucky, you can work at the prison/ If you know the right men and you live by the law/ They say after five years, it don’t even matter/ Which side of the bars you’re standin’ on/ And the pines just sigh while the seasons creep by.

“When I sing this song at home, people cry,” says Growden.

And so it goes. Growden mixes insightfully arranged traditionals, select “uncovers,” and his own sparkling compositions into an album centered on an early America revealing itself and simultaneously dying. Gorgeous and tragic, it’s a collection that’s difficult to turn away from. See for yourself when Mark Growden plays The Steynberg Gallery on Tuesday, Feb. 22, as part of Steve Key’s Songwriters at Play showcase (6:30 pm.; all ages; $5).

“My vision is to inspire people,” Growden says. “Making music with people is an incredibly powerful feeling, seeing people open up—that’s important to me. Music’s been my best friend. When I’ve been down, it’s a salve. It’s been an amazing blessing in my life. I’m really grateful, and I have to share that with other people. It’s just what I’m here to do.”

The special guest at Steynberg will be Flagstaff resident Chuck Cheesman, who’ll also appear at the showcase at The Porch on Thursday, Feb. 24 (6:30 p.m.; all ages; free). And while we’re on the topic of Songwriters at Play, you should also know Karen Tyler, Valerie Johnson, & Al B Blue play the showcase at Sculpterra Winery on Sunday, Feb. 20 (1 p.m.; all ages; free).

The (faux) return of Longview!

Remember Longview, the little Cal Poly band that could? They chugged along to such fame that they finally had to abandon their name, which belonged to another, now less-famous band. But they took on the moniker Still Time and have soared to greater heights.

Well, their fans never forgot those humble beginnings, and after much haranguing, Still Time has decided to re-release their raw 2004 album (which they called Still Time while playing under the name Longview). Now called Longview LP: The Doublewide Days, the album is sort of a tribute to the doublewide most members lived in at the time. They’ve since split their time between a Cayucos yurt and their trusty RV, which has taken them around the country in search of new fans.

“The songs have been re-mastered but not re-recorded because Still Time felt it was important to have their initial recordings available, not only to satisfy the many requests of their older fans but to share our roots with our new fans,” according to the band.

The Doctor will see you now!

If you’re in the mood for a well-recorded, tight little blues record, check out Dr. Danger’s new self-titled 11-track debut, which they’re releasing to the public on Saturday, Feb. 19, during the SLO Xtreme Beers Festival from 1 to 5 p.m. at the SLO Vets Hall ($45 presale, or $55 at the door; 21-and-older; get tickets at Central Coast Brewing and Boo Boo Records).

Fronted by Brad Kyle, Dr. Danger is now in its fourth year, having developed a devoted following at places like Sweet Springs Saloon, the SLO Down Pub, Mongo’s, and The Pour House. Fans seem to dig their soulful mix of Chicago Blues, honky-tonk, doo-wop, and ’60s and ’70s Bay Area blues rock.

On their debut, they mix classic covers like Jerry McCain’s “She’s Tuff,” made famous by the Fabulous Thunderbirds; Merle Haggard’s “Workingman’s Blues;” Bill Wither’s “Use Me;” and Sam Cooke’s “Bring it to Me.” But Kyle and company’s own compositions blend nicely into the mix, especially the funky, harmonica-driven “New Depression Blues,” the anthem for our economic hard times. The closing track, “San Francisco,” sounds like it’s coming straight out of psychedelic Haight Street circa 1965.

Parents, bring your 2- to 7-year-olds to see singer-songwriter Melissa Green when she plays the Atascadero Library on Thursday, Feb. 17, at 3:30 p.m. Expect interactive pop-folk music from Green’s first and second albums and sing-along picture books, including her newly published book The Seahorse Song.

Cowboy and Indian is apparently one of the most talked about new bands on the Austin music scene. They’ll bring their soulful folk to The Steynberg Gallery on Thursday, Feb. 17 (8 p.m.; all ages; $10). According to the band’s bio, “The rootsy trio began when Jazz Mills (T-Bird and the Breaks) got together with Jesse Plemons to write their first song. The collaboration took off, and before long the pair was drawing major buzz at SXSW. Daniel James (frontman of SF-based Leopold and His Fiction) soon joined the band to complete the trio.”

The Westmont College Orchestra and Chapel Band will perform at St. John’s Lutheran (959 Valley Road, in Arroyo Grande) on Friday, Feb. 18, at 7 p.m. The performance is free and open to the public.

Fado singer Ramana Vieira will perform her sultry, dramatic repertoire at The Steynberg Gallery on Friday, Feb. 18 (7:30 p.m.; all ages; $15 presale or $18 at the door). “Born in San Leandro to Portuguese immigrants, Ramana’s personal relationship to fado lies deep in her family history,” says her bio. “Her grandfather was a famous musician and composer from Madeira Island, and Ramana was exposed to the voices of Portugal’s past at a young age. Many of the songs on her recordings are inspired by Ramana’s main influence, Amália Rodrigues, known as the ‘Queen of Fado,’ which she heard on her mother’s record collection as a child.”

The Damon Castillo Band will play “Music for the Next Generation” on Friday, Feb. 18, at 8 p.m. in the Clark Center as part of the venue’s new “Local Spotlight Series,” which this week features members of the SLO Symphony and the Damon Castillo Band in a concert that combines the band’s “signature rock/soul/pop sound with stirring symphonic accompaniments to create a musical masterpiece that fills the senses and cleanses the soul,” according to organizers of the benefit concert, with proceeds going to local music programs. Call 489-9444 for ticket info.

The Clark Center will present “Take Me Home: The Music of John Denver” on Saturday, Feb. 19, at 8 p.m. when the music of the late John Denver is performed by Jim Curry, whose voice was heard in the CBS-TV movie Take Me Home: The John Denver Story. He’s got an uncanny ability to mirror Denver’s voice on tracks such as “Rocky Mountain High,” “Sunshine,” “Calypso,” and “Annie’s Song.” Call 489-9444 for ticket info. 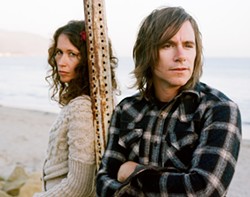 Some gorgeous folk is on the bill at The Steynberg Gallery for Saturday, Feb. 19, when Sarah Lee Guthrie and Johnny Irion will appear with bassist Charlie Rose (The Crooked Jades, Tony Trischka, Adrienne Young). The duo is touring in support of their forthcoming second full-length studio album, Bright Examples, produced by Vetiver’s Andy Cabic and Thom Monahan (Vetiver, Devendra Banhart) and recorded at Dreamland Studios in Woodstock, N.Y. The 12 original songs showcase a new electric sound for Sarah Lee and Johnny: “The duo’s patented country-rock songwriting and rich vocal harmonies beautifully intertwine with Vetiver’s West Coast pastoral psych-rock aesthetic,” according to press materials. The show’s at 8 p.m. Call 547-0278 for ticket info. 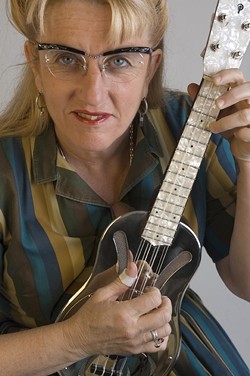 The Red Barn Community Music Series brings you the country blues and hillbilly boogie of Del Rey and Suzy Thompson on Saturday, Feb. 19, at the Red Barn at South Bay Community Park in Los Osos (7 p.m.; all ages; $10 at the door; come at 6 for a potluck). Del Rey, who plays a syncopated style of guitar based on prewar blues and barrelhouse piano traditions, was called by Acoustic Guitar Magazine “one of the best fingerpickers of this or any generation.” As part of the potluck, people are encouraged to join in a chili cook-off.

On Sunday, Feb. 20, trombonist Dan Barrett is the next attraction at the Famous Jazz Artist Series at the Hamlet. This internationally renowned horn player is one of the masters of the swing era style. Bassist Darek Oles and drummer Darrell Voss will accompany, and series co-producers Charlie and Sandi Shoemake (piano/vibraphone and vocals) will also join in the fun. There’s a 4 p.m. show for $15, a 7:15 p.m. show for $12, or see both for $20. Call 927-0567 for reservations.

Sustenance Cooking Studio continues to prove that music and food make a winning combination. On Sunday, Feb. 20, the tradition continues with the excellent Café Musique in an event billed as “Tapas, Tunes, and Tangos.” Tapas, of course, are many small plates of delectable food that add up to a big meal full of diverse flavors. They’ll be served from 5 to 6 p.m., followed by an eclectic blend of Gypsy, folk, eastern European, and other music from 6:15 to 8:30 p.m. Dinner and the concert is $30 (including coffee, tea, and water). The cost for the concert only is $15. Bring your own wine for a $5 corkage fee. Call 543-2186 for reservations.

Local group Safety in Numbers will provide music to drink coffee to on Sunday, Feb. 20, at Sally Loo’s when they appear with Old Hand (7:30 p.m.; all ages; free). Safety In Numbers is “a power pop group of eight neighbors and friends, who have a shared love of good music and good beer,” according to organizers. “They take pride in being a strange mix of The Kinks meets Richard Hell meets The New Pornographers meets The Black Keys. It’s a genuine freak show. Old Hand is a powerful rock trio delivering up rocking riff-based gems, with a side of kickass and a dash of The Mars Volta. Come with your helmets on.”

The Cataracs and Hyper Crush play The Graduate on Monday, Feb. 21 (order online at groovetickets.com). The Cataracs are an American hip-hop indie-pop duo formed in Berkeley. Hyper Crush is a band from Los Angeles that makes copious references to the decades of the 1950s and 1980s. For example, they’ve made references to Nintendo, Technicolor, Hypercolor clothing, and Genesis.