From the outside, Hana Teriyaki is as humble as you can get. But inside you get to eat home-inspired Korean dishes and American-Korean fusion. Hana Teriyaki is located at 1477 Creston Road, Paso Robles. Open Monday through Friday from 7 a.m. to 8:30 p.m. Give them a call at (805) 226-8581.

In case you had no way of knowing, we actually do have a Korean restaurant in Paso Robles. Many of us have little reason to drive beyond Paso Robles High School and Jamba Juice on Niblick Road, but I wanted you to understand that you should venture the full length of Niblick, for one reason and one reason only: Hana Teriyaki.

People have been carrying plastic to-go food bags out of this hidden gem steadily for eight whole years now. I know that Hana Teriyaki sounds Hawaiian or Japanese. But it's not!

I feel a bit miffed. It seems people were holding out on us. I happened upon the place in an internet search for something entirely different (perhaps relaxing images of Hana, Maui) and learned my poor taste buds were missing out!

When I went, I saw all of the people who already knew. Construction workers in their dusty jeans taking a salty breather on their lunch break; college kids coming in and out, paying in quarters and crumpled dollar bills for bags of Korean food to-go; commuters stopping in for a breakfast burrito and a coffee; and chicken udon noodle soup-loving children sitting with their families, filling up the wooden chairs of the small, seven-table room. Even Camp Roberts soldiers were dutifully patronizing Hana in their fatigues.

Well, the bottom of the lamp is dark, as the Korean proverb goes. But now I can see the light: Hana Teriyaki has authentic Korean dishes like beef barbecue ribs and kimchi soup. They serve vegetarian eggrolls and pork-filled potstickers. But Hana doesn't stop at Korean dishes. On the menu is a whole section of sandwiches and burgers known as burwiches, including an Asian-style version of a Philly cheesesteak sandwich with a splash of teriyaki.

Korean couple and owners, Hana and Park, team up on the cooking, one of their two daughters runs the register and helps steer you through the unending, diverse menu. Hana herself comes out of the kitchen wearing a little white apron. She is undeniably sweet and friendly.

Thoughtful chotchkies are all around Hana's place: Next to a work desk, a bookshelf that looks like it came straight from the living room holds porcelain keepsakes, teapots, plushies, and books.

I'm not going to pretend I know anything about Korean food. The only Korean dish I attempt in my kitchen is literally called "Cheater Korean Beef."

I had no Korean buddies inviting me over to dinner as a kid growing up in the East Bay. I just don't get enough exposure. With this limited access to Korean food, I figure the best way to go is to order the most traditional dish on the menu. Of course, my sons are a little different. They are magnetically drawn to anything teriyaki. So two of my three sons ordered the teriyaki beef. The savory Hana Teriyaki is a rather large portion, served with rice on a big white plate. My son Tony was sweating over choosing heat level "medium" from a choice of five heat levels.

"Hurts so good!" he kept saying, mixing in enormous straw pulls from his iced green tea between bites. He's still talking about how he wants to go back for more. 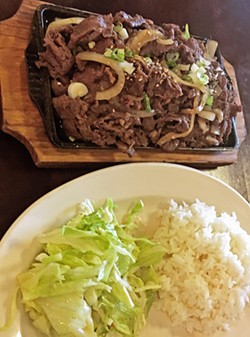 I ordered the bulgogi (bool-GOH-gee)because I wanted to upstage my own Cheater Korean Beef. You can get it with kimchi or salad. I went with the salad in the sesame dressing. Apparently, Hana makes fresh batches of kimchi on a weekly to biweekly basis. Bring in your own jar for a 50-cent discount! Half jars go for $8 and full jars go for $15.

My order of bulgogi was so huge, I shared it with my son. The thinly sliced, juicy-textured, pan-roasted steak, which originated from the Pyongan Province of the Korean Peninsula, was marinated in a sweet, almost caramelized, nutty blend of soy, brown sugar, garlic, ginger, and sesame oil. Park smiled and bowed, placing the griddle of steak in the center of the table, with Korean rice and iceberg salad on a separate plate.

Another authentic dish to try is the Dolsot (hot stone) Bibimbap (BEE-bim-bap). The term "bibim" means mixing different ingredients, while the "bap" refers to the rice part, but basically Dosot Bibimbap is a warm hot stone bowl full of rice topped with sauteed veggies or kimchi, gochujang (chili paste), soy sauce, a fried egg, and your choice of beef, chicken, pork, or tofu. Bibimbap is historically known as a Korean dish served on the eve of the Lunar New Year to eat up all the leftover side dishes before the New Year comes around again. It's extremely popular in Korea and (fun fact) was listed at No. 40 on the CNN Travel reader's poll of the world's 50 most delicious foods.

Hana's menu is pretty long, but if you need help, don't worry. Just ask. The Hana Teriyaki family will help you on your culinary travels. I'm just so glad I finally found them. Δ