'American Made' is a story of American hubris

Doug Liman (Swingers, The Bourne Identity, Edge of Tomorrow) directs Tom Cruise as Barry Seal, a pilot contracted by the CIA to run drugs in the late-'70s and '80s. The screenplay by Gary Spinelli is based on real events. (115 min.) 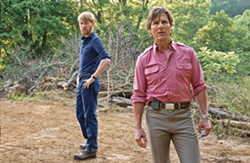 Glen The Contras and the Sandinistas, the Iran-Contra scandal, the CIA-backed crack epidemic, Pablo Escobar and the Medellín cartel, Ron and Nancy Reagan's "just say no" War on Drugs, General Noriega, Oliver North—you couldn't make up a more implausible series of events or more ridiculous set of characters. Once again, truth is stranger than fiction, and it's all tied together in the story of Seal, a TWA pilot who gets recruited by CIA handler Monty Schafer (Domhnall Gleeson). Schafer discovers Seal is sneaking in low-level contraband such as Cuban cigars on his flights and half extorts and half seduces him into being a CIA operative. It's clear Seal is a risk taker who's bored shuffling commuters between urban hubs so he jumps at the chance to take aerial photos of the burgeoning communist uprisings in Central America. The problem is the CIA doesn't pay that well, so when drug dealer Jorge Ochoa (Alejandro Edda) asks Seal to carry drugs back to the states on his return flights for $2,000 a kilo, Seal does the math. Meanwhile Seal's wife, Lucy (Sarah Wright), thinks her husband is still a TWA pilot, and Seal's handler Schafer doesn't really care what Seal does as long as he continues working for the CIA, which soon adds gunrunner to his resume. Before long Seal is running out of places to hide his money, which brings the FBI sniffing around, and things really start to fall apart when Lucy's loser brother JB (Caleb Landry Jones) shows up with his hand out. Seal turned out to be exactly the right kind of rube for the CIA to exploit, and it's all set against the late-'70s and '80s sleaze culture. It's an amazing story and even more amazing that Seal managed to keep it all afloat as long as he did.

Anna If the words "based on a true story" hadn't flashed on screen before the first scene, I wouldn't believe it was true. The wild ride of Seal's life seems too fantastical and insane to be real, but truth being stranger than fiction wins out here. While I can't say I'm too impressed with Cruise's personal life, the guy's acting chops are top of the line. Seal is able to charm, woo, and trick everyone he needs to in order to keep business alive and cold, hard cash flowing in. His world is not without trouble though, and soon enough he's forced to pack up his family in the middle of the night and move to Nowheresville, Arkansas. It isn't the end of the road for his adventure yet, though. Shafer shows up immediately and drives Barry to an empty airport, informing him that this, along with the 2,000 or so acres between it and Barry's new home are his. The allure of more money and bigger business means Barry takes on partners, soon running drugs, guns, and money all over the Americas with wild abandon. The guy's a problem solver, a charmer, and is known as the "gringo that always delivers."

Glen I definitely learned new info about this time in American history. For instance, I had no idea Seal was flying up Contra soldiers to train on his 2,000-acre spread in Mena, which the CIA has set up as a war games facility. I also didn't know that many of the Contras who arrived simply hightailed it out of there and became illegal immigrants in the U.S. What a mess! This film also explores a few important ideas, the main one being that the CIA is a rogue organization more worried about the ends than the means. Schafer is untouchable even though his actions lead to an enormous amount of illegal action. The entire situation was a debacle! The Contras didn't really want to fight, so the weapons Seal delivered to them ended up in the hands of the drug cartels. The U.S.'s irrational fear of communism led us to engage with a lot of bad people, General Noriega among them. I'm sure this film skips over a lot of Seal's travails in the name of entertainment, but the film works as an exploration of American hubris. We all too often believe we're smart enough and cunning enough to control uncontrollable situations, and in the end, both Seal and the CIA proved to be inept fools who only made things worse. Maybe that's the American way.

Anna At one point, the state police, DEA, and FBI all descend on Seal's compound in a massive raid, yet a phone call from then-Gov. Bill Clinton has Seal walking out of there free as a bird. It really is amazing that all of this was going down, and since my knowledge of the whole Iran-Contra scandal and what was going on around it is hazy at best, it was a buck wild ride to watch. (Give me a break, I was a toddler at the time, and history generally isn't my jive.) The sheer craziness of Seal's antics along with the scenes of him and his wife cramming cash into every nook and cranny, including burying it in the backyard, make for a pretty unbelievable tale of a man who much like Icarus flew too close to the sun and ultimately paid the price for his thrill-seeking adventures. It's fast paced fun that will keep you entertained from beginning to end, and Cruise pulls off this larger-than-life character with gusto. It's not a movie I'll look to own when it makes its way to DVD, but it's worth an afternoon at the theater if you dig this sort of highflying adventure. Δ