The Creston Line frontman Jon Bartel starts his new eight-song album, Fool's Gold, with his Yoko moment about a relationship that changes the protagonist's imagined life trajectory: "Your daddy took one look at me and he gave me the evil eye/ But you like to sweep the gutter so you come down here to die/ On the night that we got married yeah you smoked a blue Gauloises/ I wrote you up some lyrics got 'em tattooed on my arm// Now the boys keep on dancing with the whiskey/ The girls keep on sleeping with the damned/ And it used to feel like glamour now it feels a lot like greed/ You and I keep gunning down the dream/ You and I keep breaking up the band// Now it's late nights at the dive bars early mornings with the kids/ Words we never said and words we wish we never did/ It's sneaking out that backdoor for that midnight cigarette/ You taste it when you kiss me I'll bet it tastes just like regret," he sings on "Gunning Down the Dream."

It's a potent opener to an album filled with hooky, literate, desperate, amazing songs written by one of our area's best songwriters. The songs range from a modern twist on an Old West ballad with "David and Caroline," to some John Moreland-style, triple-distilled, deeply emotional shit like "Waiting Ain't My Style."

"I was down in Houston just wandering around to see what I could see/ When all of a sudden a gunfight broke out in the street next to me/ The outlaw in the duster he carried him a sawed-off shotgun/ The other man was David Green he carried him a Navy 51/ David got two rounds off and caught a load of buckshot in the chest/ Blood it came a-weepin' like a funeral mourner out of his vest/ I kneeled down beside him in the dust and blood to see what he would say/ He turned around to look at me his teeth were set his eyes were gray// He said tell my momma I ain't coming home/ Tell my daddy I lit out alone/ Tell my Caroline I'm gonna miss her all the time/ Tell her I tried, tried, tried, Lord Caroline!" he sings on "David and Caroline"—a fun romp through outlaw country.

"It's a dark album," Bartel admitted during a text exchange, "but it's as raw as I've ever gotten with songs, I think."

Bartel is a true poet, and the songs' melodies have a familiar feel, making them immediately accessible. But he's always ready to throw an unexpected turn into the music. Two of the songs will feel very familiar if you were a fan of Bartel's rock band, American Dirt—both "Pinewood Box" and "Dirty Streets" were American Dirt songs, but they've been retooled to fit The Creston Line's Americana sound.

Bartel and The Creston Line will release Fool's Gold ($12) on Friday, May 10, with a show at A-Town's Bristol's Ciderhouse (7 p.m.; free), with JW Teller opening. The album will also be at Boo Boo Records in SLO and Traffic Records in A-Town. You can stream it at Bandcamp, Amazon, iTunes, Google Play, and Spotify.

This is The Creston Line's second full-length, and you'll wish there were four or five more songs on it. Each one's a gem, from the indigo-dark folk to the galloping alt country.

"The album focuses on the themes of hard fought relationships, anxiety, addiction, suicide, and the daily battle against cynicism and despair," Bartel explained in press materials. "Despite the intense subject matter, the songs are resolute in one thing—life is better than death; the spontaneous, frustrated exclamation at the end of 'Dirty Streets' sort of says it all—'I ain't gonna go.'"

If you want to listen to some kickass Americana delivered by a terrific band, you should go!

For moms and Live Oakies

The lineup for the 31st annual Live Oak Music Festival has been finalized, and in the weeks preceding the Friday, June 21, through Sunday, June 23, festival, I'll be featuring some of the bands, but this Sunday, May 12, you can check out two of this year's Live Oak acts when KCBX 90.1FM and Good Medicine Presents offer a free Mother's Day and Live Oak teaser show (1 p.m.; all ages; free). Soulful Americana act Moonshiner Collective and alternative rock act Carbon City Lights will both play "Mother's Day in The Mission."

Moonshiner Collective is multi-instrumentalist singer-songwriter Dan Curcio and whomever he's enlisted from his large range of musical cohorts—playing rock, blues, funk, and more. According to press materials, "The band name and ethos was derived from the experiences Curcio had playing music under the moon and stars with friends while living in a yurt overlooking the Pacific Ocean in the small California beach town of Cayucos." The current lineup includes Ryan House (drums), Mark Pruett (keys), Ricky Reid (lead guitar), and Mikey Socias (bass), and Curcio (guitar, piano, vocals).

Carbon City Lights is a groovy alternative rock band based in SLO. They blend folk, pop, and rock with some funk. Performances feature extended jams with tight rhythm and dueling guitars.

Good Medicine Presents and Numbskull also have a couple of shows they're putting on at The Siren this week, starting with Ben Morrison of Brothers Comatose and his band on Sunday, May 12 (7 p.m.; 21-and-older; $12 presale at Boo Boo's and ticketfly.com or $15 at the door).

First of all, no, the Brothers Comatose aren't breaking up. Bite your tongue! Morrison just had some time between tours and wanted to try something different. Get ready for some soulful Nor-Cal rock 'n' roll. There's even backing vocals on some tracks of the new album!

Also at The Siren this week, check out the amazing Celtic rock act The Young Dubliners, brought to you by Traffic Records and KCBX 90.1FM, on Friday, May 10 (7:30 p.m.; 21-and-older; $18 presale at Boo Boo's and ticketfly.com, or $20 at the door). Normally, you might not see this band locally, but frontman Keith Roberts calls the Central Coast home, so they're playing a show here before embarking on a summer tour that will take them to big festivals across the U.S. This is a truly amazing live show! Kenny Taylor will open.

Willie is 86 years young, he's won nine Grammy Awards—most recently in 2018 for My Way in the Best Traditional Pop Vocal Album category—and he smokes more weed than Jeff Spicoli. I could start listing his more than 200 albums, all his hit songs, his movies, his collaborations, his IRS travails, his Farm Aid shows, or his memoir, It's A Long Story: My Life.

Bottom line, if you've never seen him live, you should. He's a national treasure who won't be around forever. If you have seen him live, then you know what's up. Long live Willie! Long live his busted-up guitar, Trigger! Plus, every pair of tickets includes a physical CD of Willie's new studio album, Ride Me Back Home, coming out on June 21. 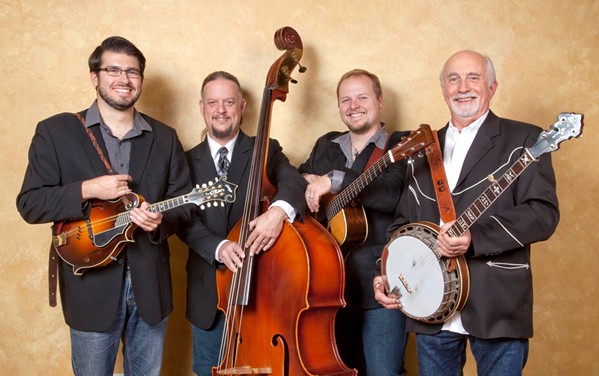 The Parkfield Bluegrass Festival returns to the picturesque hamlet of Parkfield, aka "Earthquake Capital of the World," from Thursday, May 9, through Sunday, May 12. Now in its 21st year, this festival boasts an amazing lineup of performers, too many to get deep into here, so check their website—parkfieldbluegrass.org—for details. This year's biggies are Special Consensus, The Cache Valley Drifters, Canadian band The Slocan Ramblers, and the amazing Phil Salazar & The Kinfolk. Camping may already be sold out, but it's a fun day run! Δ