Don Lampson’s face is a roadmap of his life, a well-creased travelogue of a guy who was a rebellious teenage greaser, an amateur exotic animal handler, an unrepentant redneck, a humble Vietnam vet, an unhardened former prison guard, and a lifelong musician whose voice sounds like a sack of well polished river stones dragged behind a rusty pick-up truck down a dusty country road.

On his new CD Songs From Then, and Now, Lampson and his crew of crack musicians cover public domain classics such as “House of the Rising Sun,” Charles D. Tillman’s 1889 song “Life’s Railroad to Heaven,” W. Maberry’s 1909 tune “Hills of Roane County,” Hugh Cannon’s 1904 lover’s murder ballad “Frankie & Johnny,” 1903’s anonymous “Wreck on the C & O Bridge,” and the traditional “Look Up, Look Down that Lonesome Road.” Packed in between are five Lampson originals that fit right into these historic tunes.

“The songs from Now are my reflections inspired from true life experiences and/or a vivid imagination,” Lampson writes in his liner notes. “They are stories of love and loss and loneliness, accompanied by the ever changing music, which has run through my head since I began playing decades ago.”

On “Twelve for a Dime,” for instance, Lampson penned a song that “reveals the frustrations of a barroom singer realizing that he’s simply background music for an indifferent crowd”:

“Well I played my guitar while I sang my song and I gazed ’cross that dim lit barroom, seeking a face that would give me a smile and drive out this feeling of gloom,” he sings forlornly.

Lampson’s a fine picker who’s been around these parts a long time and has cultivated relationships with many of the area’s best musicians, and on this CD he’s backed by Charlie Kleemann on stand-up bass; Bob Liepman on cello and mandocello; Eric Brittain on guitar, mandolin, fiddle, and dobro; Dan Mazer on banjo and dobro; Julie Beaver on violin; Dorian Michael on guitar; Toan Chau on electric guitar; and Wally Barnick on electric bass. The highlighted among these players will join Lampson as The Vigilante String Alliance for his “Fifth (Attempted?) Annual Birthday Musicale” at the Steynberg Gallery this Saturday, Jan. 30 (7:30 p.m.; all ages; $15; reserve tickets at 547-0278).

Lampson’s a first-class raconteur, a true one-of-a-kind whose 500-watt grin can stop either a grizzly bear or an attractive woman in their tracks. He’s a frequent Facebook poster of terrific photos of the wilds and environs of his North County rancherito, vintage photos of his wayward youth and travels, and sometimes cryptic posts where’s he’s wont to misuse question marks? Yep, just like that. And almost always, he closes his missives with his trademark “HawHawHaw!”

Get yerself a taste of some old school Americana from the closest thing we got around these parts to a real life guddamn American folk hero. HawHawHaw!

Multi-instrumentalist John Wessel (flutes, saxophones, keyboards, acoustic guitars, voice) seems tireless to me. By day he works at Atascadero State Hospital, but by night he’s a musician playing sometimes two or three gigs in a week—and he still finds time to release albums like The Spirit of Life, his new CD on Rhombus Records. 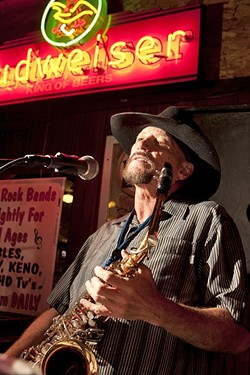 It opens with the title track, a gritty reggae and swamp boogie song punctuated by Wessel’s saxophone and flute playing. “The Game” follows, opening with shimmering cymbals, crisp guitars, and bold flutes before sliding into a tortured ballad: “It’s your move. Play the game. Nothing to lose. No one else there to blame. So you’ve done your time in places you don’t want to be, trying to walk a straight line between freedom and dignity. Have you ever wondered who you are?” The song structure sounds like a lost Beach Boys song.

Wessel gets help on his 10-track record from a couple of well known pros—Jimi Macon of The Gap Band and Glenn Cornick of Jethro Tull—as well as some local notables, but lot of these tracks are Wessel in his home studio playing all the parts himself. He covers Neil Young’s “A Man Needs A Maid,” but otherwise these are all Wessel’s original compositions save for four tracks he co-wrote with some of his guest musicians—Howard Lucas, Macon, Evan Hiney, and Bill Tomkin.

At the time of this writing, there were still tickets for The Devil Makes Three at the Alex Madonna Expo Center this Thursday, Jan. 28 (6 p.m.; all ages; $25 at ticketfly.com/event/1000845). The Numbskull and Good Medicine Presents show opens with Parker Millsap. Good Medicine also has a free pop-up concert at Tooth & Nail Winery this Friday, Jan. 29, with Dan Curcio of Moonshiner Collective (5:30 p.m.; all ages). 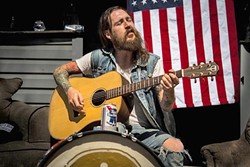 Singer-guitarist Lorin Walker Madsen returns to The Pour House at 7 p.m. this Thursday, Jan. 28. The outlaw country artist “blends whiskey, romance, and a road-tough attitude into his own brand of high desert honky punk—gritty vocals and honest lyrics laid over his take on traditional country music,” according to his bio. 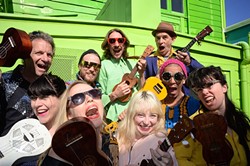 Can you have too many ukuleles? You can contemplate that this Friday, Jan. 29, when the Wellington International Ukulele Orchestra plays the Cohan Center of the Performing Arts Center (all ages; 8 p.m.; $22.40 to $58 for student and general admission tickets, available by calling 756-4849). Expect “charming humor, disarmingly small ukuleles, and sublime musicality,” not to mention “their signature sound featuring high-octane ukulele solos, heavenly multi-part vocal harmonies, and an impressive range of ukuleles, flamboyant outfits, delightful theatrical effects, and convivial crowd participation,” according to organizers.

Get your monthly dose of “Hot Swingin’ Jazz” this Sunday, Jan. 31, when the Basin Street Regulars Jazz Society presents their monthly dance concert at the Pismo Beach Vets Hall. The jam session starts at 11 p.m. (bring your instrument and join in), followed by the Bye Bye Blues Band from Monterey (1 and 3:30 p.m.) and the Cal Poly Jazz Band (2:15 p.m.). Whether you want to sit back and listen or tear up the dance floor, this is a great deal for $10 (or $5 for members). Food and drinks are available for purchase.

The Symphony of the Vines—a 501c3 nonprofit organization with a mission to “enrich the quality of life of northern San Luis Obispo County through music of the highest artistry and educational experiences, in charismatic and historic settings”—presents “A Hunting We Will Go” this Sunday, Jan. 31, at 3 p.m. in Paso’s Park Ballroom, Paso Robles. Dr. Greg Magie, the founder, conductor and music director, promises music that will conjure the sounds of hunting horns and dogs, by Haydn, Mozart, Beethoven, and Honegger.

The Art of the Protest Song Tour hits the Steynberg Gallery this Sunday, Jan. 31, with Bill Valenti, Farrel Droke, Airene Espiritu, Randall Lamb, and Ranchers for Peace, “coming together for a night of sharing and caring around the notion that songs used to matter in the life of this country,” said R4P member Chas Duncan. “The show will be ‘in the round,’ each artist sharing a few of their favorite ‘historical’ pieces, along with original works.” America’s got a great history of potent musical protest—“We Shall Overcome,” “If I Had A Hammer,” “Strange Fruit,” “Blowing in the Wind”—and this show will be a reminder (7 p.m.; all ages; $15; facebook.com/events/1572659232979556/).

Avant-garde organist Cameron Carpenter returns to the Cohan Center to debut his groundbreaking International Touring Organ on Tuesday, Feb. 2 (7:30 p.m.; student and general admission tickets are $32 to $40; 756-4849 or online at calpolyarts.org). According to his bio, “Cameron is the antithesis of what you’d expect an organist to be. He’s a rebel in classical music—an incredibly outspoken advocate for the digital organ, an innovator of the instrument, with progressive repertoire and showmanship that sets him apart. He favors leather pants, crystal studded boots, and a mohawk to traditional concert attire.”