America's Wine: The Legacy of Prohibition documentary reminds us that regulations from 100 years ago still vex local biz today

Photos Courtesy Of The Wine History Project Of Slo County CORK PARTY Prohibition in the United States legally banned the production, importation, transportation, and sale of alcohol from 1920 to 1933. A little known fact is that Americans could still drink alcohol at home, which may explain the image of this wild and crazy cork party happening during the Prohibition era.

It's been exactly 100 years since national alcohol prohibition in America, which went into effect January 1920, and continued for 13 years. In recognition of this pivotal time in history, the Wine History Project of SLO County has arranged two screenings of America's Wine: The Legacy of Prohibition, a documentary film about Prohibition's effect on today's wine industry. The film will be followed by a panel discussion with filmmakers, plus hors d'oeuvres accompanied by wine from historic local vineyards. The film will be shown at 5 p.m. on Jan. 17 at the Pioneer Museum, 2010 Riverside Ave., Paso Robles, and at 5 p.m. on Jan. 18 at the Monday Club in SLO. Tickets, $25, and information on upcoming Wine History Project exhibits may be found at winehistoryproject.org. To learn more about Free the Grapes, the national grassroots coalition, that seeks to remove bans and streamline restrictions in states that prevent consumers from purchasing wines directly from wineries and retailers, visit freethegrapes.org.

The ghosts of Prohibition still linger in the cool warehouse distribution rooms of our Central Coast wineries. Constitutional amendments of Prohibition enacted 100 years ago—the 18th and 21st specifically—continue to affect the production, distribution, and commerce of wine and other alcoholic beverages throughout the 50 states and abroad.

And according to the folks at the Wine History Project of SLO County, our local wineries still struggle with direct shipping laws from the Prohibition Era. So if our wine-loving brothers and sisters in "dry" states like Mississippi, Alabama, Oklahoma, Rhode Island, Utah, and Delaware want their box of wine shipped directly to them from a winery or retailer, they're plain out of luck. Those complicated, 100-year-old laws won't budge.

The laws are so frustrating, national grassroots coalitions like Free the Grapes have formed to reform wine shipping regulations.

"It's so interesting in the world of wine how difficult it is in some states just to get your wine to consumers who love your wine or love to try your beer, and that's due to these really old laws that date back to Prohibition," said historian Heather Muran of the Wine History Project of SLO County.

She recently attended a Paso Wine Alliance seminar that took on the topic of these exasperatingly restrictive laws. She heard the Alliance brainstorm how to work with legislators to help reform post-Prohibition laws to benefit Paso winery commerce.

"There's long-term effect that still hampers the productivity and the economic impact of getting wine and alcohol (and any kind of alcohol) into different areas of the United States," Muran said.

To illustrate the case in point, the Wine History Project has arranged two showings of America's Wine: The Legacy of Prohibition—at the Pioneer Museum in Paso on Jan. 17 and the Monday Club in SLO on Jan. 18, both at 5 p.m.

The 11-year-old documentary has been retrieved from the archives of the UC Berkeley Bancroft Library—the Wine History Project had to pull some strings to obtain the film copy—to commemorate 100 years since Prohibition, when selling "bathtub gin" in public was a crime and corrupt gangsters made a livelihood of moonshine smuggling.

A first-rate panel of filmmakers—Carla DeLuca Worfork, Dr. Victor Geraci, and Mary Orlin—will join moviegoers afterward for a discussion of the documentary. For history buffs and wine industry geeks, these showings are a must-see. And I don't know if you've been to the Pioneer Museum in Paso before, but you may want to give yourself some time to visit the exhibit dedicated to Prohibition in SLO County.

Central Coast wine history is as rich as the soil that grows our grapes. According to an 1871 Tribune "Column for Farmers" dug up by Libby Agran, project director for the Wine History Project, our earliest vineyardists—Andrew York, Henry Ditmas, and Pierre Hypolite Dallidet—had to be the first to plant vineyards and propagate vines in our coastal microclimates, finding just the right water access and the perfect soil.

But as soon as Dallidet, York, and Ditmas got those vines growing and thriving, some religious zealots went and made wine selling illegal. From 1920 to 1933, our nation banned the production, importation, transportation, and sale of alcoholic beverages. Prohibition was led by some proper (and pissed-off) Protestants (whom were named "drys" back then), miffed by alcoholism, saloon culture, and family violence. To them, alcohol consumption was ruining the country's morals, and the only way to rid the American culture of this perceived evil was to ban it for good.

The documentary covers a span of 100 years of winemaking up until the present, telling the story of how the first wine families overcame obstacles to rebuild their industry after the repeal of Prohibition. Connecting past and present, the film explores the effect of Prohibition on today's wine business: including laws governing direct shipping of wine to consumers; scientific research that influences alcohol and health policy; and the changing global marketplace.

The documentary features archival photographs and film clips, along with nearly 40 interviews and the stories of those who actually experienced Prohibition, including historians, winemakers, members of Congress, and public policy experts.

Among those filmed are the late, legendary wine marketer Ernest Gallo, who was 94-years-old when the film was made, and the late California winemaker Robert Mondavi. Another standout winemaker in the film is the late Brother Timothy, who was 92 during this final interview. 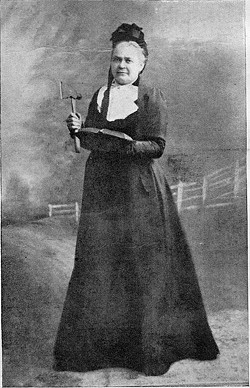 Local historian Muran said that Prohibition was less about abstinence and more about overcoming adversity. Several families survived the era through home winemaking and by producing sacramental wine, used in church services.

"Where you think Prohibition would have hampered the wine industry, actually, there were more plantings and more wine being made during Prohibition," Muran said, "and that was because there was so much of it going underground because it was bootlegged, that the industry and many of the businesses survived."

Pioneering winemakers from after Prohibition were called the "Phoenix Generation" for having to "rise from the ashes of Prohibition," according to the Bancroft Library synopsis. "Equally significant are the insights fueling the continuing societal debate over the issue of alcohol in America."

The Wine History Project will continue to educate the local public on the significance of Prohibition through multiple exhibits showcasing not just the history of the ban of alcohol in 1920, but the statistics and facts relating to Prohibition. Δ

Flavor Writer Beth Giuffre is thankful to be able to sip Central Coast wine in public. Send wine and food tips to bgiuffre@newtimesslo.com.

Editor's note: This article was edited from the original to correct the age of America's Wine: The Legacy of Prohibition.