Neither Supervisor Lynn Compton nor her challenger Jimmy Paulding was in the room on June 15 when San Luis Obispo County election workers processed and counted what was likely the decisive batch of ballots in the 4th District county supervisor race. 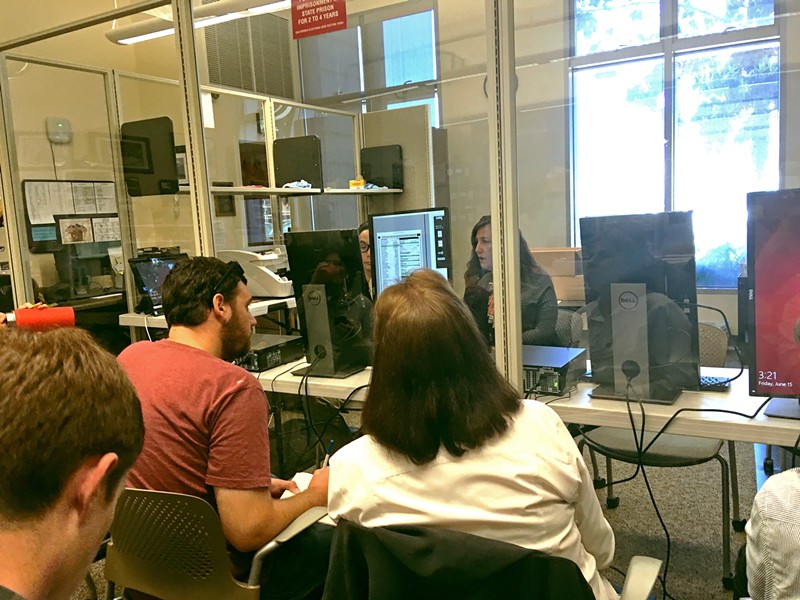 Instead, a small group of the candidates’ closest confidants huddled together in the bullpen of the County Clerk’s Office, observing the wheels of democracy turn.

Tense, their eyes darted methodically between a computer monitor and the notepads in their laps. First, the monitor would show the image of a ballot that had been unreadable by the counting machine due to a voter error. Then, depending on how Clerk-Recorder Tommy Gong decided that ballot got handled, the campaign reps furiously jotted down comments, ballot numbers, and tallies.

The scene was the entire 4th District supervisor race in a nutshell: drama and high stakes. Razor-thin margins. Every vote matters.

“This is an extremely close race. There’s a lot riding on it,” said Tave Holland, legal counsel for the Paulding campaign, at one point during the action.

Going into June 15, Compton held an 81-vote lead over Paulding, with 17,515 ballots counted and about 1,000 still outstanding. By the end of the day, Compton would remain ahead by 62 votes—all but securing her re-election victory and a conservative majority on the Board of Supervisors.

As the campaign members strained their eyes and bit their nails in the Clerk’s Office, Gong and his team stoically maneuvered the room without regard for the partisan observers or their desired outcomes. Gong calmly directed the action, but he rarely had to speak. His office looked like a well-oiled machine churning since the June 5 primary election.

Both campaigns gushed about the quality of the clerk staff. James Sofranko, Paulding’s assistant campaign manager, described them as “incredible.” Compton’s members agreed.

“I’ve been here many times. They have a great staff—the most harmonious, pleasant people to be around,” said Laura Mordaunt, a rep for the Compton campaign.

But Compton has at least one bone to pick with Gong. Earlier that day, her attorneys filed a lawsuit demanding that he stop processing a group of 35 vote-by-mail ballots with non-matching signatures. On vote-by-mail ballots—the overwhelming majority of ballots in this election—the Clerk’s Office is required to verify each signature for its authenticity. If a signature is either missing or doesn’t match what the voter has on record, it won’t count unless the voter fixes the problem.

Compton’s local attorney Stew Jenkins (also chair of the SLO chapter of the ACLU) and her not-so-local attorney Charles Bell Jr. (former counsel to the California Republican Party and attorney for 1st District County Supervisor John Peschong) argued that election code allows voters eight days to rectify non-matching signature issues after June 5, after which they must be thrown out along with unsigned ballots. Gong wanted to give voters more time—until the end of canvassing—to do so, arguing election law gave him that discretion.

After Jenkins and Bell Jr. failed to sway Gong with a formal letter, they filed the lawsuit in SLO County Superior Court on June 15.

“The rule is the rule,” said Andrea Seastrand, a Compton supporter and former 24th District U.S. Congresswoman who was in the Clerk’s Office on June 15. “You either follow a rule or you don’t.”

“It’s a matter of voter responsibility. You have to have a cutoff,” Mordaunt added.

On June 18, Judge Barry LaBarbera issued a temporary restraining order against Gong counting those ballots. After hearing formal arguments from county counsel and Compton’s attorneys on June 19, LaBarbera extended the temporary order another 24 hours, but ultimately ruled against Compton and lifted the order on June 20.

The batch of ballots wrapped up in litigation likely won’t matter in the end. After a June 20 count, Compton was still ahead by 55 votes—9,183 to 9,128 votes—with only 46 ballots outstanding.

Gong said he was expecting to certify the election results on June 22.

On June 13, Paulding told New Times he would consider asking for a recount if the margin was close enough. Neither he nor Compton returned a request for comment, but Paulding published a post to his Facebook page on June 15.

“There are still votes to be counted,” Paulding wrote, “and I want to allow that process to happen.” ∆