Meat-processing plants may be feeling coronavirus impacts—resulting in a product shortage—but membership- and delivery-based meat services are thriving.

Local company Larder Meat Co. delivers subscription-based boxes containing 10 to 14 pounds of pasture-raised dry-aged beef, chicken, and heritage pork in a variety of cuts. Co-owner Grace Lorenzen told New Times that they source their meat directly from private ranches and farms in California, which is not part of the commercial supply chain being affected by the crisis. 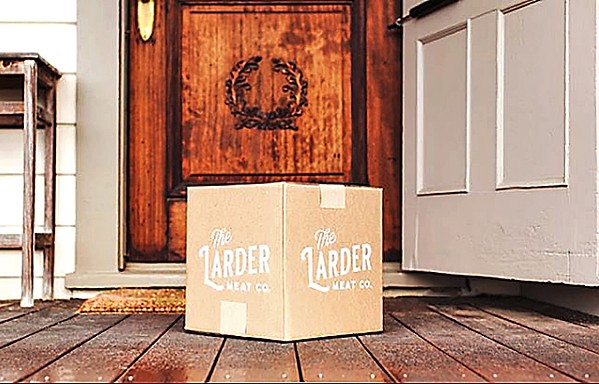 Larder Meat's network of farms has been able to meet the demand they're experiencing.

"However local state and USDA processors are now more impacted than they ever have been, and this will have an impact on our growth unless we can find a solution," she said.

Kiah Twisselman of Twisselman Ranch said she and her family are currently searching for spots with local USDA meat processors to meet demand, which is far exceeding their expectations.

The ranch has operated since 1884 in rural Carrisa Plains. While the family has been ranching for seven generations, Twisselman said the family is new to selling beef directly to the consumer.

"We are traditionally a cow-calf and stocker operation, meaning that we typically don't process our own cattle, and instead sell them at sales yard where they will then be taken to a feedlot for the last 4 to 6 months of their life before being processed," she said.

After opening the ranch to the public for camping and other amenities, the family realized there was a growing interest in beef purchased directly from the ranch, but they didn't step into that market until recently.

"After the COVID-19 pandemic started, we saw a huge demand in our local community for locally grown beef, and we decided it was time to step up to the plate," she said.

The ranch sold out of their steak boxes in less than two days.

Twisselman believes interest in where food comes from has grown over the last few decades, and the pandemic has only increased that interest. She also believes it will remain, to a large extent, after the shelter-at-home orders are lifted.

Local butcher shop Arroyo Grande Meat Co. is feeling the meat shortage impacts as many of its products are out of stock or have more than doubled in price.

Owner and operator Henry Gonzalez told New Times that now is the time for Congress to pass the Prime Act so local farms can sell directly to the community, "bypassing the funnel of rules, regulations, red tape, and corporate greed."

The Prime Act, which was introduced to the House of Representatives in May 2017, would amend the Federal Meat Inspection Act to loosen regulations, allowing meat such as beef, pork, or lamb from custom kill plants (not state or federally inspected) to be sold to consumers, restaurants, hotels, and grocery stores.

San Luis Obispo County Farm Bureau Executive Director Brent Burchett said the existing meat inspection program is important to keep the country's food supply safe. But he believes a balance can be found that continues some level of meat-processing inspection while freeing up local processors to better meet customer demand.

Burchett said the vast majority of meat plants are doing a great job with food safety and would likely continue to have high standards even if a USDA inspector was not on-site. He added that inspection isn't an arbitrary regulation.

It's an insurance policy against a food safety outbreak, Burchett said, for all of the businesses involved in the food system—groceries, restaurants, and distributors.

He said it makes sense to look at legislation like the Prime Act that may provide relief for local ranchers and processors, but right now he said the Farm Bureau is appreciating how vulnerable the food system is nationwide.

"Communities with strong local food infrastructure assets—farmers, ranchers, processors, and ag supply business—are in a better position to weather the pandemic than those without," Burchett said. Δ