Amo Amo members Love Femme (Not a stage name!), Omar Velasco, Justin Flint, Shane Mckillop, and Alex Siegel were musician friends who happened to get together with My Morning Jacket frontman Jim James for an impromptu LA hipster jam session, and voila! Amo Amo was born in 2017. They found almost immediate success by creating lush and dreamy pop songs.

Tracks like "Closer to You" had a reggae-lite feel; "When I Look at You" was pure psychedelic dream pop. More recently, on their 2020 EP Canta, the title track was a song they made especially for Earth Day that employed a little ska "riddim"; also on the EP was the extra silvery "Missed Connection." 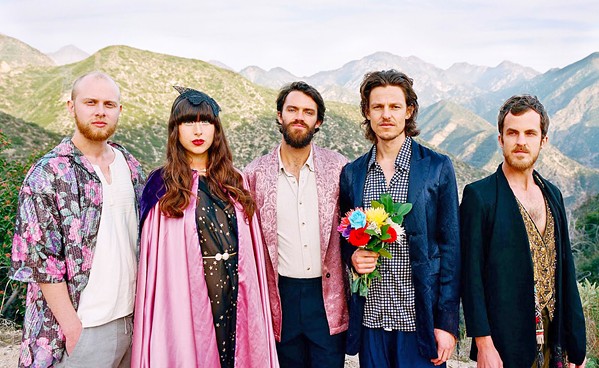 This is music recorded in LA's Silver Lake and available on old-school cassette, which confirms the band's hipster bona fides, and the music is decidedly lovely. It's impossible not to disappear into the music's haze.

"Because we realize the power of music to influence human beings, our songs are concerned with themes of love, connection, healing, and nature," the band announced in press materials. "Especially during these strange times, we feel these things are of utmost importance as we learn how to live in new, hopefully more holistic and healthy ways—with each other, with the Earth, with ourselves." 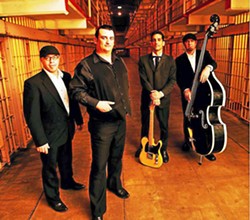 You can tell a tribute band is the best by its acceptance by those truly in the know. Bill Miller owns Nashville's Johnny Cash Museum, which is officially authorized by the Cash estate and houses the largest collection of Johnny Cash memorabilia in the world. Miller said of the Cash tribute band Cash'd Out, "Some people are impressionists. These guys leave an impression."

Miller also facilitated Cash'd Out frontman Douglas Benton's chance to play Cash's famed cherry sunburst Guild guitar. Cash's longtime drummer W.S. Holland has played with Cash'd Out, and, according to Benson, "Cindy Cash came to a show and was moved to give me a glass locket that was her father's."

Longtime Johnny Cash manager Lou Robin has also been to several Cash'd Out shows and claimed that if he closed his eyes it was as if he was "going back in time."

With 13-plus years of touring, thousands of miles, and hundreds of shows under its belt, this Johnny Cash tribute act has earned its black attire as it carries the Cash torch into the future. If you love the Sun Records and early Columbia-era songs, this is a must-see!

Numbskull and Good Medicine presents Johnny Cash tribute act Cash'd Out next Thursday, July 1, at BarrelHouse Brewing (6 p.m.; all ages; $40 to $55 on eventbrite.com).

Also at The Siren on Saturday, June 26, see Dante Marsh and The Vibe Setters (8:30 p.m.; 21-and-older; free). The soulful frontman won the best R&B category at the New Times Music Awards for the last two years in a row. The band is currently working on releasing their first studio album.

Unfinished Business will be throwing a CD release dance party at the Rotary Bandstand in Nipomo Regional Park on Saturday, June 26 (3 to 6 p.m.; all ages; free, though donations are appreciated). Their new album, The Lost Tapes, "is a collection of 10 original songs written in the style of the '60s during the period 2004-2010, and put on a shelf," according to the band. "Ed Miller and Terry Lawless (co-producers) retrieved the almost forgotten songs during the pandemic, and finished them up in Terry's studio." Buy a copy and support original local music!

Deborah Gilmore, an unhoused jazz singer, performs on Sunday, June 27, at Seeds on Garden Street in SLO starting at 3 p.m. Deborah has been trying to get back on her feet as she works to secure permanent housing. Help out on her gofundme page @f/w7tk9-support-deborah.

Tickets are going fast for the Whale Rock Music Festival (Sept. 18 to 19, at whalerockmusicfestival.com) as well as a bunch of big upcoming shows at venues such as Vina Robles Amphitheatre (vinaroblesamphitheatre.com with Jon Bonamassa up first on July 31), the Fremont Theater (fremontslo.com with Tommy Castro coming on Sept. 10), the Avila Beach Golf Resort (websites vary by show producer, but for Rebelution coming on Aug. 15 visit californiarootspresents.com). Be warned! There are a lot of websites that look like the official one but are actually intermediaries that will gouge you!

The Basin Street Regulars are still hosting their monthly hot jazz concerts virtually, and this Sunday, June 27, you can stream The Jump Jax (2 p.m.; linked through pismojazz.com to their YouTube channel as well as facebook.com/BasinStreetRegulars. You can watch the show for free, but donations are encouraged at paypal.me/BasinStreetRegulars).

The Jump Jax have their own spin on the jump blues genre, delivering feel-good covers and originals that will get you on your feet. You might hear a blues tune followed by a rockabilly song followed by swing, soul, and more.