When the Wellness Kitchen's Nancy Walker asked Amy and Jaime Paniagua to take over in mid-2020, Amy said her first thought was "Take over what?"

She and her husband launched a frozen juice company called Veggie Pods in 2019, but they were not restaurateurs and certainly didn't know how to cater food designed specifically to nourish area residents with cancer. But Amy and Jaime are the type of people who never pass up an opportunity, so they decided to meet with the owner of the Templeton building that housed the Wellness Kitchen.

"The rent was so great and so affordable, and we just thought about it, and we never think about things for a long time because we're always afraid somebody is going to snatch it up," Amy said. "But we were like, 'Let's just try it.' And here we are, going into our seventh month."

Amy and Jaime's Place took over the space that held the Wellness Kitchen during the summer of 2020, but they are forging their own path with a spot offering an ever-changing breakfast and lunch menu and local giftable items. As one of the only food places off Las Tablas Road near Twin Cities Community Hospital and all of the other medical offices, Amy said a lot of medical professionals stop in to grab a bite.

Giant breakfast burritos with homemade salsa and fresh-baked muffins, scones, and Old West Cinnamon rolls hit the front counter for breakfast, with special salads, sandwiches, and wraps for lunch, such as a mixed greens with cranberry goat cheese, beets, walnuts, and a little orange zest or a tortilla wrapped around romaine lettuce, roasted chicken, cucumber, tomatoes, and ranch dressing. Giant slices of quiche are in the fridge alongside that decadent bone broth that the Wellness Kitchen used to offer and more. And soups such as Splash Café's clam chowder or a chicken veggie are in the slow cooker every day.

Amy posts the daily specials on social media each morning

"All of our food is super healthy and clean," Amy said. "We do some naughty things."

And of course, you can find Veggie Pods in stock at Amy and Jaime's Place as well as a handful of other spots around the county. The Wellness Kitchen carried them, which is how the Paniaguas knew Walker in the first place. Manufactured and packaged in Nipomo, Amy said they use all local fruits and veggies, with 2 to 6 grams of sugar per pod. 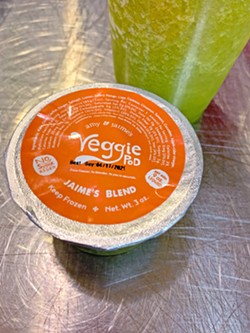 For the green pod, a lot of ginger, a little cayenne, some spirulina, and bananas are blended whole, shot into plastic ramekins, and frozen right away. You can just take a pod out of the freezer and throw it in a blender with 9 ounces of coconut water or whatever you want, Amy said, and you've got a nutrient-packed juice whenever you'd like it.

With a 6-month shelf life—lab-tested—the pods stay fresh in their individual serving containers.

"Once you start drinking one, you have to have one every day. They're super cleansing," she said.

And Amy does have one every day. She has to. She's addicted. And has been since before Amy and Jaime moved to Paso Robles four years ago. The green juice addiction started when the couple was still in Newport Beach.

"Jaime went through a really bad hip replacement and diabetes before we moved here. And I was going to the gym down south and going to the local juice bar getting a greenie," she said. "During that time, we were laid up at home for a few months, because he was immobile." 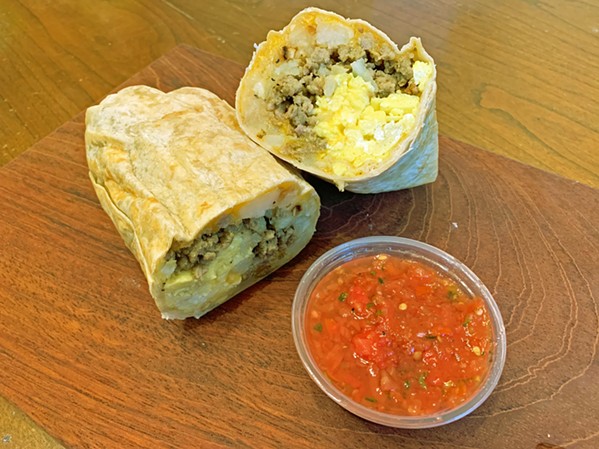 As a product developer—she partnered with Danville chef Patrick Schoolcraft to develop a frozen award-winning chocolate soufflé 2006/2007 that found its way to retail shelves in Whole Foods and Costco—Amy said she just had to figure out "what that lady's cooking up at the local juice bar." They wanted it to be fresh, fast, convenient, low sugar, and low calorie. But they couldn't find a manufacturer who would make it the way they wanted until after they moved to SLO County.

They envision Amy and Jaime's place as a café where people can come in, sit down, use the internet, and hang out. Amy sees a place with art on the walls and relaxing vibes. However, the café and gift shop opened in the middle of the COVID-19 pandemic.

"Unfortunately we couldn't do that," she said. "Our mission here is grab-and-go."

So, the place has morphed into what it is now. A short menu with simple, healthy, and tasty items. Tea towels, masks, mask holders, hats, shrub vinegar cocktail mix, honey, jams, olive oils, and more grace the shelves, all from local purveyors. Amy sees a mini-grocery store stocked with local items in their future. 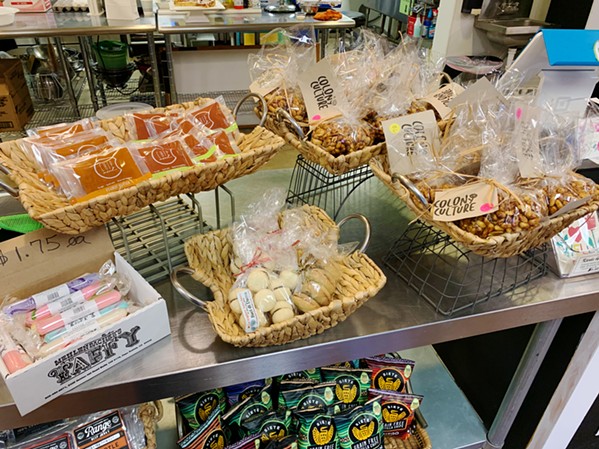 "A taste of local life" is Amy and Jaime's tagline, "And that's the kind of space that we've created, and that really seems to be accepted by the locals," Amy said.

The Paniaguas are in their 60s and had planned to retire on the zinfandel vineyard they purchased in Paso, but that's definitely not what happened. Instead they're up early every morning, in the kitchen every day, and running around the county picking up things like frozen cinnamon rolls from Old West every afternoon/evening.

"When you talk about it, it's like we sound kind of crazy," Amy said with a laugh. "What are we doing?"

Jaime said the entrepreneurial spirit and energy to tackle new things is Amy's strength. When they're in the kitchen at 5:30 a.m. every day, and Amy's brain and body are moving at full speed, Jaime said he wonders where she finds the energy.

But she does find the energy, and her bubbly personality rubs off on their customers.

"They've become our friends and customers. And we see them daily and we laugh and feed them," Amy said. "I think it's just about being part of the community." Δ