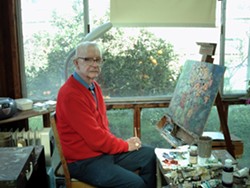 New Times How did you get your start in art?

Chet Hill I took lessons from Don Miles in 1968 in Monterey Park (outside of L.A.). He taught at the San Gabriel Art Association.

New Times Your birthday was on the 23rd. How old are you?

Hill You gotta do something or you’ll go nuts.

Hill I started seriously thinking about it in 1968 when I started the lessons. I went for the social side of it more than anything else ... One thing led to another ... We would go on paintouts in Palm Desert. Then I lost my job with Crown Zellerbach in early 1980. It was a paper company and I designed packages—graphic designing. I can show you a number of things [he brings out a portfolio he hasn’t looked at in decades and we thumb through divine old scratchboards, canned crab meat labels, watercolors, and other advertisements Hill created.]

New Times And you’ve been painting full time ever since?

Hill Oh yes ... and the irony of fate is that Don always told me to get away from detail … to think in vast, heavy brushstrokes, and their values, and not so much in detail. And now I can’t paint in detail because I haven’t got the eyesight and I just feel my paintings are better now than they’ve ever been. Now there is a little bit of demand for my work.

Hill I did, but I’m a little too old for that now. I paint in my studio. I paint from memory, photos, and sketches. 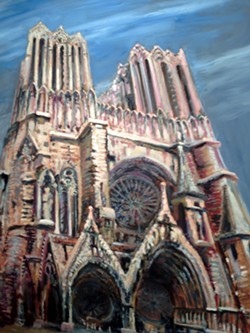 New Times How did the show at La Perla come about?

Hill Shelley [Malcolm – one of La Perla’s owners] chose the pieces that will be in the show. From different years ...Shelley Malcolm I purchased a print for my son five or six years ago that I saw in a deli in Grover and I’ve kept my eyes open for Mr. Hill … and through an acquaintance, I heard about him again, knew I wanted to have his art in the chapel. I love the familiarity of it his work.

New Times You were going to tell me the story about the cathedral painting, Mr. Hill.

Hill That is in Rennes, France ... My brother and I were both in the war (WWII, army) in Europe and after the war ended we were going home for a few days before we went off to Japan, so we thought anyway. ... No one ever dreamed of the atomic bomb.  ... I came back to my tent at Camp Lucky Strike and there was a note on my duffel bag from my brother saying how sorry he was he missed me. .. It was a traumatic time. My company commander and I ran into Rennes to find him but he had already moved out. The cathedral was just across the street from the Red Cross station and I took photographs. This particular version was painted just a few months ago. [Hill has painted the cathedral several times].