An exercise in bad taste

Filmmaker John Waters has forged a career as a purveyor of “good bad taste.” Waters, who established himself as an icon of low- and no-budget cinema with early strokes of brilliance like Mondo Trasho (1969) and the raunchy Pink Flamingos (1972), is perhaps most widely known to mainstream audiences as the writer/director of the accidentally family-friendly film Hairspray. Waters famously cast ex-convicts, former porn star Traci Lords, media heiress and kidnap victim Patricia Hearst, and many burgeoning Hollywood stars in his movies. His films also prominently feature a steadfast gang of Waters regulars called the Dreamlanders—among them Mink Stole, Mary Vivian Pierce, and Ricki Lake—though Waters’ biggest muse was arguably the sassy, plus-sized drag queen Divine. 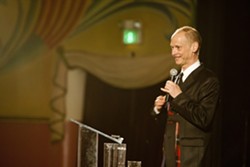 As one would expect of a trash cinema legend, Waters has more than a few stories to tell. Many of them color his ever-changing one-man show, which comes to Big Sur’s Henry Miller Memorial Library this month. But he was kind enough to divulge a few of them to New Times from his Provincetown summer home.

NEW TIMES You’ve long been an ambassador for the city of Baltimore, living, working, setting all of your films there. How have you seen the city change over the course of your lifetime?

JOHN WATERS How it’s changed is it no longer has an inferiority complex about itself. It’s still dangerous. God knows we got an edge; that’s why kids from New York are moving down—there’s no edge left up there! The Wire is not an exaggeration for certain parts of Baltimore. But the weird thing about Baltimore, you can have the most affluent neighborhood, and two blocks away is a ghetto. And you know, the ghetto has some good stuff, too! I’m not saying I’m against that. If I lived in the ghetto, I’d rob rich people, too. It’s common sense. If you’re a rich person, watch your back a little. I’ve never been held up. The only time I’ve ever been held up is in L.A. I thought he was kind of cute! I almost asked him for a date. I said, “Can I have my wallet back?” and he said, “I know, I’m sorry, I’m a junkie.” But I was on my way to the airport. I said, “I’m nervous to get on a plane without I.D.” He said OK, and he gave me my wallet back and just took the money. And that seemed sort of fair.

NEW TIMES How is your book going, Role Models?

WATERS It’s going great. I spent a lot of time writing it, a long time researching it. I’m proud of the book, and I think it was received very nicely.

WATERS I love it. I think it looks like an 8-year-old boy did it in three minutes, but that’s the art of it. But a lot of stores hate white covers, because they get dirty.

NEW TIMES But with you, it seems kind of appropriate.

WATERS Well, you know, a “dirty” book. But even though I wrote about some things I guess that were pretty dirty, I write about it with joy.

WATERS Well, I never just really try to do that. That’s easy to do. So many movies do that. I like to surprise you. I like to get you to think in a different way. What generally interests me are people that were at one time so normal that act so bizarre. They’re the ones I find fascinating.

NEW TIMES This is such an obvious example, but Patricia Hearst was in so many of your movies …

WATERS Patricia Hearst, everything she said was the truth. And the SLA never knew her before she was kidnapped or after she was kidnapped, so they had no idea what she was like, because she was controlled by them the entire time. She did what she did to stay alive. And she made a movie with me I think because, who wants to be a famous victim? She didn’t ask to be famous. So why not do something? She never signed an autograph until she made a movie. She’s the first to admit: In her obituary, that picture in the bank will be there. But that picture, if you ever saw the whole thing, un-cropped, before the FBI released it, the guns could have been pointing at her. But they zoomed in.

NEW TIMES I watched Cecil B. Demented for the first time recently, and it’s kind of her story.

WATERS She plays the mother of a kidnap victim. Patty even said after that, “Did my mother say those words?” And I said, “No, I would have never been that tasteless.” But all my movies are based on some kind of twisted truth: something I saw, something I read about, something that happened to me, people I know. I’m always listening and watching and clipping and reading. I’m always interested in human behavior, and I think that’s what’s given me the nice career I’ve had.

NEW TIMES You mentioned in a taping of This Filthy World that you had this exercise: You read the newspaper and then you have a movie made by the end of the day, based on the headlines.

WATERS Why not? Certainly there’s always things in the news that could be turned into a movie that very day. The thing is, shooting it, editing it, and having people come home from work that night and see that it’s playing somewhere. That’s what really shocks them.

NEW TIMES How has your one-man show evolved?

NEW TIMES How about your upcoming show in Big Sur?

WATERS I’m really looking forward to it. My show, I’m writing it this morning. I’m always changing it, always updating it. It’s almost completely different than what was on the DVD. I talk about everything. I talk about show business, fashion, religion, terrorism, everything you would need to know to be a happy neurotic.

Arts Editor Anna Weltner has no mustache. Contact her at aweltner@newtimesslo.com.