Anatomy of a compost pile: Cultivating better home produce means getting your hands out of the dirt and into the soil

According to Nature’s Touch Harvest and Nursery Owner Melanie Blakenship, cultivating a quality compost heap is a lot like cooking lasagna: There’s a method to the madness, but no one-fits-all approach.

It’s an apt metaphor. Both activities require similar abilities: an iron will (you must leave your “dish” alone until it is fully cooked), physical labor (layering and layering), and remarkable self-control (if you dig in too early, you could make yourself sick).

The Templeton garden guru’s recipe for “Organic Hot Compost Lasagna” reads something like this: Combine a hefty sum of chicken manure, dried leaves and straw, green waste, and table scraps. Turn for weeks or months, depending on ingredients and weather. Test for optimal pathogen-killing temperature and wait some more. Then, and only then, may you spread the fine, dark soil over your raised vegetable bed. Reap the reward as fledgling tomato plants burst forth from the ground with exceptional vigor. Optional: Grin smugly as your neighbor—the one who uses chemical pesticides and fertilizers—comes up short.

If you want to know Blakenship’s “11 herbs and spices,” including the specific carbon-to-nitrogen ratio, optimal height, and suggested frequency of mixing needed to make your specific patch of earth flourish, you’ll need to attend her all-natural composting workshops. However, there are some quick-and-dirty tips a first-time composter can (and should) take to heart before taking on an at-home heap. First, let’s clear up the obvious.

“What is soil? We all have dirt, but so few of us are exposed to soil,” Blakenship said. “Soil has the nutrients and microorganisms that go into feeding your plants. Dirt does not produce food. Soil produces food, and compost produces soil.”

Next: Waste not, want not. 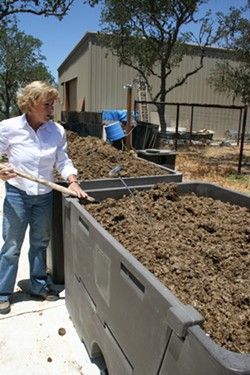 That means avoiding excessive packaging when possible, buying whole fruits and vegetables, purchasing produce direct from farmers markets, and redirecting your own kitchen scraps from the landfill to your backyard.

Aside from running Nature’s Touch nursery and market, Blakenship tends greenhouses and orchards as well as raises poultry, beef, goats, and pigs.

“Byproducts from my store go to feeding my animals, and that manure goes into my compost pile,” Blakenship said. “It’s about keeping the system going.”

Knowing what you’re composting is half the battle. That long-dead California Lilac you bought at Home Depot? It can certainly go in your pile, but remember: It was likely grown with the aid of chemical fertilizer, and all chemicals take time to break down. According to Blakenship, adding chemical fertilizers and pesticides to your heap defeats the purpose of nourishing your land and your body naturally.

“Chemical fertilizer is about making everything bigger, not healthier. I would love for anyone to test and trial a commercial chemical compost pile versus an organic compost pile, and watch how things break down,” Blakenship said. “In Nevada, I witnessed jet fuel contamination into dirt, and I witnessed it being composted and tested to the point where—eventually—there was no residual of the synthetic compounds. However, it took eight years for that to happen.”

Meat is another no-no. This isn’t vegan propaganda: You can blame the Central Coast’s temperate weather (Midwestern farmers, who receive a deep freeze, can get away with it just fine).

“We don’t get enough heat or air circulation on the Central Coast to really break meat down, so anything that eats protein, dog or human, should never go into a compost pile,” Blakenship said. “That’s when you start playing with different pathogens, viruses, and E. coli.”

Other forms of manure are a big yes. Chicken droppings increase water-holding capacity and add beneficial biota to the soil. Horse and cow manure—full of seeds and loosely-digested grasses—take far longer to break down, but will also add nitrogen.

“The true definition of compost is black, rich soil that has no musty, mildew, or manure smell,” Blakenship said. “Poop is not compost. You should never add raw manure to your plants.”

With a little research, Blakenship believes anyone can start their own at-home system. However, each heap is different.

“People always ask me what size bin they should use,” she said. “I can’t answer that because I don’t live with you. ‘How much waste do you produce?’ That is the basic fundamental issue.”

SLO County Worm Farm Owner Christy Christie is definitely on the high-end of compost needs. Her Paso Robles Farm boasts several automatically-aerating bins, filled with “browns” (she uses separated dairy solids courtesy of Cal Poly Ag Department) and “greens” (carbon-rich grass clippings). The bins periodically blow oxygen into the mix, which are measured for temperature daily. On a recent visit to her farm, I balked at the fact that the dial read more than 140 degrees Fahrenheit, with no added heat. It couldn’t have been more than in the high 70s outside.

“Weather has nothing to do with it,” Christie said. “That is the secret … it’s all about the carbon-to-nitrogen radio and biological activity. When you have the right combination, your compost will naturally get hot, and the bacteria and fungi thrive.”

In just a few weeks, the compost will shrink in size considerably, and the organic matter will then be piled into two-foot deep, 42-foot-long beds teaming with hundreds of thousands of Eisenia Fetida earthworms. The slimy helpers move through the soil, consuming microorganisms and leaving their poop—or “castings”—behind. It is this process that eventually leads to the production of Black Diamond Vermicompost, the bags of “black gold” Christie sells to area farmers large and small.

Christie said worms are naturally attracted to healthy soil. However, using vermicompost (or vermicompost tea) can be a nice “shortcut,” for those wanting all the benefits of casting-rich soil without the actual worm-whispering.

One look at Christie’s gargantuan kale and vigorous sunflowers (abuzz with very happy bees) confirmed that the proof is truly in the pudding. And by pudding I mean dirt. And by dirt I mean soil. Rich, dark, lustrous soil born from well-cultivated compost.

Hayley is still scrubbing the dirt from under her metallic silver gel manicure at hthomas@newtimesslo.com.