Veins grow like candy trees in Hope Kroll’s paper world. Flowers curve inquisitively from the necks of children. A human head is supported by a maze of antiquated, delicate machinery. 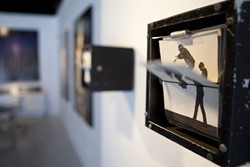 Kroll mines antiquated books for illustrations of surgical procedures, vintage photographs, and drawings of insects and birds, which she arranges in ever-creepier formations: From a child’s head flourishes a forest of lush flora and fauna in Remembrance, possibly a symbol of decay and regeneration, but just as easily evoking the fertile imaginative mindscape of the young. Three girls in white gowns convene among enormous sea anemones in Waiting Game, a work that, like the similar Symbolic Posturing, recalls the delirious, oddity-populated gardens of Hieronymus Bosch.

The oblong, featureless heads of Breton’s people in the five watercolor paintings included in the show have a sinister effect, thwarting the viewer’s desire for human recognition. Yet Breton maintains a knack for pointed, absurdist humor: “g2g on fire” texts one identical, business-suit-wearing, faceless being to another, upon being attacked by a triumvirate of wild animals with flamethrowers. “Me too lolz” responds the other.

In Breton’s Giraffe Shortener, a conveyer belt moves an assembly line of identical giraffes toward a machine resembling a wood chipper. His empty-faced characters serve up platefuls of abstract, angular shapes in What’s Good for Us.

Segurd’s bronze sculptures have been arranged, explained gallery owner Madeline Vale at a recent visit, to appear as though they were inquisitively padding toward the gallery entrance, greeting visitors with a mildly befuddled curiosity. The sculptures evoke otherworldly creatures, some with flowers for heads, many with flipper feet. Nevertheless, Segurd often endows his creations with qualities viewers instantly read as friendly or comical. Lippy but Prudent is a piece with a form vaguely evocative of a goose—belly protruding self-importantly, feet webbed—though the creature’s long neck leads to a head as flat and streamlined as a stingray, but with pouty, opinionated lips. It’s a bizarre but charming sight. 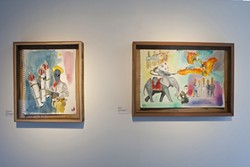 Wendy Marvel and boyfriend Mark Arnon Rosen’s wonderful mechanized flipbooks (analog animations from many black and white stills) mounted inside square boxes bring to life the simple, elegant motions of a waltzing couple and two figures leap-frogging in a continuous loop. But the coup d’état is easily a triptych called Water Girl, in which three such flipbook animations, carefully timed and placed, interact with one another to tell an irreverent little story.

In another vein entirely are Todd Carpenter’s grayscale oil paintings, in which there are no creatures, human or otherwise, to be seen. Instead, Carpenter paints highly photorealistic California landscapes. His eye for the way the light plays over hills, splinters through trees, or dully glows through a layer of fog is uncanny, especially rendered in black and white.

But Carpenter’s work stems not just from a desire to capture the pretty sights outside, but also from a curiosity about the internal world of his own mind. The artist holds a masters degree in neuroscience, and he uses his work to explore questions about the effects of light perception on the mind.

“How do we perceive depth?” he rhetorically asks in an artist’s statement. “What’s going on in my brain?”