His tanned hands are weathered and creased, like well-worn leather. He wears a dusty ball cap with a graying ponytail, and you can bet your boots he harbors an encyclopedic knowledge of the plants he’s grown, right down to the Latin names. Maybe you’ve seen him on bags of faro or millet, a bright cartoon face grinning from behind the wheel of a shiny red tractor. 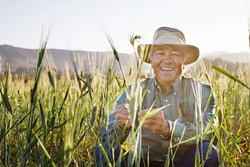 Underneath that caricature, there’s more to discover. Kandarian is a razor sharp mechanical engineer, an earthy intellectual, a curious tinkerer, and a rare witness to farming history. First and foremost, he is a defender of the ancient grains, seeds, and beans long forgotten by the standard American diet.

Long story short: Kandarian is a lot like the ancient crops he grows across 130-acres in Los Osos. At first pass, you might see a handful of quinoa. Look closer, and there’s a whole other universe tucked inside each tiny seed.

Raised on a small dairy farm in the California Valley, Kandarian learned how to work hard and make a buck.

“I’d take the cream check and put it toward buying more hay,” Kandarian said. “So, from the beginning, we were entrepreneurs. That’s something I wouldn’t have learned about if I had grown up in the city.”

Kandarian went on to study and receive degrees in agricultural and mechanical engineering at Fresno State University, chasing a passion to work with his hands to “solve the world’s problems.” He saw some of those problems firsthand when he joined the Army National Guard.

Vietnam was on, and although Kandarian never went overseas, he received a front-row seat to the Watts riots of 1965. Kandarian was tasked with defusing explosive racial tensions that had literally—and figuratively—set the city ablaze.

“I was in Watts on a hook and ladder truck with people shooting at me. I was 22,” Kandarian said. “I never realized people lived like that or could be that angry. And they were just people. It was terrible to see that.” 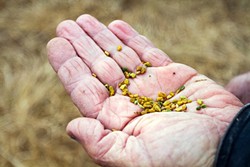 The farmer can proudly say that he knows how to “milk a cow and dodge a bullet,” but back then, his life was uncertain, and he didn’t know where his strengths would take him.

In 1970, Kandarian found out. He landed a gig working on government aerospace contracts as a mechanical engineer (the guy who sat next to him created the first moon rover). Kandarian had lofty goals, yet wasn’t one to climb the ladder.

“I had never been ‘a suit’ before, and there I was in a suit on the third floor. I’m from a farming background and had worked with my hands all my life, and now here I am with a union steward. I couldn’t even carry my own equipment,” Kandarian said.

Needless to say, the corporate life didn’t stick. When I asked Kandarian if he would have taken his chances flying in some of the contraptions being created by NASA and others at the time, he answered, emphatically, “no.”

And that’s exactly what Kandarian did. He went on to make an epic career for himself in the flower seed business, harnessing decades of farming know-how in fields across California. Today, the farmer is still growing flowers: He produces a range of gourmet pollens in Los Osos, including aromatic dill and fennel. All are harvested, cleaned, and dried by hand. Think you know these plants already? Try cooking with their pollen—it’s the flavor you know, only bigger and brighter. A little goes a long way.

Over more than 25 years of farming, Kandarian has come back to his roots. All 100 crops grown on his Los Osos farm—as well as the crops grown at a total of four neighboring farms he utilizes—are GMO free, certified organic, and sustainably grown.

“Some big folks have taken the ‘agriculture’ out of agriculture, and now it’s called ‘agribusiness,’” Kandarian said. “Now, we’re seeing a regressive trend; we are starting to get back to how it was when I was a child.”

“They grow in concert; they’re low profile and stay very flat, providing nitrogen to the soil,” Kandarian said. “It’s sort of like green manure. Some farmers might grow legumes, then turn them back into the soil before planting. I’m growing them at the same time as my crops.”

On much of the farmland Kandarian uses, these nitrogen-packed helpers are already growing naturally, thanks to other farmers that came long before. There’s nothing like viewing the coastal land covered in a pink and white streak of sweet clover flowers, backdropped by the green face of Irish Hills. In April, black barley will be ready for harvest, which will make way for even more beans: lentils, peas, and fava, to name a few.

Looking out at that view, it’s not hard to imagine the same land back in the 1800s, when Swiss and Italian dairy farmers occupied the region. Kandarian likes to remind folks that the milk would be processed at the Creamery in SLO or wagon-pulled out to Harmony.

“These immigrants were also growing grains,” Kandarian added. “They processed them in an old barn off Turri Road—which still stands today. They cleaned the seeds, then packed them in sacks, and sewed those sacks by hand with needle and thread. They would weigh 200 pounds, and men would lift those sacks on their backs. Those people don’t exist anymore.”

Well, that’s not exactly true. Kandarian packs and ships the crops with the help of a single partner, the multitalented Sara Popp, yet still manages to live pretty darn close to that old timey ideal. Somehow, the duo is managing to get these products out and onto the shelves of SLO Foods Cooperative, the kitchen at Luna Red, and beyond.

And why does Kandarian do it—all of this work? For the love of flavor, of course. Ancient grains like camelina and kamut aren’t just nutrient dense and rich in omega-3s and B vitamins, they’re delicious (there’s a host of recipes at the Kandarian Organics website). Along with superseeds like chia and flax and gluten free nude oats, Kandarian is offering a local, fresh alternative to processed meals.

“As we seek simpler, slower, healthier ways to eat, what’s old is new again,” Kandarian said, adding that he one day hopes to produce a form of einkorn wheat—one of the first plants to ever be domesticated by humans—that will rise as tall and fluffy as Wonder Bread. And yes, those with gluten intolerance would be invited to take that first, gloriously buttered bite.

Of course, there will always be naysayers. Kandarian pays them no mind.

“People tell me it’s too cool here to grow grains, and I say, ‘turn back the pages of history; it’s been done before.’ I’m not doing anything so unique—people have just forgotten,” Kandarian said.

Have you forgotten? Maybe. But your body might remember. Kandarian suggests giving an old throwback a try: perhaps a Mediterranean faro salad with local olive oil or herbed butter, or Peruvian purple quinoa with fennel pollen sprinkled on top. History is right there for the taking, if you only take a moment to really look.

If you want to reach the farmer himself, good luck. If he’s not in the field, he’s hand-sorting bags of ancient goodness. My advice? Follow the dirt. That’s where he’ll likely be.

“What’s happening under the ground is very kaleidoscopic,” Kandarian said. “There’s all these fragmented bits that—if you look at ’em a certain way—you show you a pretty unbelievable picture.”

Hayley Thomas hopes the past will repeat itself when it comes to ancient grains, beans, and superseeds. She can be reached at hthomas@newtimesslo.com.