Ancient oils: Morro Bay's Poppy Products keeps the chemicals out of their skincare

Bathe yourself in milk and honey, scrub yourself with sea salt, and throw some aloe vera and rose water on that pretty face of yours if you want to achieve the beauty of Cleopatra. Rumor has it the Egyptian queen was obsessed with maintaining her youthful skin, creating her own regimens and products with what was available at the time. 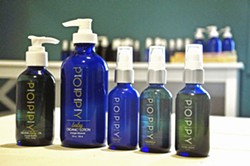 No preservatives. No chemicals. Just a whole lot of natural (and probably organic) ingredients. Rose, myrrh, frankincense, neroli (orange blossom), sandalwood, almond: These essential oils have been used for centuries to beautify, tighten, tone, and clarify the skin—and they smell good, too.

Poppy Rhys, owner of the Morro Bay-based beauty company Poppy Products, said she loves it when you can trace a name back to ancient times. She points out helichrysum as an example. Lauded for its restorative and hydrating properties, the little yellow flower that's native to the Mediterranean also goes by names like "everlasting" and "immortelle." Rhys named her anti-aging serum Immortelle in homage to the flower's essential oil, which is one of its key ingredients alongside argan, frankincense, sandalwood, myrrh, lavender, and jasmine essential oils.

"These herbs are ancient, holy herbs," Rhys said. "They've been considered as precious as gold for a long time."

Yes, everyone, society's quest for youth is an ancient tradition that continues today, only the ingredients have changed. And those ingredients don't necessarily make it to the label of that facial moisturizer you picked up at the drug store. The Food and Drug Administration doesn't regulate the cosmetics industry, either. So you never really know what you're putting on your skin—the largest organ on the human body, Rhys noted.

That's one of the reasons Rhys started crafting her own cosmetic concoctions. She's mixed oils for beauty since she was 15 years old, when she started selling homemade rosewater on the side of the road in her hometown of Cayucos. As she got older, she followed her passion into dermatology before eventually studying with an apothecarist in Switzerland and taking the path to becoming an aesthetician, giving facials for a local spa before opening her own place.

However, she didn't like the chemicals she was using to cleanse, exfoliate, and invigorate people's faces.

"When I first started doing facials, I got chemical conjunctivitis in one of my eyes," she said. "I was doing eight facials a day and seeing what it was doing for skin."

Then, while attending the University of Aesthetics in Los Angeles (and driving down there three days a week with a 1-year-old at home), she started to really understand the chemistry that went into creating a product formula. She purchased a bottle of "organic," "all natural" shea butter baby lotion for her daughter and looked over the ingredient list, thinking to herself that there was no way that the lotion would have a long shelf life with what was noted on the label.

So she called the company and talked them into letting her speak with the chemist, who gave her the name of the chemical that didn't make the list.

"I was just protective of my first daughter, and I didn't want to be rubbing this chemical all over her baby skin," Rhys said.

The kitchen became her lab, and she began to mix and match. It took a lot of trial and error, she said, but eventually she pushed out all of the products that were on her spa's shelves and stocked them with her creations, using them in the facials she gave. Her customers started asking to purchase bottles and take them home. And about three years ago, she switched gears, focusing completely on selling and making Poppy beauty products.

And the ingredient list is definitely not a fantasy. Δ