And the art goes on: Studios on the Park exhibit explores ages of art

The circle of life stops for no man. The earth keeps on spinning round and round, each sunrise bleeds into the following sunset, and the art of the day continues changing with the passage of time.

Looking to the ever-evolving inspiration, style, and subject matter of art, the Paso Robles Art Association settled on the theme of Ages of Art for its show that’s currently on display at Studios on the Park.

“The whole idea of the show was to be a cross of not just doing really cool art, but of the different ages of art,” Deprise Brescia, vice president of the association and exhibit curator, said. “Where inspiration from modern day art comes from. It’s meant to be educational and inspiring.”

The exhibit, which aims to showcase the creative spirit from the many ages of art and from all corners of our world, features more than 100 pieces from artists of all ages (the youngest is just 7 years old). The 70 pieces of youth art are featured together, unframed on one wall. The roughly 37 pieces of art submitted by adult artists runs the gamut of ancient encaustic art, death masks, modern technological masterpieces like 3-D dragons, and everything in between. Pieces in the show by adult artists are for sale and range from $100 to $7,000.

Linda Grone Smith, whose piece Shadow Self placed first in the show, said she likes to focus on the story behind the art. Shadow Self is an acrylic painting of an angelic looking woman wearing a shimmering white choir robe, arms crossed over her chest. A lone black wolf lurks in the background, waiting to strike. 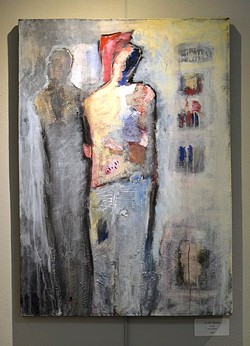 “The concept for the shadow self is something most people deny and push back, but it’s thought to run things or pull the strings in a subtle way,” Grone said. “Even if you don’t want it to, it does run things.”

Shadows are mysterious, tricky beings. But is it better to unknowingly be preyed upon by a shadow or be fully aware that you’re in its grasp?

In His Shadow is an acrylic mixed media piece by Jewel DeMoss that placed second in the show. It features two abstract figures. Pieces of paper from a financial portfolio spill out of a man’s pocket. Slumped behind him is the less vibrant figure of a seemingly powerless woman.

“For this piece what I wanted to do is bring out a piece of life,” DeMoss said. “We’ve all been in a situation where we’ve been with a man who is controlling of the finances.”

Ages of Art will be on display at Studios on the Park through April 3. Exhibit curator Brescia said the variety in the show should be attractive to people of all artistic tastes.

“It’s not only an inspiring show because you have such a huge range of artists age wise,” Brescia said, “but it’s interesting to see all the different takes people had and where they drew inspiration from.”

Ryah Cooley is going through a teal phase at rcooley@newtimesslo.com.