And the King Vidor Award goes to ...

At the SLOIFF, John Hawkes gets a lifetime achievement award (and I get over my stage fright)

So it’s 6:35ish on Saturday, March 10, and I’m walking into the Fremont Theatre in downtown San Luis Obispo, where the San Luis Obispo International Film Festival will present the Independent Spirit Awards to the festival’s finest selections, and the King Vidor Award to actor John Hawkes. I hope I’m not late! 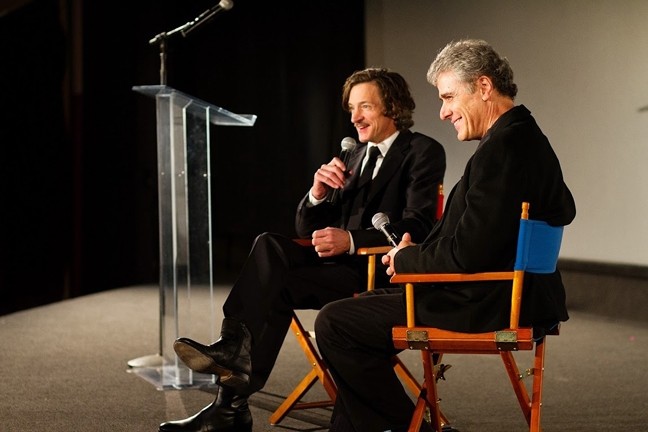 I take a seat near the front of the theater, my mind brimming with questions. Should I have checked in somewhere? Should I have prepared something amusing to say? Am I sitting in the right spot? Is velour really back in style?

Then I see Wendy Eidson, the festival’s executive director.

“There you are,” she says, handing me a folded piece of paper. I open it.

“And now,” it reads, “I would like to present the award for Best Short Film (wait three seconds) to Behind the Mirrors, directed by Julio O. Ramos.”

OK. I can do this. Wait, what if I forget how to talk? How long is three seconds? How will I know what to do with my arms?

“It’s just like at the Oscars,” Eidson assures me.

I glance across the aisle. Say, there’s Sarah Linn, The Tribune’s arts and entertainment writer. She has a slip of paper just like mine. She’s making so many notes on hers! Should I be making notes on mine, too? Psh, no. I’ll wing it! Shit. She’s writing a lot.

Then the music starts, and the event is under way. Guests are welcomed. Sponsors are thanked. Then it’s on to the awards! Best Student Film goes to First in Flight, Brandon Hess’ wonderful short about the Wright brothers. A special jury prize is awarded to Green Acres, an animated short by James Beck. Then it’s my turn to present! The lights are really bright up there. Some words come out of my mouth, and then Julio O. Ramos comes onstage and accepts the award—which, I notice for the first time, is in the shape of a clapboard.

Boy, am I glad that’s over! Now I can relax and enjoy the rest of the awards ceremony. Alonso Mayo’s The Story of Luke and Eric Kissack’s Missed Connections tie for best narrative feature. Best Documentary goes to Frieda Mock’s G-Dog.

At intermission I am complimented on my velour dress: “It must be comfortable.” Damn right.

Back in the theater, the excitement is palpable. John Hawkes, who starred in The Sessions, Lincoln, and Martha Marcy May Marlene—each role thoroughly unrecognizable from the last one—is about to be presented with the King Vidor Lifetime Achievement Award. James Cromwell couldn’t make it, so Palm Theatre owner and SLOIFF co-founder Jim Dee fills in as presenter. Dee starts by admitting he’s a huge fan, citing Hawkes’ performance as Sol Star on Deadwood and in indie films like Me and You and Everyone We Know.

The screen is black for a while. Then a clip starts to play, but without sound. It pauses. It goes black again. Someone cheers ironically.

“They have the same problem every year,” mutters a woman in the row behind me. “Every year!”

It’s true. I have yet to attend a King Vidor event without technical difficulties. But after a moment of confusion, the clip, a compilation of Hawkes’ work, plays—with sound! There’s a round of relieved applause.

When the lights go up, the man of the hour is introduced. Hawkes, dressed in a sharp suit, slight of build, his hair long and slightly unruly, walks on stage to a standing ovation.

After spending a few moments balancing his gold trophy on the podium with care, Hawkes begins his acceptance speech with a quote by Beat poet Kenneth Rexroth: “Against the ruin of the world, there is only one defense: the creative act.”

“This is the first, and hopefully not last, career achievement award that I have ever been given,” Hawkes continues. “… It’s a little daunting, it’s a little humbling, because in a lot of ways I feel like I’m just getting started. … I don’t know if necessarily the body of work that I’ve done really deserves this, but I want to continue to do work as long as I live that will shine a great light on this, and justify your kindness in giving it to me tonight. So thank you.”

In an interview with Dee (who does not rely upon notes at all—impressive!), Hawkes is humble, eloquent, and witty. He recalls the first moment he experienced the power of the theater:

“When I was in 10th grade in a small town in Minnesota, I was herded on to a bus to go 150 miles southeast to Minneapolis, to the Guthrie Theater. It was Arthur Miller’s The Crucible, and it changed my life. I didn’t know that I could be an actor, but I felt my eyes were opened in a way that they hadn’t been before.”

Hawkes never received any formal training as an actor, he said, and learned instead by becoming involved with an Austin, Texas, theater company for nearly 10 years. Following his performance in Debra Granik’s Winter’s Bone, he says, he began receiving lots of scripts to read, some of them for big-budget films.

“I ended up picking the lowest-budget film in the stack,” he says, “and that was The Sessions.”

Then Dee invites questions from the audience. One woman asks Hawkes how he kept a straight face while filming some of the more the intimate and awkward scenes of The Sessions, a film about a man in an iron lung who decides to lose his virginity with the help of a sex surrogate, played by Helen Hunt.

“I was in a fair amount of pain, actually,” Hawkes replies. “It’s mentioned a couple of times in the script that Mark’s spine is curved horribly … so as an actor, I can’t just disregard that, I have to figure out a way to approximate Mark O’Brien’s horrible scoliosis. The props department helped me design a piece of hard foam that I put under the left side of my back to give me that curve, so I wasn’t in a real laughy mood.”

Another question: How much research went into the role of cult leader Patrick in Martha Marcy May Marlene? Not much, Hawkes says.

“I wanted the character of Patrick to be such a cipher. … I didn’t make up a backstory for him, which I always do,” he explains. “I just wanted him to be this kind of—pure is the wrong word, but this human being who I didn’t attach really anything to.”

How about working with David Milch on Deadwood?

“Before every scene he shot,” Hawkes recalls, “David would come in, and sometimes he would quote a John Milton poem. Or he might tell a story of, in his younger, more restless days, trying to sue an Atlantic City casino by slipping on some ice. I mean, just all kinds of strange stories. … You’d listen to the story of the poem or whatever, and suddenly the scene would make sense to you in a way that it hadn’t, or completely throw you off what you thought it was about. I’ve heard reporters calling it ‘Milching it.’”

Arts Editor Anna Weltner likes to Weltner it. Contact her at aweltner@newtimesslo.com.