And they're off! The first major 24th District congressional debate sees wide array of issues, ideologies, and approaches

From here, it can only get more interesting.

“You can expect a vibrant and lively conversation, I’m sure,” White said in his introduction.

Individual candidates separated themselves from the pack with a mix of political talking points, bold statements, and a little bit of outside-the-box comments or theatrical maneuvers. The crowd responded in kind. 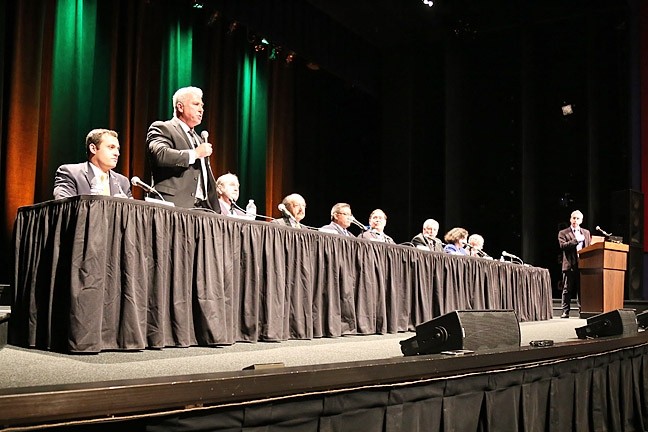 The seat will be vacant for the first time in close to two decades after Congresswoman Lois Capps announced 10 months ago that she would retire at the end of her term. That news sparked early activity among some of the race’s front-runners as they gear up for what is expected to be a hotly contested, expensive fight for a seat coveted by both major parties.

All nine candidates currently running an active campaign for the seat participated. The deadline to file for this race is March 16, which leaves time for new candidates to enter.

The debate’s first couple of rounds were civil as candidates introduced themselves and answered the first question asking about issues in higher education. Each candidate offered their two cents on the issue, generally focusing on student debt and how college functioned within the greater society.

Uebersax said he founded Californians for Higher Education Reform, a think tank that works to make higher education debt free; Kokkonen said education needs to be relevant to workforce opportunities and that the federal government should stay out of state college systems; and Isakson said he’d like to see expanded support services, like the forgiving of student debt for people who become teachers, doctors, or the like in low-income or rural areas.

Schneider addressed the issue of student loans, saying, “Wall Street and big banks should not have better loan opportunities than students.”

She then took the opportunity to draw from one of her stump issues—women’s rights and gender equality—to say that she’d like to see California’s SB 695, the “yes means yes” law requiring affirmative consent, broadened across the national.

“There’s another big issue that we need to take care of—and a very important one—and that is to stop the epidemic of sexual assault and rape that happens on college campuses,” Schneider said.

Uebersax, who repeatedly lobbied for peace and said that war was plaguing America, gave one of his oft-delivered more philosophical answers.

“It doesn’t matter how much we charge for tuition if the education is negligent,” he said. “We’re not truly preparing people to become good students, we’re training them to be economic units.”

Carbajal said he considered the two most pressing challenges to students to be accessibility and affordability and that he supports a current initiative by President Barack Obama that would make community college free.

“That is the gateway to higher education for so many people,” Carbajal said. He also advocated for expanded financial aid and student debt relief. “It’s ridiculous that you can refinance your mortgage but you can’t refinance your debt.”

Fareed, who closed out that round, was the first to go on the attack in the debate when he threw a subtle jab at Carbajal. The two lead the field with the most funds raised and are both accruing high-profile endorsements.

First, Fareed said he was a proponent of tax reform, then he addressed Carbajal.

“The supervisor mentioned that he wants to make college free,” Fareed said. “I think there’s a false notion that the federal government encourages all people to go to college and incur more debt. I think instead what we need to have is incentives for folks to save and invest, so they can invest in their future.”

Ostrander responded: “Nobody’s really said how we’re going to pay for this,” he said, pitching a 0.2 percent tax on Wall Street, which he said could raise almost $300 billion.

Oshins, whose stump issue is battling student debt, then jumped in, asking Fareed and the other Republic candidates if they were going to sign on to the “no tax” pledge pushed by Grover Norquist, the controversial founder and president of Americans for Tax Reform.

White attempted to relay that question to the Republican candidates, before Achadjian brushed it off, asking White, “Are we going to stick to the questions we have, or … ?”

That call to order resonated with the crowd, and onward the debate went. Then came a hot question on national strategies for economic growth and prosperity.

Fareed was first to answer and stuck
to his themes of the night, focusing on how politicians in Washington aren’t working for the people and how government is too big.

“The folks we keep sending to Washington are more concerned about adding to our debt than they are with reducing the bloated size of government,” Fareed said. “This is a significant issue. We must work together to promote more economic certainty and economic freedom for our families and businesses here on the Central Coast.”

Ostrander responded: “Well that is the Republican playbook that we’ve heard for the last 35 years, and it hasn’t worked very well, has it?”

With the exception of Fareed, the front-runners Achadjian, Carbajal, and Schneider were generally more reserved and focused on key issues, while the underdogs didn’t shy away from shaking up the conversation and calling out their competitors.

The audience—many of whom were students—was not shy about giving responses in the forms of claps, laughs, boos, or occasional disruptive comments from both sides of the political spectrum.

Audience response flared up during a heated conversation about the Affordable Care Act. A number of the candidates locked horns on the issue, attacking everything from the cost of medicine to the government’s role in managing health insurance. Kokkonen, an avid opponent of the legislation, questioned if there was even a need for the program.

“We have the best medical care in the world, and I value that,” Kokkonen said, after which he received several “boos” from the audience.

During a rough debate on partisan polarization, Achadjian curried a bit of favor from the audience when he pulled out a framed “Shepherd of Consensus Award” from The Tribune.

“I am a consensus builder,” he said during closing comments. “I am fair, I am both public and private sector, and I am prepared for the job.”

Perhaps the most colorful and unorthodox comments came from Oshins—whose phone started ringing while he was answering a question. He has staffed a congressional committee and said that he was the only one there who has ever actually passed legislation, despite the fact that Achadjian has served as a state legislator for two terms and has authored several bills.

When it came to partisan gridlock and obstructionism in Washington, D.C., Oshins made it clear that he isn’t afraid to hold his ground.

“These people that are just warriors, and have the warrior mentality, I’ll fight the sons of bitches, I don’t care, I’ll call them out,” he said. “I’ll say, ‘You’re a goddamn idiot. Go home.’”