Perhaps you saw the 2010 biopic about autistic animal scientist Temple Grandin, whose affliction allowed her to see patterns in cattle behavior that led her to design a less stressful slaughter system for processing beef.

Come on! Making fun of Stevie, Helen, and Temple to make a point about our murderous, animal slaughtering meatfest ways? That’s cruel and unusual punishment, but the band is barely getting started.

Take the uplifting little ditty “Jesus Saves”: “There will come a day when our cells won’t regenerate/ and everyone you know will rot away, rot away/ Your friends and enemies and all your family/ we will all be buried in the ground, in the ground/ So make the most of it/ Life’s too short to fuck with// They say that Jesus saves but Jesus doesn’t care/ because he is in a grave, in a grave/ Let’s be our own God, take care of ourselves and the ones that we love.”

Jean Paul Sartre and Albert Camus would be so proud! Embrace your inner existentialist, friends! Of course, the band does have a dark side.

In “Fucc the Devil,” Bonnette sings, “I’m gonna fuck the devil in his mouth./ I just need to listen to my sickness so I can learn how/ And then train for a couple weeks until I have the skills I need./ The flask isn’t alcohol, it’s a paintbrush./ The flask isn’t alcohol, it’s a toothbrush./ I need to go throw up now./ I want to be the queen of belly rubs now./ I’m gonna quit my job cus I’ve got another job/ And I don’t need to work two jobs./ I guess you could call me lucky./ I need to confront my own weakness./ Some days I feel like I’m the weakest and others the strongest./ These days are the longest and I’ve got the weirdest feeling/ About this and I wanna go away for a while./ Because the things that I have seen are turning me into a shitty human/ Being.”

Bonnette, the band’s lyricist, reportedly volunteered at a suicide prevention hotline for teenagers for eight years and worked with homeless men and women in the Phoenix area, giving him a rather bleak outlook on life.
Basically, his message seems to be that everything about America is wrong. Mind you, this is all framed in these string-driven, upbeat folk-punk tunes with Bonnette’s cheerful, slightly off-kilter voice. They’re not for everybody, but I sort of love Andrew Jackson Jihad because somewhere deep inside, there’s hope. The Smith Street Band will open the show.

Also at SLO Brew this week, check out reggae act Bare Feet on

“Yeah! I’ll be opening for her and possibly playing along with her on her set … will see,” Bernardy said. “Also, I have an art show coming up at Steynberg Gallery in May along with Suzi Bliss.”

Vincent is a Renaissance man, man, and before he goes on tour with Rumer, he’s hosting a music event this Friday, April 3, at SLO Tracks, the sort-of-secret venue off of Highway 227 near Buckley Road, across from the SLO Airport and Fire Department. Take Farmhouse Lane then look for SLO Tracks Shuttle Sign. Park and shuttle to the show.

Australian native Kara Grainger plays a mean slide guitar and delivers soulful R&B, the product of growing up in Balmain, “renowned for its artistic Bohemian community, rich nightlife, and live music scene,” according to her press materials. By 16, she’d formed the band Papa Lips with her brother Mitch, making two albums and touring all over Australia in the late ’90s.

In 2007, she signed with Australian label Craving Records and recorded her debut solo album Grand and Green River, which made the Americana charts. Now living in Los Angeles, she’s released two more CDs: LA Blues in 2011 as homage to her biggest inspirations; and Shiver and Sigh in 2013, which sounds like early Bonnie Raitt (maybe because Bonnie’s band members played on it).

She’s performed all over the world, from the European festival circuit to the Himalayan Blues Foundation in northern India to the Jakarta International Blues Festival, sharing the stage with the likes of Buddy Guy, Tal Mahal, and Jonny Lang.

This Saturday, April 4, Kara and her band—Matty Algers (drums), Spencer Wright (bass), and John Thomas (Hammond, keys)—play the next SLO Blues Society show at the SLO Vets Hall (8 p.m.; 21-and-older; $25 at the door or in advance at Boo Boo Records), with Guy Budd and the Gypsy Souls with Inga Swearingen opening.

Painted Sky Concert series hosts the lovely and ethereal folk pop stylings of Shadowlands this Friday, April 3, at 8 p.m. Their debut album was recently released, and it’s filled with gorgeous melodies, thoughtful and poetic lyrics, and deep emotions provided by the varied voices of the quartet’s three chief songwriters (Mark Davis on guitar, Karoline Hausted on piano, and Wendy Liepman on guitar) and the hauntingly beautiful musicianship of all four members including cellist Bob Liepman. The three songwriters sing beautifully together, and the band’s show is spellbinding. Tickets are $18 (at Cambria Music Box Shoppe, Boo Boo Records, or by calling 927-8330). If not sold out, tickets will be available at the door.

The star of the Dirty Cello show is definitely Rebecca Roudman frantically sawing away on her instrument as she’s backed by a string band and light percussion (one video online uses a typewriter for clacking out the beat). The San Francisco band plays two SLOfolks shows this week: Friday, April 3, at Coalesce Bookstore (7 p.m.; $20; call 772-2880 but it’s almost sold out); and Saturday, April 4, at Castoro Cellars (7:30 p.m.; $20 call 239-0725). Roudman’s virtuosic cello work will take you on a “wild tour of up-tempo music featuring down-home blues, Eastern-European dance music, a bit of bluegrass, and some classic rock.”

Little Black Train returns to the Red Barn Community Music Series this Saturday, April 4 (5 p.m. potluck; 6 p.m. show; all ages; $15 at the door). This local bluegrass-roots trio features Kenny Blackwell (mandolin and guitar), John Weed (fiddle), and Stuart Mason (guitar, banjo, and mandola), and the show will feature a sneak preview of Stuart’s new solo album, Tradition, to be released in May. The album features public domain songs of yesteryear. “From Depression-era gospel and blues to Appalachian and Celtic dance tunes, the band digs up the roots of bluegrass that traveled to America from Ireland and Scotland in the 19th century,” according to their bio. This is a terrific bunch of musicians who will put on a great show in a cozy venue!

Ynana Rose headlines the Songwriters at Play showcase this Monday, April 6, at Bang the Drum Brewery (6:30 p.m.; all ages; free). The veteran performer draws inspiration from Emmylou Harris, Dolly Parton, Sarah Jarosz, Corinne West, and more; blending elements of folk, bluegrass, country, blues, and jazz. When her debut solo album came out last year, I was amazed by her diversity, easy style, and seductive voice. Kenny Blackwell on mandolin and Dylan Johnson on bass will accompany her. Other performers include Tim Jackson, Rowan McGuire, and Maria Woodson. Visit songwritersatplay.com for a complete listing of this week’s shows. 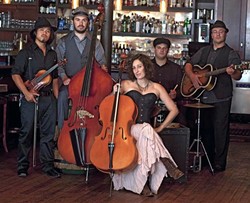 If you’re like me and you only saw the Meryl Streep film version, here’s your chance to see the ABBA-song-festooned musical Mamma Mia! the way it was meant to be seen and the way it has been seen by more than 54 million people worldwide—live and in person! On Monday, April 6, in the Performing Arts Center (7:30 p.m.; $60 to $90 tickets available at 756-4849 or online at calpolyarts.org), see the ninth-longest-running show in Broadway history! A free pre-show lecture will be led by PCPA’s Erik Stein at 6:30 p.m. in the PAC Pavilion.

It’s a week out, but classical music fans will want to mark their calendars for the St. Lawrence String Quartet playing Thursday, April 9, at Cal Poly’s Spanos Theatre (7:30 p.m.; student and adult tickets for $36 and $45 respectively, at 756-4849 or online at calpolyarts.org). This world-class chamber ensemble will perform their innovative “Haydn Discovery Session”—a deep exploration of the composer’s famed string quartets. Said violinist Geoff Nuttall, “Haydn is the ultimate rock star for me. He uses music to express human stuff—emotion, joy, humor. For me, his music is so visceral and so ‘gettable.’ It makes the hair on the back of your neck stand up. That’s what I want people to feel.” Expect to hear String Quartet in Eb-Major, Op. 33, No. 2 (Hob.III.38) “The Joke” and String Quartet in C major, Op. 76, No. 3 “Emperor.” ∆