Animal Liberation Orchestra will coax your spirit animal onto the dance floor on Feb. 25 at SLO Brew

According to ALO (Animal Liberation Orchestra), everyone’s got an animal inside of him or her, and getting crazy on the dance floor is how you liberate your inner animal.

If you’ve never heard the band, they capture a certain brand of breezy, California-style beach bonfire hootenanny sounds with a little funk thrown in.

They certainly share some similarities with Jack Johnson, who signed the band to his Brushfire Records label with label mates Matt Costa, G Love, Neil Halstead, Release the Sunbird, and Bahamas. Subsequently, ALO toured and collaborated with Johnson extensively. In fact, one of their best-known songs, “Girl, I Want to Lay You Down,” they’ve performed with Johnson repeatedly, and Johnson recorded it on one of his albums as well.

“I come over early in the morning, just like a heat wave, without warning. And when I touch you my heart begins to flutter ’cause you’re smooth and creamy like peanut butter. Girl I wanna lay you down. I said, girl, I want to lay you down. I’m gonna flood you, like a love river. Awe baby, the postman is about to deliver. Cook you up some dinner, a little pasta, listen to some music, a little rasta.”

You get the idea.

The band’s newest album, Sounds Like This, delivers more of the band’s “always-kaleidoscopic funk pop ’n’ roll,” as they describe their sound.

They’re certainly adroit at playing, recording, and performing together, having spent more than two decades learning the ins and outs of one another’s music sensibilities. They’ve also grown into philanthropists of sorts, playing their annual Tour d’Amour to benefit public music school programs.

“Each year, a portion of the proceeds from Tour d’Amour are donated to nonprofit organizations who work to bring music to children. Money raised from this tour will benefit the Creative Arts Charter School in San Francisco. The organization provides hands-on, arts-integrated public education to primary and middle school students in the San Francisco Unified School District,” according to the band.

Don’t miss your chance to see ALO and release your inner animal! T Sisters will open the show.

Of course, SLO Brew has a whole mess of other shows lined up this week, starting this Friday, Feb. 20, with Night Riots (7 p.m.; all ages; $5 presale or $15 at the door). Rolling Stone magazine anointed them “One of the top 16 unsigned bands in the North America,” MTV has aired the singles “Some Nights” and “Chase the Sky,” and MTV Buzzworthy called Night Riots “One of the most critically overlooked bands of 2012.”

It’s three years later and they’re still overlooked, but they’ve got too much talent and drive to quit, and I’m still waiting for this SLO County band to bust out and reach their full potential. “We’ve been friends since high school; the guys and I grew up in a small coastal Californian town with only one street light,” said vocalist Travis Hawley about band mates Nick Fotinakes (guitar), Mikel van Kranenburg (bass), Matt DePauw (guitar), and Rico Rodriguez (drums). I still have faith! Dear Boy and  Armors will open the show.

Gregory Alan Isakov plays Saturday, Feb. 21 (7 p.m.; all ages), but this show is already sold out.

There’re still tickets for Ozomatli playing Sunday, Feb. 22 (7 p.m.; 21-and-older; $25 presale or $27 at the door), and these guys put on an awesome L.A.-style street party of a show. “In their 18 years together as a band, celebrated Los Angeles culture-mashers Ozomatli have gone from hometown heroes to being named U.S. State Department Cultural Ambassadors,” according to their press materials. The band mashes-up urban-Latin, hip-hop, salsa, dancehall, cumbia, samba, funk, merengue, comparsa, New Orleans second line, Jamaican raga, and Indian raga, and more. In other words, there are no words to specifically explain the band’s genre jumping style. NeW bEAt FUNd opens.

Putting the ‘sass’ in classical!

It’s no small thing for Café Musique to work up new songs. They’re perfectionists, for one, and they already have such an amazing oeuvre that they’re not going to add in new material that’s unworthy of their old stuff. So when accordionist Duane Inglish told me about two upcoming shows with this promise—“We’ve a bunch of new tunes that we’re going to let loose”—I swooned a little. 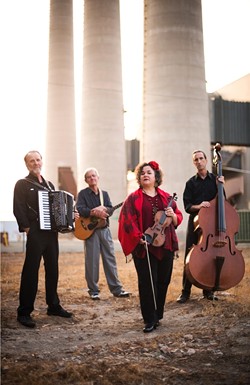 The group mixes gypsy jazz and wild classical sounds into a sublime musical experience that never fails to surprise me. All four core members are master musicians, and they all like to have fun. Ever since the loss of one member, they’ve worked with various guest performers, and these two shows are no different.

Brynn Albanese will be on violin and vocals, Inglish on accordion, Fred Murray on bass and vocals, Craig Nuttycombe on vocals and guitar, plus guest star Eric Williams on vocals and assorted stringed instruments.

“I’m really excited that my girl band is running on all cylinders and is shaping up to be a really fine piece of machinery!” said my pal Shea. “We played Mongo’s last weekend, and local guru, Gene Baker, said this: ‘Hot Tina freakin’ rocks! These ladies served up a stew of The Runaways meets Sabbath/Ramones, Queens of the Stone Age, yet all original, extremely cool, great tones, vocals, Roc-Queens! You must check these gals out. They’re gonna school ya.’”

Gene knows his stuff, so the smart money is on Hot Tina and Nudity playing this Thursday, Feb. 19, at SLO Creative Studio (3536 S. Higuera, Suite 210) from 7 to 9 p.m. for just $5. “Nudity is on tour from Olympia, and member Dave Harvey grew up here,” Shea said. This show is all ages, kiddos! On Friday, Feb. 20, Hot Tina plays with Black Sabbitch (L.A.), The Carnies, and Yawn Out at Sweet Springs at 9 p.m. Get your rocks off!

Songwriters at Play showcases have a whole mess o’ music this week starting with Aaron Porter on Thursday, Feb. 19, at Shell Café (6:30 p.m.). This dude loves music, the camaraderie of it, the creativity, and collaboration, and he’s got two albums worth of original material to draw from. Keith Cox and Rachael Kauffman will also perform. The Wicked Saints play Sunday, Feb. 22, at Sculpterra (1 p.m.). They’ll deliver Americana, swampy New Orleans grooves, reggae, pop, and blues, with Ynana Rose, Michele Kappel-Stone, Stephanie Croff, Ragged Company, and Martin Paris also performing. And on Monday, Feb. 23, at Bang the Drum Brewery, check out Greg “Spanky” Baldwin (6:30 p.m.) and his down-home originals, with performances by Erin Montgomery, Che Miller of the Mother Corn Shuckers, Just Gravy, and the new duo called Chasing Audrie. All shows are free!

The little trio that could, Fish Out of Water, returns this week for the first time in almost a year. These guys are living the dream, touring the world and taking their music everywhere you wish you were on vacation. They’ve taken their combination of rock, funk, reggae, and hip-hop on six national tours and three tours of Australia, and after a few local dates, they’re off to Norway. See them this week on Friday, Feb. 20, at SLO’s Tap It Brewery from 5 to 8 p.m.; and Saturday, Feb. 21, in Paso’s Downtown Brewery from 9 p.m. to close.

Central Coast hula group Hoapili Pomaika’I Aloha will host award-winning slack key guitarist Patrick Landeza this Saturday, Feb. 21, at La Perla del Mar Chapel (7 p.m.; all ages; $20; call 878-6793). Landeza is the first non-resident of Hawaii to win the prestigious Na Hoku Hanohano award. “Born and raised in Berkeley to Hawaii-born parents, Landeza learned ki’hoalo from the best and became a protégé of Hawaiian slack key masters,” according to press materials. “Today, Patrick is a new voice in Hawaiian music and a huge part of the continuation of the slack key tradition.”

As a kid, I saw plenty of Elvis Presley on TV in concert specials or his numerous movies, but I never saw The King perform live and in person, and I never will, but maybe, just maybe, the Clark Center for the Performing Arts’ Tribute to The King of Rock and Roll this Saturday, Feb. 21 (8 p.m.; all ages; 489-9444 or clarkcenter.org for tickets), will be the closest I’ll ever come. CNN gushed, “The closest they can get to Elvis in the flesh busting out ‘Shake, Rattle & Roll’ is Scot Bruce.” Elvis fans, you’ve been warned!