Blast from the Past: Bill and Ted's Excellent Adventure 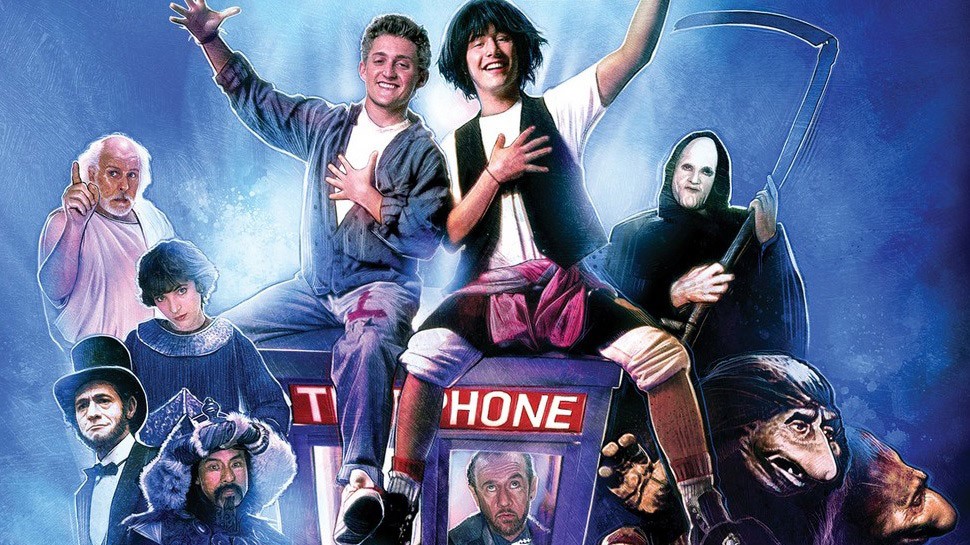 Considering Keanu Reeves' recent trip to the Central Coast to film his upcoming movie, Destination Wedding, now seems like a most excellent time to revisit one of his classics. However, if you prefer his more serious works like The Matrix or John Wick, this is not the review for you, because this Blast from the Past column is about the one with actual blasts from the past. That's right, I'm going to talk about my favorite Reeves movie, Bill and Ted's Excellent Adventure.

The movie follows high school slackers Bill Preston (Alex Winter) and Ted Logan (Reeves), who are best friends that dream of forming a band together. This dream becomes at risk when Ted's strict father (Hal Landon Jr.) threatens to send Ted to military school unless he passes history class. What they don't know is that in the future, Bill and Ted's music will be essential to peace and harmony, so a time traveler named Rufus (George Carlin) is sent back to ensure that the boys get an A-plus on their final history report, and thus aren't separated. And how do they pull off this A-plus? Why, by traveling through time and kidnapping various historical figures, of course!

There's a reason this movie has a cult following and a sequel (Bill and Ted's Bogus Journey, 1991), with rumors of another sequel in the works. It's hilarious throughout, super quotable, and brilliantly casted. Winter and Reeves make Bill and Ted so likable and relatable that you can't help but root for them even though their band doesn't even know how to play yet, and it's no wonder they're failing school when they do things like mistake Joan of Arc for Noah's wife.

Despite being nearly three decades old, this movie still holds up pretty well. There is one scene where a homophobic slur is dropped after Bill and Ted briefly hug, which no doubt wouldn't fly in a movie made today, but everything else that would make any other movie feel outdated— namely, the soundtrack, fashion choices, and slang used—instead come off as simply parts of Bill and Ted's personalities. While it's rare to hear phrases such as "bodacious" or "most triumphant" in dialogue today, the two goofball protagonists would be very different, much less quotable people without their distinctive vocabularies.

If you somehow have been living under a totally bogus rock and have never seen Bill and Ted's Excellent Adventure, I highly recommend you give it a chance. It's a movie full of laughs, history, and a great lesson about being excellent to each other no matter where or when you come from. Not to mention hearing Abraham Lincoln (Robert V. Barron) declare that we should all "party on, dudes!" (105 min.) Δ