The play Anne of Green Gables will be on stage at St. Peter's By The Sea Episcopal Church in Morro Bay through Dec. 16. Tickets range from $15 to $20. Visit bytheseaproductions.org for tickets and more information.

It's safe to say that we could all use a little dose of optimism right about now.

Maybe that's why the classic 1908 novel Anne of Green Gables, by Canadian author L.M. Montgomery, with its ever hopeful yet quirky and complicated protagonist, has made a recent resurgence with the new Netflix show, Anne With An E, and locally on the stage in Morro Bay at By the Sea Productions. 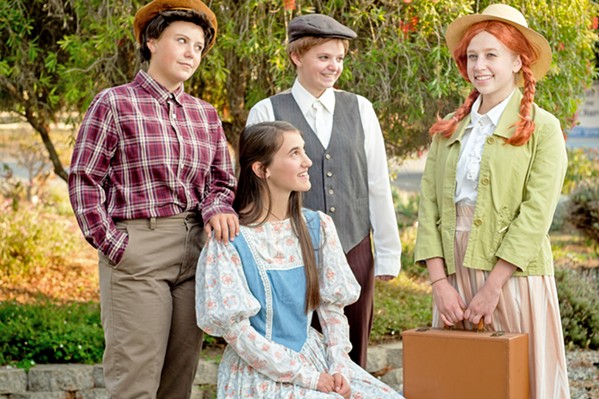 Adapted by Sylvia Ashby, directed by John Battalino, and set in the late 19th century, the story follows the adventures of Anne (Becca McHenry), an 11-year-old orphan in Canada. After a simple mix-up, Anne is adopted by two aging, unmarried siblings, Matthew (Ed Galena) and Marilla (Sholly Von Stein), residents of the fictional town of Avonlea on Prince Edward Island. When the quiet Matthew goes to the train station to pick up the expected orphan boy, who is supposed to help the old man out on the farm, instead he gets Anne, a decidedly precocious, creative girl longing for a place to call home, but struggling to reign in her temper while staying true to who she is.

A sunshine-spewing, Pollyanna-type figure Anne (who would much prefer to be called Cordelia, thanks) is most certainly not. Sure, Anne embodies optimism in certain moments, like when she tells Marilla, "Tomorrow is a day with no mistakes in it." But above all, Anne is fiercely honest and true to herself, as when she yells at Marilla, "I'm in the depths of despair!" when the matron considers sending Anne back to the orphanage. And Anne is the perfect almost teenager when she yells, "Red hair is my lifelong sorrow!"

The set rotates mainly between the home Matthew and Marilla share, dubbed Green Gables, and the schoolhouse that Anne attends. McHenry plays a passionate and fierce Anne, in addition to being convincing as a much younger girl in the first part of the play. Von Stein evokes Marilla, a stern and wise mother figure, well. She's cautious and slow to give her heart over to this strange, new child who's suddenly in her life. Galena as Matthew is quiet, reserved, and instantly charmed by Anne. The story even gives him some feminist leanings when Anne wins a scholarship to college and he tells her, "Well, now I'd rather have you than a dozen boys, Anne, just mind you that."

And, of course, there is love and friendship in store for Anne in the form of Diana Berry (Sophia Lea) and Gilbert Blythe (Sierra Redman). A meddling mom tears apart Diana and Anne, who quickly become "bosom buddies." And, as Anne puts it, years and years keep Anne and Gilbert from becoming close after he calls her "carrots" in reference to her red hair.

Twists and turns lead Anne to unexpected places, like the academy in Queens, where she's on track to apply for college as she hones her talent as a burgeoning writer. When tragedy strikes, Anne and others in her life are able to see how much she has truly grown. But at the end of the day, she wondrously still feels like she's remained true to herself.

"I'm not a bit changed—not really," Anne explains. "I'm only just pruned down and branched out. The real me—back here—is just the same." Δ

Arts Writer Ryah Cooley spells it Ryah with an "h." Contact her at rcooley@newtimesslo.com.