Another kind of thinking

In a SLOMA screening, Gerhard Richter Painting gets inside the artist's head

Gerhard Richter Painting is a film that stares. Director Corinna Belz’s documentary on the contemporary German painter—screening at the San Luis Obispo Museum of Art on Monday, April 15, at 7 p.m.—takes long, unblinking looks at Gerhard Richter and his artistic process. Often, once a shot has been framed, it stubbornly stays put, even while its ostensible subject—Richter himself—moves in and out of view. 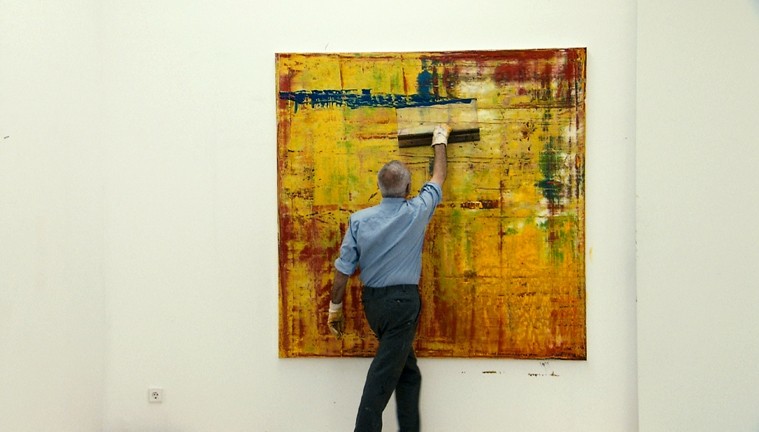 Belz first captured the media-shy artist in her 2007 documentary short Gerhard Richter’s Window. It was the first time the artist had agreed to be filmed in 15 years. It’s quite astonishing, then, that Gerhard Richter Painting, Belz’s feature-length follow-up, should grant the viewer such an intimate look at Richter at work in his studio. For most artists, the white canvas is intimidating enough without the presence of a camera silently awaiting the first stroke, but that’s exactly what Richter allows Belz to capture. The resulting film is by turns revealing, deep, comical, meditative, and even mundane—a realistic look at the life of a famous artist.

The 2011 film, shown in conjunction with the painterly exhibits “Brushstrokes 2013” and “Schwinnderful,” opens on Richter himself fiddling with the camera tripod with which his work is to be filmed. Once that’s underway, we’re treated to close-ups of an abstract painting in progress. Dragging a large squeegee across the still-wet paint, the artist moves through the frame, making an elegant blur of the bright colors on the canvas. He stands back, considering it.

The Blur, is it’s called, hearkens back to Richter’s earlier work. The artist would paint incredibly realistic portraits and then distort them with a squeegee or brush. These masterfully rendered works resembled photographs, but the blur brought the viewer’s attention back to the physical act of painting, pointing out its illusions, the medium’s physical consistency. His abstracts employ a similar idea, but this time without any representation at all.

Three models of upcoming exhibits—three-dimensional floor plans detailing where the pieces will go—rest on worktables. There are plans for the Pompidou, the Tate Modern, and the National Gallery in Berlin.

Richter’s ever-changing work has made him an important figure in contemporary art. He also ranks among the world’s top-selling living artists. As with any person so famous, successful, and gifted, others tend to examine the minutiae of his life for clues to his greatness. Belz seems to look to the ingredients of his paintings for such clues, filming his assistants preparing the paint for his abstracts, noting the colors he uses—cadmium red, ultramarine, lemon yellow—as if these names could reveal some insight.

The artist’s general good-naturedness about being filmed is one of the pleasant surprises of the documentary. But he does admit, in a period of creative block, that perhaps painting under observation doesn’t work so well, comparing it to being in the hospital. From behind the camera, we sense Belz faltering a little, in her voice, perhaps, a hint of concern about how the film’s concept is working out, worry that her presence is derailing the process she’s there to document.

Afterward, when Richter leaves the studio to clear his head, Belz intercuts a shot of him sitting outside, his back to the camera, with a shot of the unfinished subject of his quiet frustrations, as if to suggest its persistent presence in his mind.

The film never relies on talking heads or narration to tell Richter’s story, much of which we are expected to know already. Instead, Belz catches Richter during short breaks from painting, inquiring into everything from his artistic choices to his upbringing in the former East Germany, from which he defected as a young man, never seeing his parents again.

(Often, when Richter speaks, the film maintains its quiet stare, even after he’s finished, leaving him to mumble something to fill the silence and shuffle in place.)

Today, all he has left of his parents is a collection of old black-and-white photographs, which he’s brought with him from place to place, each time wondering if he shouldn’t just throw them all away. The gray tones of the photographs inspired Richter, as a young man, to paint a series of entirely gray paintings, which became a sort of meditation, perhaps, on the act of painting: Richter observed that even among these simple and seemingly identical works there could be found differences in quality. Some were still better than others, he says. What makes one abstract painting superior to another is still a persistent theme in his work today.

Such questions lead to wonderful conversations. We listen in as Richter is challenged to define the concepts of “right” and “wrong” and even “truth” as they pertain to abstract painting. In archival footage, a young and already very serious Richter explains his view of painting as a “moral act” and “another kind of thinking.” The film is less concerned with history and more interested in the exchange of these subtly provocative ideas.

After getting to know Richter in the almost meditative stillness of his studio, we forget about his status in the art world at large—“out there,” as he often vaguely refers to it. At his art openings, when he’s swamped by reporters, photographers, and admirers, we’re again reminded of this. (“Is it possible for an artist to be too hyped during their lifetime?” one journalist asks, walking with brisk, sideways steps to keep up with Richter, who looks like he’s trying to escape as politely as possible.) These moments are portrayed fleetingly, however before we cut back to the studio, the stillness, and the staring.