Firefighters extinguished another brush fire in the Salinas Riverbed on July 22 in Paso Robles, less than a week after the city declared the river a public safety emergency. 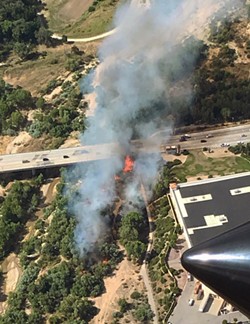 The fire started around 6 p.m. in the riverbed just north of the Highway 101 and Highway 46 east intersection. A crew of 62 firefighters from several departments contained it to 2 acres.

Investigators later found matches and a lighter near the area of origin. There are no suspects in the case, and it remains under investigation.

Causes range from fallen-over candles to warming fires to cooking fires, he said. Cases of suspected arson are rare. Typically, there are no witnesses or suspects.

"The people who started them flee the area," Stornetta said. "When you go down to the riverbed, there's no one around."

Paso has one riverbed fire case that it plans to send to the SLO County District Attorney's Office for potential prosecution.

"We were able to locate a suspect that it was his camp [where the fire started]," Stornetta said.

The city's July 16 emergency proclamation sets the stage for a proposed $361,000 cleanup of the river vegetation and the homeless camps.

Stornetta said the fire department is working with a biologist to conduct a survey of the area and is reviewing private contractors to help with the project.

"We expect our numbers to continue to grow if we don't get down there to do some hazardous fuel reduction," he said. Δ