'Ant-Man and the Wasp' is serviceable action comedy

ANT-MAN AND THE WASP

Glen Chalk this film up as another serviceable action comedy with enough derring-do and laughs to make a trip to the theater worthwhile. As a character, Ant-Man is certainly a lot more fun than dour Batman or goody-two-shoes Superman—he's fallible, irreverent, and generally loveable, in part because he's trying so hard to be a good dad to Cassie (Abby Ryder Fortson). The running gag is Scott is under house arrest for two years because he joined Captain America to save the world in Germany, breaking international accords. Superheroes may save the day, but they leave a wake of destruction, too, and Scott must remain housebound with an ankle bracelet, under the watchful eye of FBI Agent Jimmy Woo (Randall Park, at his deadpan funniest). Woo is always one step behind Scott, and his bits are even funnier than the three hapless thieves-turned-security experts—Luis (Michael Peña), Dave (Tip "T.I." Harris), and Kurt (David Dastmalchian)—who tried to rob Dr. Pym in the first Ant-Man film and now run a security company. In addition to dealing with Ghost, Scott and company have to watch out for Sonny Burch (Walton Goggins), who like Ghost is desperate to steal Pym's technology. Meanwhile, Pym now believes his wife Janet Van Dyne (Michelle Pfeiffer), who's been lost in the "quantum realm" for 30 years, is alive, and that it may be possible to rescue her. There's obviously a lot going on, especially when you add in Scott's ex-wife Maggie (Judy Greer)—mother to Cassie—and her husband, Paxton (Bobby Cannavale), as well as Pym's ex-partner Dr. Bill Foster (Laurence Fishburne), who appears to have a hidden agenda. Though it seems like a lot to keep track of, the plot is clearly delineated, the action sequences are trackable and exciting, and the one-liners come fast and furious. It's not going to win any awards, but for summer fun, it does the trick.

Anna I prefer superhero flicks that lean on humor as opposed to taking themselves too seriously, and the Ant-Man films fall squarely in that category. Funny dude Rudd is not what first comes to mind when casting the hunky, brooding figure behind most caped crusaders, but I for one am grateful for the change-up in action hero image. These stories are supposed to be fun after all! While this sequel didn't wow me as much as its predecessor, it still was a followable storyline that stayed true to its quippy, sassy self. The story starts with Scott doing anything and everything to keep Cassie entertained over the few remaining days of his house arrest. When the games get a little rough and Scott's ankle winds up through a fence board, FBI agent Woo is knocking down his door desperate for a "Gotcha!" in the final stretch of Scott's two-year sentence. Park is great as determined agent Woo, who's hell-bent on catching Scott up to his old tricks. While Ant-Man and The Wasp leaves a pretty forgettable mark on the film world in general, it's a bunch of rollicking fun and adventure perfect for an afternoon in the theater when you're looking to beat the heat.

Glen Rudd is particularly suited to the character. He's sort of a hangdog everyman, but he's also funny, charming, and good looking enough to be a credible love interest to Hope. Yes, he seems to screw things up over and over again, but his heart's in the right place. Lilly as Hope is much more competent than Scott, and a strong female character in a superhero movie is always a welcome respite from the boys' club. There's some nifty age-reducing CGI for the backstory about Pym and his wife, Janet—both are made to look young again. It certainly adds to the realism of the pre-story, in which Pym and Janet as Ant-Man and The Wasp disarm a Soviet nuclear missile heading to the U.S. The whole quantum realm thing, however, feels like a lot of nonsense. There's no mention of how Janet survived for 30 years shrunken to subatomic size, how she ate, what continued to power her superhero suit, etc. This is definitely the sort of story you don't want to think too hard about because it's silly and absurd. But when the fists are flying or the cars are racing, moving from super small size to super big, it's best to disappear into the moment and go with it. It's summer, and you should expect massive, idiotic, popcorn spectacles for the foreseeable future. Turn off your brain, strap into your theater recliner, and order a bucket of popcorn because summer blockbuster season is in full swing. 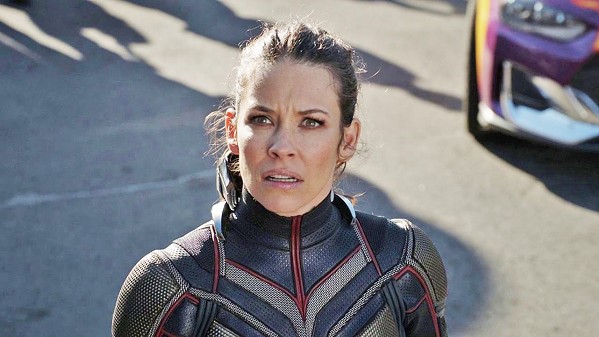 Anna The trailers before the film alone are enough to remind us that summer is here and so are big, dumb movies to go alongside backyard barbecues and spray-on sunscreen. It's nice when a summer blockbuster comes along and rises above mediocrity, and harebrained quantum storyline aside, Ant-Man and The Wasp is a solid dose of fun that keeps its groan moments low and even manages a good few jokes along the way. While the storyline regarding rescuing Janet from the beyond does seem ridiculous, it's a convenient way to mash these characters back together after Ant-Man's detour into the Avengers' universe. If you head into a theater with overly high expectations for a film like this, I think you have no one else to blame but yourself if you leave disappointed. It's a sequel, a superhero flick, a tie-in to a bunch of other Marvel characters, and so on and so forth. Of course it's going to have some problems plot-wise or story-wise, maybe a dumb new character or side story that goes nowhere—that's the trappings of this kind of movie. Bottom line, this Ant-Man sequel is a fun, action-packed adventure with enough humor and hijinks to fill a couple of hours nicely, and I'm guessing if you enjoyed the first film, this sequel will satisfy. Δ