As Debbie Arnold and Ellen Beraud wrestle for the 5th District seat on the San Luis Obispo County Board of Supervisors, a recently formed political action committee (PAC) depicting Beraud as anti-veteran has spent nearly $50,000 to disseminate its message before the hotly contested March 3 primary election. 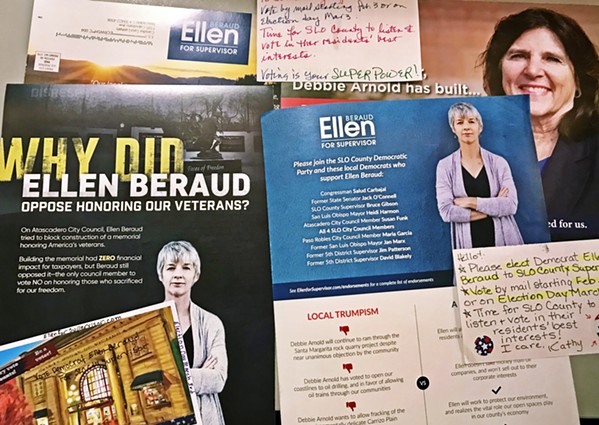 The PAC, created on Jan. 24 by a political consulting firm in Sacramento, aims to call attention to a 2007 vote that Beraud cast as a member of the Atascadero City Council, where she voted against approving a sculpture that's now part of the Faces of Freedom Veterans Memorial on Portola Road.

A recent mailer financed by the "Friends of Veterans in SLO County" PAC has the title "Why did Ellen Beraud oppose honoring our veterans?" and publishes critical quotes from two veterans. One, Dan Phillips, a Korean War Army vet, is quoted saying that Beraud's vote was "like a slap in the face to veterans."

"It's disappointing," adds Bart Topham, the other quoted vet. "I don't understand what reason she would have to do that."

The Beraud campaign has rebuked the ads, which, according to campaign finance documents, will continue running in print, radio, and digital formats. Beraud claims the messages are misrepresentations of her 2007 vote.

According to video of the March 27, 2007, Atascadero City Council meeting, Beraud requested a more in-depth discussion of the veterans memorial project, which was up for council approval. While the city's Parks and Recreation Committee had recommended approval, the city's Ad Hoc Art Committee voted against the sculpture because of its design. After a long public comment period, which included residents speaking both in support of the memorial as it was proposed and against it for artistic reasons, Beraud cast her lone dissenting vote.

At the meeting, Beraud said that while the memorial was "honorable" and had "her full support" in concept, she could only vote for a sculpture that had the Art Committee's blessing.

"The proposed location is public land and that requires public review," Beraud said at the time. "The controversy is about the sculpture being shown here."

As the Friends of Veterans PAC highlights her vote against the memorial to oppose her 2020 campaign for supervisor, Beraud hasn't shied away from the topic, recently committing an entire campaign mailer to it.

"Some are attempting to rewrite history by falsely claiming that I opposed the memorial and am anti-veteran. Nothing could be further from the truth," Beraud writes on the mailer, which includes a photo of her with a group of vets. "I have the greatest respect for those who fight for freedom throughout the world and our veterans here at home."

SLO County District Attorney Dan Dow, Daou Vineyards, and Covelop Inc. are among its donors. Covelop CEO Pat Arnold declined to comment on a $5,000 donation. Dow and Daou Vineyards did not return a request for comment before press time.

As the Arnold campaign benefits from the efforts of an independent PAC, the Beraud campaign is also getting a boost from an outside organization.

Beraud is candidate No. 192 on "Postcards to Voters," a Georgia-based advocacy group that mobilizes volunteers nationwide to write handwritten postcards—at no cost to the candidate—to voters in various election races for Democratic candidates.

On Beraud's campaign page on the Postcards to Voters website, the SLO County Board of Supervisors is described as "controlled by a Trump-Republican majority, led by Debbie Arnold who Ellen is running to unseat." It urges volunteers to write postcards ahead of the March 3 election to reach vote-by-mail residents.

"SLO County remains a red island in the middle of the California coast," the page reads, "with a governing majority out of step with the residents of the community. ... SLO County's 5th District is the swing seat, and it has flipped back and forth between Democrats and Republicans every eight years for about as long as anyone can remember. ... Postcards to Voters in this race could be the difference between Ellen winning and losing."

Clarification: This article was edited to clarify a donation associated with Jordan Cunningham. Δ