Anything is possible when you work for the circus! 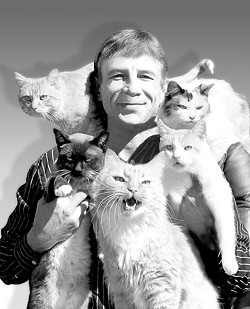 “I hope those cats are unionized,” one viewer comments on the YouTube video “Popovich and his circus cats.” The fourth-generation Russian circus performer, who rescues all of his furry co-stars from animal shelters, can be seen walking across the stage while a sleek black cat deftly weaves its way around his ankles. A beautiful calico twirls around on a plush stool, before jumping through a proffered hoop with ease and grace. Still another, an off-white fluff ball with a regal countenance, shimmies across a bar and down a pole, like a tiny firefighter, into the welcoming arms of Gregory Popovich, who lifts the animal briefly into the air to thunderous applause.

The anonymous viewer’s tone of amusement-bordering-on-concern is a standard American reaction. As most people in the United States can barely get their cats to come when called, we regard anyone who exhibits mastery over the domestic cat with awe, often followed by suspicion: What has he done to coerce those poor creatures? How dare he?

In reality, Popovich explained to New Times, the animals he performs with are only exhibiting their natural habits, encouraged by months of practice, praise, and the kind of patience most Americans don’t have. All the animal stars in Popovich’s act, which includes dogs and geese, have a natural “trick” they like to do for fun. Some are climbers, some are jumpers, some are crawlers, and some, like the kitty in the video, are natural-born ankle-weavers.

“The best way, when you work with animals, is to do what they like to do, and build the story around their personality,” he explained.

A pet theater show was an obvious career choice for Popovich, who grew up in a circus family, surrounded by animals.

“My mom worked with dogs,” he said. “Because my first friends were dogs, I had good communication with pets.”

While any performance with live animals is gutsy, Popovich’s interaction with housecats is especially impressive. The length of time it takes to train a cat, Popovich said, “depends on the kitty character. Some cats are brave, some a little bit shy. So between three to six months it takes to bring the kitty onstage.”

Popovich once worked for the Moscow Circus as a juggler and clown. After bringing his juggling act to the States, he wanted to incorporate some animals into the performance. He paid a visit to an animal shelter, and, like many such visitors, was deeply saddened by the sight of “so many wonderful pets looking for masters.” Most of all, he said, “I was shocked at how the pets get to the shelter. I found out that it was sometimes very primitive reasons.”

A parent would buy a puppy for a child as a gift, for example, realizing only later that no one could take care of the animal. “It’s like a toy for the kid,” Popovich added. He began to adopt the abandoned animals, giving them a second chance in his show.

The performer insists his pets aren’t made to do anything they don’t want to. The acts are built around each animal’s personality, and for every act featuring the finicky housecat, Popovich has several “backup kitties” able to step into the limelight if another cat chooses to ignore him that day.

Popovich’s animals live arguably better than many humans, traveling in a custom-made, air-conditioned trailer, pampered by a team of groomers, and starring as furry doctors, firefighters, and football players.

The technique of building a show around the animals’ natural quirks was working just fine—until Popovich adopted the laziest dog he’d ever met.

“He just wanted to lie down on the couch,” Popovich. “I didn’t want to bring him back to the shelter, so I created for his character a role as The Lazy Student.”

In the act, which became known as Dog School, the animals all sit at desks like eager pupils. But The Lazy Student refuses to learn, and only looks on with glee as Popovich playfully reprimands: “Hey! You didn’t do your homework.”