The recently released findings of an ongoing Scripps Institution of Oceanography study are at the center of yet another debate over potentially dangerous dust emissions at the Oceano Dunes State Vehicular Recreation Area (SVRA) and what role off-highway vehicle activities play. 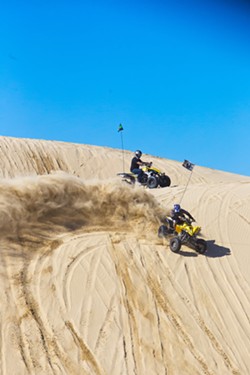 Scripps is in the second of a three-year investigation into the land and sea sources that contribute to the airborne particulate matter that is often detected in the Oceano Dunes and Nipomo Mesa. On Sept. 20, Scripps released its preliminary results from aerosol measurements conducted in May, and the report suggests that the dust emitted from the Oceano Dunes is both less harmful to human health than previously thought and caused by natural sources rather than human activities.

Lynn Russell is a professor of atmospheric chemistry at UC San Diego, and she's one of the researchers working on the Scripps study, which she said is being funded by State Parks.

"We're just interested in getting the right science out there, so that people can make informed decisions," Russell told New Times.

There are two kinds of particulate matter regulated by federal clean air standards: PM2.5 and PM10. The numbers refer to the diameter of the particles, and any particle with a diameter of 10 microns or less is inhalable and considered potentially dangerous to human health. While sources of PM2.5—combustion particles, metals, and organic compounds—are considered most dangerous to human health, sources of PM10—dust, pollen, and mold—are also often problematic.

Russell said Scripps' recent findings mostly focused on sources of PM2.5 at the Oceano Dunes, which she said were previously attributed to potentially harmful mineral dust and emissions from vehicles at the dunes. But in the May measurements, Scripps researchers found that mineral dust only accounted for a fraction of PM2.5 detected at the dunes, and that a majority can be attributed to sea salt and other organic components, ammonium, and nitrate blown in from the ocean.

"This result means that a substantial fraction of PM2.5 was not associated with fossil-fuel combustion emissions," the Scripps report reads, "so that PM2.5 is not a good predictor of toxic emissions or health effects for this location in high wind conditions."

"The association of high PM10 and PM2.5 with high wind conditions, even when recreational vehicles were not allowed at Oceano Dunes, indicates that dune-derived mineral dust is more likely to be caused by natural forces (i.e. wind) rather than human activities," the report continues. "While the short duration of this study provides only limited statistics in support of this result, the longer records provided by APCD provide additional confirmation. For this reason, the high dust concentrations measured on high wind days in and downwind of Oceano Dunes are likely dominated by natural saltation processes associated with the indigenous geomorphological dune structure."

But Air Pollution Control District (APCD) Officer Gary Willey questioned the methodology used by Scripps researchers, and said the results of one brief study don't diminish the years of research conducted by the APCD that show that a majority of Oceano's dust emissions come from the park's off-highway vehicle riding areas.

"It doesn't water down our data," Willey said.

Willey said that the APCD agrees that much of the particulate matter detected in the Oceano Dunes SVRA comes from natural saltation and that dust emissions in the area are worsened by high winds.

What's not normal, he said, is the decades of degradation and damage to the topography of the dunes, which he said is caused by vehicle activity in the park. That's what really makes the area vulnerable to emitting dust during high winds, and Willey said that decades-old problem won't change just because the dunes have been closed to vehicles for six months. It would take years of closures to vehicles to see any changes to the topography of the dunes and thus a decrease in dust emissions, he said.

Plus, Willey added, the Scripps study used different research methodologies than those that are recommended by the Environmental Protection Agency and used by the APCD. Scripps also focused solely on PM2.5 when Willey said APCD is actually more interested in PM10 at the Oceano Dunes.

"It just serves the purpose of the riders who want to believe that riding is not part of the problem," Willey told New Times. "And it is."

All of this, Willey said, will be addressed at a virtual public workshop coming up on Oct. 23. Δ