The Martha Graham Dance Company gets down to the essentials 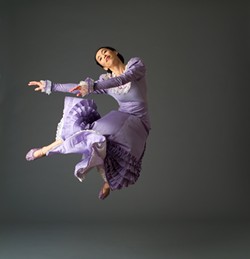 The Martha Graham Dance Company is charged with a multitude of difficult tasks: to pay homage to an artist who has been dead for 19 years, to share her legacy and aesthetic with new audiences without the established framework of a museum that the visual arts have long utilized, and to create new works that continue the artistic revolution she began in the ’30s. Striking a blow towards that second aim, the company will be performing Essential Graham, selected pieces of her work, on April 27 at the PAC.

The task of programming the show for the company’s spring tour fell to Artistic Director Janet Eilber, who focused on creating a context for the works the company would perform. The show’s first segment, aptly titled “Prelude and Revolt,” features a montage of three solos created in the style of Ruth St. Denis and Ted Shawn, of Denishawn School of Dancing and Related Arts. Graham was their student for a time, before turning from their, and all other, established dance styles.

“It’s a style of dance that she rejected,” explained Eilber. “We use photos and narration to help the audience remember that America was becoming a world power and we were searching for our own forms of self-expression. The audience has now entered into Martha’s world. It’s a great introduction for the classics.”

These solos are followed by three works choreographed by Graham—“Seranata Morisca,” “Lamentation,” and “Steps in the Street”—representing the beginning of her revolution. According to Eilber the latter is a powerful feminist statement, against war, against tyranny, and against censorship. Graham choreographed the piece the same year she rejected an invitation from Adolph Hitler to dance at the 1936 Berlin Olympics, writing that she would not align herself with a regime that abused Jews, artists, and intellectuals. The next phase of the performance is Eilber’s answer to the impetus to make new work. In September of 2007 Eilber gave three choreographers—Richard Move, Larry Keigwin, and Bulareyaung Pagarlava—a video of Graham’s “Lamentation.” Each created a response, using their own style, and “Lamentation Variations” premiered on Sept. 11, 2007 in New York. Eilber calls the effort, “dipping our toe in the water,” in terms of creating a new body of work.

After a brief intermission, the company will perform a suite from “Appalachian Spring,” (the term spring referring to a source of water rather than season). Aaron Copeland created the score for the production, and Graham collaborated with Copeland from opposite ends of the country, sending letters with eloquent descriptions of what she wanted the movement to achieve. Eilber paired the choreography with narration of passages from Graham’s letters

“It’s not a lecture demonstration,” insisted Eilber. “We’re doing it theatrically so they really see the dance in all its glory. It was before TV so people really knew how to write. She described the bride as ‘she had an electric eagerness for life.’”

The production debuted in 1944, smack in the middle of the decade when Graham created the majority of her better-known masterworks. It was also the decade when she first allowed men to join her dance company, opening new realms of experimentation and possibility. Graham was regularly working with the best-respected choreographers of her time.

The final piece, “Diversion of Angels,” debuted in 1948 in Connecticut. It was one of the first works that Graham choreographed but did not actually dance, a piece without plot, situated in an imaginary garden. Graham was inspired by a streak of red in a painting by Wassily Kandinsky, and intended to make a dance featuring the passionate flash of red. “Diversion of Angels” turned out to be that work, with a dancer in red—representing the passionate phase of love—streaking past. It’s one of Graham’s rarer lyrical moments, featuring three couples wearing colors that indicate the phase of their love—yellow for youthful love, red for erotic love, and white for mature love. They are all part of the same woman, Kandinsky’s flame, and the yields of Graham’s imagination.

What Graham would think of the troupe’s efforts to preserve her work—specifically experiments with new ways to create a context for her choreography—remains a mystery. But Eilber is quick to point out that Graham was a dancer not at all afraid of evolving.