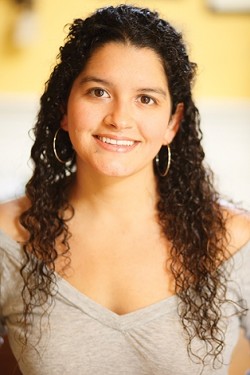 # When aspiring chef Lauren Rigby walked into the Apple Farm in SLO to submit her favorite apple cake in the restaurant's inaugural apple contest, she saw her competition and began to fret.

"I said to my boyfriend, 'Look at all of these pies and cakes so many grandmothers have baked. How am I going to win?'" recalled Rigby, who's only 23 years old.

Describing herself as very nervous, Rigby admitted that she couldn't stand just dropping off her cake and walking away. She was compelled to stay and watch the judging. Good thing she did: It provided her the joyous experience of hearing her name announced as the winner.

"This is the only apple dessert I absolutely love. It's my grandma's recipe," explained Lauren, recalling her family's holiday parties when she would hang out in the kitchen to help her maternal grandmother cook for their large family gatherings.

Rigby admitted that this was her first entry in a cooking contest: "I used Braeburn apples, my favorite apple to eat."

Her grandma, however, used Pippin apples.

"The brandy sauce is my recipe," she said. "I was pretty surprised [about winning], but I know it's a great recipe."

Apple Farm's Director of Food and Beverage Michael Langlois remembered Rigby nervously watching the judging of the "How Do You Like Them Apples?" dessert contest. He says that they received nearly 30 entries that included cakes, Danishes, pies, and bread puddings. It was such a success, they'll hold the contest again next November. Rigby, originally from Madera--where her parents still live--currently works at Pelican Point Restaurant in Pismo Beach in banquets and catering.

I was quite impressed by this passionate young woman who's clearly on the road to stardom in the culinary world if she follows her dream. She told me that she loves cooking for banquets, baking, and creating sauces.

# "My big dream is to have a family and start a catering business," Rigby said. "I love cooking for lots of people."

This talented young cook is certainly off to an admirable start.

Rigby's first-place-winning dessert will be available at the Apple Farm by the slice, or you can pre-order her Grandma's Apple Cake with Brandy Sauce during the month of January 2008.

INFOBOX: Save room for dessert

You must try Lauren Rigby's easy recipe for her grandma's apple cake. It confirms my belief that simple preparations often result in the tastiest treats.

Preheat oven to 350 F. Stir apples into beaten eggs in a large bowl and set aside. Combine oil, sugar, cinnamon, nuts, and vanilla, and stir into apple mixture. In a separate bowl, combine flour, salt, and baking soda, then add to apple mixture. Stir until evenly blended and pour batter into a pre-greased 9-by-13-inch baking pan. Bake for 50 minutes.

In a mixer, combine cream, butter, and sugar. Stir in vanilla and brandy. A dollop of this hard sauce will melt into a warm piece of apple cake.

Two years ago, I visited New York City on vacation with my husband Dan, and we hit the jackpot. Not the lottery, silly, but it was certainly my idea of hitting the big time--it was Restaurant Week. For a foodie, that's the equivalent of finding Ralph Lauren clothing at deeply discounted prices. That January, we dined in the city's finest restaurants, enjoying three-course dinners for only $29.99 per person. That's the price of a single entree in most upscale restaurants, even here in SLO County. This deal isn't limited to a fixed menu, either. Most restaurants offer a choice of two or three selections in each course for an appetizer, entree, and dessert. Needless to say, I made reservations at top restaurants like Mesa Grill with TV star chef Bobby Flay (despite my skepticism, we loved the food) and Vong with the highly respected French chef Jean-Georges Vongerichten. Now the wise marketers in SLO County have brought the same concept here, but ours will last 30 days in January. Outstanding!

If you've steered clear of restaurants like Hoppe's, Lido, or The Park because you were afraid you couldn't afford them, this is your chance to enjoy their fine cuisine at a guaranteed low price. They, among our other fine restaurants in SLO County, will provide a special three-course menu that the SLO Visitors and Conference Bureau (SLOVCB) is promoting as: "30 Dollars, 3 Courses, 30 Days." Visit any town from Paso Robles to Pismo Beach and you'll find several restaurants offering this incredible deal. Some restrictions apply, including The Park, because it will be closed the first two weeks of January and Deborah's Room, which will only offer one table per night (this special winery restaurant only has six tables). Johanna Koch, the marketing director for SLOVCB who's coordinating Restaurant Month, has done a great job of bringing together our best local restaurants.

"Just as we're known for our great wineries, we want San Luis Obispo County to be known as a culinary destination," Koch explained. "Guests who participate will also receive a sale brochure offering special values at 30 local businesses, with discounts ranging from restaurants, specialty food shops, and wine tasting rooms, plus a Morro Bay harbor cruise and a two-for-one round of golf."

Even more enticing, you can check out each restaurant's special menu in advance on the SLOVCB's website, making it even easier to decide where to dine during this outstanding event.